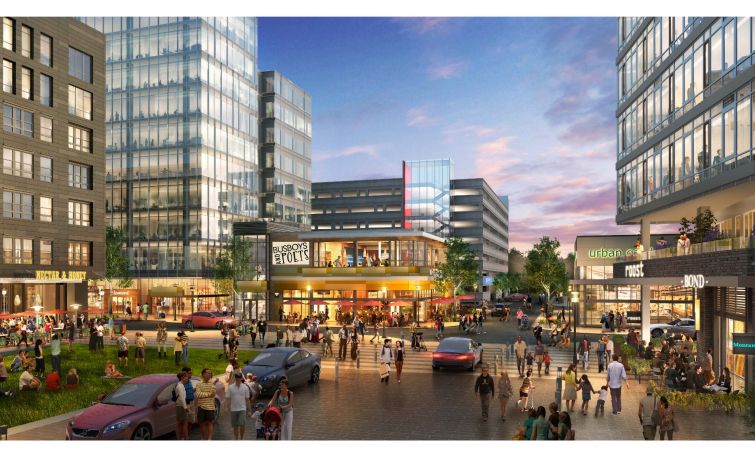 A rendering of the Merriweather District Howard Hughes Corporation

Bookstore Busboys & Poets has signed a long-term lease for 10,700-square-feet at the intersection of Mango Tree Road and Valencia Lane in the Merriweather District in Columbia, Md., according to The Howard Hughes Corporation, which is developing the 391-acre mixed-use neighborhood.

The retailer, which has locations in seven neighborhoods in the Washington Metropolitan area including 2021 14th Street NW, 450 K Street NW, 625 Monroe Street NE, and 4251 Campbell Avenue in Arlington, Va., will take up a two-story, stand-alone building in the center of the development, Greg Fitchitt, president of HHC’s Columbia’s region, told Commercial Observer.

The space, which will be the bookseller’s largest in the region, will include a bookstore, a cafe, and an event space with indoor and outdoor seating on both levels. The store is expected to open next year.

“Our vision to transform Columbia into a leading hub where creativity can flourish aligns perfectly with Busboys & Poets’ civic-minded business model,” Fitchitt said.

“The Merriweather District is being positioned as a regional hub for culture and commerce and will always have a strong tie with the arts in Downtown Columbia,” Fitchitt said. “Anchored by Merriweather Post Pavilion, music and art influence the entire cultural fabric including the street names.”

In July, CO reported that cybersecurity firm Edwards Performance Solutions inked a deal for 9,000 square feet at One Merriweather at 10980 Grantchester Way, while specialized IT firm Data Canopy moved into a 2,500-square-foot, spec-suite space at 10500 Little Patuxent Parkway.