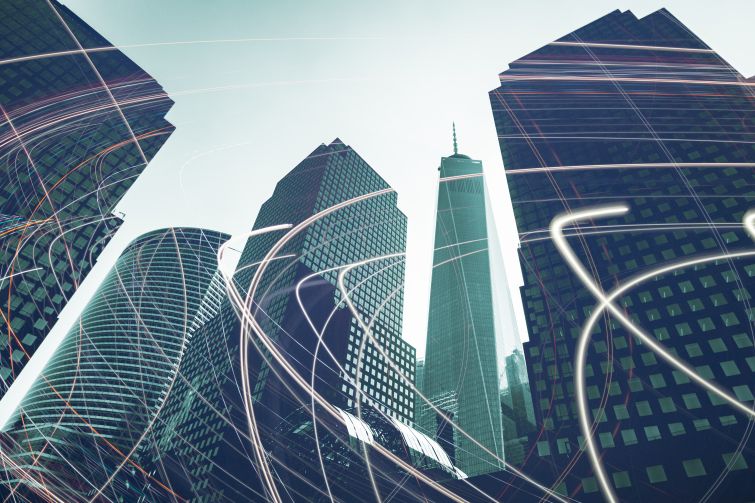 Sarkis kicked things off by noting that over 20 proptech start-ups have achieved unicorn status since 2014, and that studies show that almost 80 percent of CRE professionals feel that tech innovation has increased in the past year.

Nelson noted that global proptech investing has been increasing 36 percent year over year. Addressing why CRE tech has blossomed, he explained that “brokers using these new tools are seeing that it makes their business that much more efficient,” and made the point that technology has greatly improved work flows and the deal-making process, recalling the arduous old days where brokers had to obtain building information by waiting in line at the buildings department. He talked about how transformative it was when former New York City Mayor Michael Bloomberg opened the books on real estate data and argued that the move left brokers with little choice but to embrace technology if they wanted to be competitive in the tough New York market.

Addressing the current “gold rush” of new tech companies trying to find their niche, Nelson emphasized the challenge of integrating new technology for large companies, as their tech has implications across various offices. “One of the beautiful things about technology and information is that it can help align all of our offices,” he said, “but if you have different offices using different technologies, that only further complicates things.”

But, Nelson emphasized, any firm representing owners and marketing properties that isn’t investing in technology will be left behind.

Sarkis said that for brokers to survive this new technological age, they’ll need to be viewed not just as order takers but as trusted advisors. He recalled how, when he started Reonomy, he was nervous about what brokers would think of him providing the industry with much of the information they used to provide. But now, he said, brokers “adopt us the most, because they’ve figured out that it’s an enablement tool.”

Discussing tech innovation they hope to see within CRE, Orso hopes for predictive analysis to provide deeper insights into global capital flows, and also on “where [consumer] dollars will be spent, how they will be spent, and what’s the best way to market to a younger generation that doesn’t necessarily watch TV.”

Sarkis summed it up: “Predictive analytics is the next great frontier in how tech will be leveraged. In the early innings, tech was helping you see in front of you more clearly, opening your eyes and widening the aperture. Now that folks have done that, it’s about, how do I not just see what’s in front of me, but see around corners? How do I know [what’s] next?”