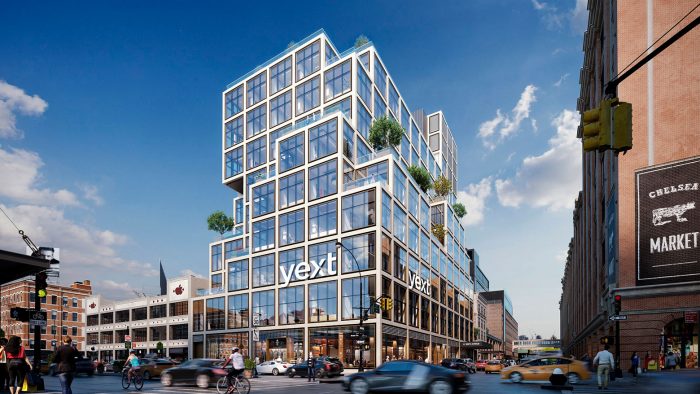 Yext signed a 12-year sublease with Aetna for the entire office portion of the Rafael Viñoly Architects designed 10-story 61 Ninth Avenue between West 14th and West 15th Streets, Crain’s New York Business first reported. It will invest about $150 million into the property for its build-out and rent, according to Yext.

The firm plans to move from its current offices at One Madison Avenue to 61 Ninth Avenue—which will be dubbed the Yext Building—in May 2020, the company said. It will pay around $1 million a month in rent when it first moves in and the amount will increase to about $1.1 million in 2025, Yext said.

Yext plans to create 500 new jobs over the next five years and grow its New York City headcount to more than 1,100, according to the governor’s office. If it hits those targets and retains those workers for five years, Yext will be eligible for up to $6 million in tax credits under the Excelsior Jobs program—the same initiative the state offered the bulk of the subsidies to Amazon to build a campus in Long Island City, Queens.

“Tech companies like Yext are thriving and expanding across the state thanks to New York’s top-notch talent, educational institutions and cultural resources,” Cuomo said in a statement. “We are proud to support companies that invest in New York State and grow our innovation hubs, which in turn attract more world-class businesses and further elevate our 21st-century economy.”

Yext was founded in 2006 by Howard Lerman, Brent Metz and Brian Distelburger and later grew to open offices around the world including Berlin, London and Paris.

“In 2006, when we founded Yext in New York City, everyone said it couldn’t be done,” Lerman said in a statement. “More than a decade later, our innovative products, world-class team, and massive opportunities are being felt around the world.”

The company will take over the space from Aetna which planned to move its corporate headquarters from Hartford, Conn., to Chelsea and signed a 13-year lease in Vornado Realty Trust’s 165,000-square-foot 61 Ninth Avenue, which will replace a former lumber yard, as Commercial Observer previously reported. The space will also have a 20,000-square-foot Starbucks cafe and roastery on the ground floor and lower level.

However, Aetna squashed those plans in January 2018 after the insurance provider was bought by CVS for $69 billion, The Real Deal reported. Instead, Aetna signed a 106,000-square-foot lease in One Soho Square in August 2018 to consolidate its offices at 100 Park Avenue and 133 Broadway, CO previously reported.

Neil Goldmacher and John Moran of Newmark Knight Frank brokered the sublease for Yext. It was unclear who handled the deal for Aetna. Spokespeople for NKF and Aetna did not immediately respond to a request for comment.