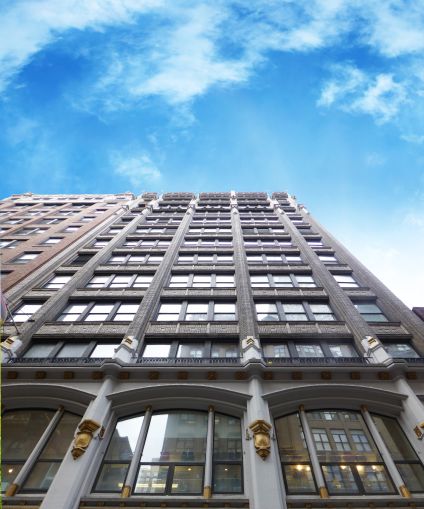 Another week and another Knotel lease.

The flexible office space provider inked a deal for 39,000 square feet spread over five full floors in United Group’s 29 West 35th Street between Avenue of the Americas and Fifth Avenue, Knotel announced. A spokeswoman for Knotel would not provide the terms of the deal, but CoStar Group data shows asking rents in the 12-story building range from $41 to $53 per square foot.

Colliers International’s Michael Cohen, John Pavone and Jessica Verdi represented Knotel in the deal while United Group handled it in-house with Roni Mova. Mova and a spokesman for Colliers did not respond to requests for comment.

Knotel—which Cushman & Wakefield determined was the second-largest coworking company in the city after WeWork—has been rapidly expanding its portfolio this year. (Disclosure: Observer Capital, led by Observer Media Chairman and Publisher Joseph Meyer, is a Knotel investor.)

The company already took more than 625,000 square feet around Manhattan this year with large deals like 60,323 square feet at 61 Broadway, 35,292 square feet at 45 West 45th Street and 28,405 square feet at 1407 Broadway. The deals along with the new one bring Knotel’s total footprint in the borough to more than 2 million square feet, according to Knotel.

“Landlords and occupiers alike are seeing flexible office as the new normal—a valuable way to manage their portfolios and real estate requirements,” Eugene Lee, Knotel’s global head of real estate and business development, said in a statement. “We are pleased to add another great location to our portfolio to meet the needs of our clients, and will continue to grow aggressively in New York City and beyond.”