A year ago, nobody knew what an opportunity zone was. Now, it could be the biggest thing to hit real estate development ‘maybe ever.’ 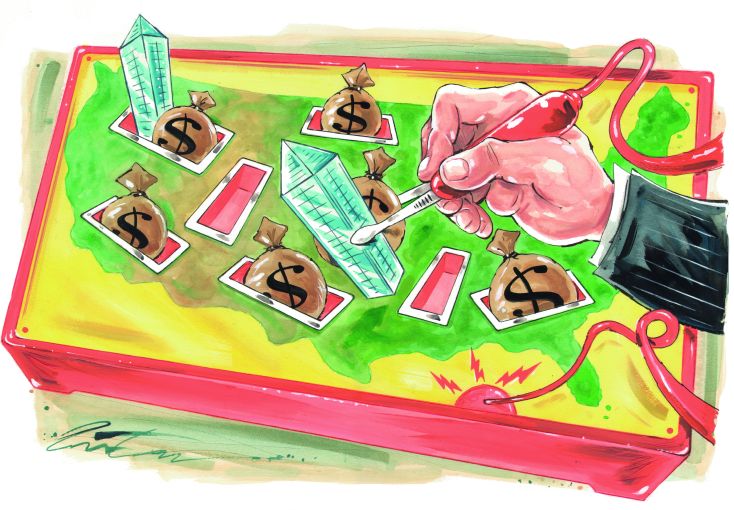 The federal Opportunity Zones program is expected to attract billions of dollars of investment into "economically distressed" areas across the U.S. Illustration: Russ Tudor/for Commercial Observer

Tucked into the federal tax reform bill that passed late last year, the “Opportunity Zones” program wasn’t designed specifically with real estate in mind. Rather, the provision—which provides significant tax relief to investors who pour money into designated, “economically distressed” areas across the country—is meant to spur investment across a wide variety of business sectors and industries.

And yet, due to the very nature of the program, it is real estate interests that appear most poised to benefit from its potentially lucrative tax incentives. Already, numerous real estate investment firms and financial platforms have launched funds seeking to raise billions of dollars with the goal of scooping up and redeveloping properties in designated Opportunity Zones.

The hope is that this capital will be able to regenerate and reinvigorate specific census tracts across the country that have been economically overlooked and underserved—areas nominated by the governors of all 50 states, and subsequently approved by the U.S. Treasury Department as eligible. In exchange, the Opportunity Zones program provides investors with the deferral, and eventually the exemption, of hefty capital gains taxes that they would otherwise incur.

The acquisition was Shorewood’s first through a new $250 million fund it launched with the purpose of investing in multifamily assets in Opportunity Zones across New York City. Davis noted that Shorewood “[doesn’t] do deals purely on tax incentives,” and described the Jamaica project as “economic on its own merit” and one that the firm “would have developed anyway.”

Still, he said the advantages granted by the Opportunity Zones program have proven a lure for investors, and particularly high-net-worth individuals seeking a way to reinvest gains on other investments without paying steep capital gains taxes. In March, public policy think tank Economic Innovation Group reported that, across U.S. households and corporate balance sheets, there is $6.1 trillion in unrealized capital gains that would be eligible for reinvestment in Opportunity Zones—a stratospheric figure indicative of the program’s potential.

Under federal guidelines, investors who pour such gains into “Qualified Opportunity Funds” are able to defer federal capital gains taxes through 2026. If they hold onto that Opportunity Fund investment for five years, they would receive a step-up in their basis and would only be on the hook for 90 percent of the gains tax that they would have otherwise had to pay on those proceeds; upon seven years, they would receive another step-up that means they would only have to pay 85 percent.

And even more enticing for investors is the fact that, should they hold onto an Opportunity Zone investment for a 10-year period, they would be exempt from having to pay any federal capital gains taxes at all upon divesting their interest.

Of course, there are certain restrictions that investors must adhere to in order to reap those benefits. For instance, Opportunity Zone funds must have virtually all of their capital dedicated to investment in Opportunity Zones, and they must have at least 90 percent of their total capital deployed at any given time. Additionally, such funds must double their basis over the life of a given investment—a “substantial improvement” provision that’s meant to prevent them from simply parking their money without pouring additional capital into the Opportunity Zone, and one that lends itself to redevelopment or new construction projects as far as real estate investments are concerned.

What’s more, the Opportunity Zones program and the guidelines governing it could look markedly different in the coming weeks, as the U.S. Treasury Department is expected to release an updated set of rules and regulations on the program this fall that could alter its complexion.

“What is still needed is details on the specifics—how the funds need to be set up, what gains need to be made to qualify, permissible investments, and a lot of the nuances you get in federal programs,” Steven Kahn, a director at affordable housing development firm Standard Communities, said of the guidelines still to come. “The strict rules and regulations that lay out a game plan for you, that is still missing.”

But that hasn’t stopped development firms like Shorewood, RXR Realty and Youngwoo & Associates, as well as investment platforms like Fundrise and EquityMultiple, from looking to raise billions of dollars dedicated specifically to investing in Opportunity Zones.

Youngwoo and EquityMultiple, for instance, announced a partnership this month that will see the two companies join forces on an Opportunity Fund targeting projects across the U.S. According to EquityMultiple CEO Charles Clinton, Youngwoo’s experience in markets like the South Bronx—a huge chunk of which has been designated as an Opportunity Zone—made the firm a logical partner, with Youngwoo handling development responsibilities while EquityMultiple will focus on raising and providing the capital for projects.

“I think there’s going to be a premium [for development opportunities] inside Opportunity Zones,” Clinton said. He cited Youngwoo’s redevelopment of the Bronx General Post Office at 588 Grand Concourse into a revamped commercial hub for the South Bronx as “almost the ideal example” of the type of “place-making project” meant to be brought to fruition by the program. Beyond New York, the Youngwoo and EquityMultiple fund will consider investing in Opportunity Zones across a diverse set of markets including Los Angeles, Oakland, Calif., Philadelphia and Seattle, he added.

While there have been concerns that the Opportunity Zones program and its incentives could end up spurring a wave of market-rate residential development in the areas in question—rather than the sort of affordable housing that’s in short supply in cities across the country—Clinton said he believes it “can be a positive catalyst” for creating new workforce housing in areas overlooked by this cycle’s urban development boom. That could be through the development of new affordable housing, or “market-rate [housing] in an area where the gap between affordable and market-rate isn’t enormous.”

On the capital side, the program is a good fit for individual investors who are “sensitive to taxes,” according to Fundrise CEO Ben Miller. This past summer, Fundrise announced the launch of its own Opportunity Fund, which aims to raise $500 million by the end of 2019. Consistent with the crowdfunding model that Fundrise has utilized to great success, investors can pitch in for a minimum contribution of $25,000, with the vehicle targeting real estate opportunities nationally (the fund has already acquired two properties, according to Miller: a mixed-use multifamily building in Washington, D.C., and an office building in Los Angeles).

Like others who have launched funds targeting Opportunity Zone investments in recent months, Miller noted that the vehicle is not necessarily ideal for traditional real estate investors, but rather “upwardly mobile” and “fairly liquid” individual investors with a long-term view. He added that the firm’s technology-centric approach is ideal for adhering to some of the program’s more challenging guidelines, such as capital deployment requirements that other firms may have difficulty complying with.

“The logistical complexity is in raising the money, transacting the funds for investors within 180 days of their gain, deploying it into the right real estate and having to be more than 90 percent deployed in Opportunity Zone real estate,” Miller said. “That logistical challenge of how you raise the money and how you deploy it is much more complicated for a fund. You usually spend 18 months raising a fund and draw those commitments down—that’s not how this works.”

With Opportunity Funds having to “raise the funds in real time and deploy in real time,” Miller said Fundrise’s platform is well equipped to meet the demands of the program. “Without software, I think the ordinary funds are going to struggle on this,” he said. “We already have tens of thousands of investors deploying in real time. How are you going to manage that without technology?”

Despite the challenges, real estate investment firms across the spectrum of the industry are seeking to tap into the potential provided by the Opportunity Zones program. In August, Bloomberg reported that the Scott Rechler-led RXR Realty is launching a $500 million Opportunity Fund of its own.

Michael Maturo, RXR’s president and CFO, noted that the firm views the program as “a big opportunity” given that it is already heavily invested in Opportunity Zones in New York areas like New Rochelle and Yonkers, in Westchester County, as well as Brooklyn and Stamford, Conn. Many of those investments have been made through RXR’s Emerging Sub-market Venture fund, which has sought to develop in “transit-oriented downtowns that are looking to reinvent and repurpose themselves,” he said.

“We have been doing this for some time and have a pipeline of well over a billion dollars of projects in these areas,” said Maturo. “It makes a lot of sense for us to explore opportunities to take advantage of this tax program.” He added that RXR’s Opportunity Fund will mostly be focused on development opportunities in the tri-state area, with the company also targeting investment from high-net-worth individuals.

Maturo, like others interviewed for this story, cited the $6 trillion in unrealized capital gains that are “sitting on the sidelines” and eligible for potentially tax-free investment through the Opportunity Zones program—and given the sheer depth of that untapped liquidity, it’s easy to see why real estate market observers and participants are excited about the program’s potential.

Alvin Schein, a partner at real estate law firm Seiden & Schein, described it as a supercharged version of the 1031 exchange program, which allows real estate investors to roll over their proceeds from a property sale into a new acquisition without having to pay a gains tax—except in a 1031, “you never step-up your basis” and “you can never cash out” without eventually paying that gains tax.

“It’s so wide-ranging—it’s not like tax credits that are limited to a particular function, such as low-income housing tax credits. This is for any kind of commercial investment,” Schein said. “The reason many real estate people love 1031s is that they can put off the day of reckoning for their [gains] tax. This is a way of exempting the day of reckoning, and it’s much broader.”

Others still have questions and are awaiting the Treasury Department’s updated rules on the program for clarification. Paul Gevertzman, a tax partner at public accounting firm Anchin, Block & Anchin, noted that it remains to be seen whether the five-year and seven-year incentives will still be applicable beyond 2026 should an investment be made after 2021 and 2019, respectively—conditions that may mean the program “could have not a very long shelf life.”

“The tax benefits here are off the charts,” Millett said. “When tax reform passed [in 2017], nobody really knew that this was in here. It wasn’t until a couple of months later when people started saying, ‘What?’ ”