Only one in seven chains tracked by Center for an Urban Future have grown their presence in 2017, the smallest share in a decade 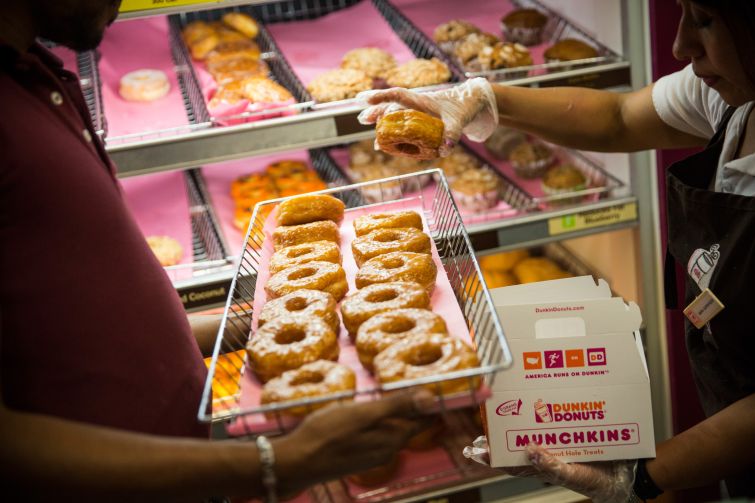 Though national retail chains continued to strengthen their presence in New York City this year, most of that growth came from food and mobile phone stores like Dunkin’ Donuts and MetroPCS while apparel and electronics retailers continued to experience “significant contractions,” according to the Center for an Urban Future’s (CUF) annual “State of the Chains” report released today.

The 296 chain retailers tracked by the report grew their footprint to a total of 7,317 stores across the city in 2017, up nearly 2 percent from 7,223 stores last year. While that constitutes the ninth consecutive year of a net increase in the number of national chains in New York City, the CUF noted that the growth has been “limited to a relatively small number of retailers”—with more chains than ever feeling the market headwinds that have battered the brick-and-mortar retail sector this year.

Coffee-and-donut behemoth Dunkin’ Donuts continues to dominate the CUF’s ranking of national retailers with a presence in New York, topping the list for a ninth consecutive year and growing its footprint to 612 locations in the city from 596 stores last year. Prepaid wireless provider MetroPCS, fueled by its 2013 merger with T-Mobile, leaped Subway to become the city’s second-largest chain retailer with 445 stores across the five boroughs—an increase of 119 locations from 2016.

But while those companies joined the likes of Crumbs Bake Shop—which has reestablished itself at 22 locations after experiencing financial troubles that forced major closures in 2014—and Pret a Manger among chains that have expanded in New York in 2017, the CUF found more worrying trends across the industry at large. One-fifth of the city’s national retailers have closed stores in the past year (compared with one-seventh in 2016), while only one in seven chains tracked by the CUF actually grew their presence in 2017—the smallest share since the public policy think tank launched the “State of the Chains” report a decade ago

“Every single year we’ve done this [report], the number of chains stores in New York City has gone up, but I think this year we’re starting to see some new challenges,” Jonathan Bowles, the CUF’s executive director, told Commercial Observer.

Bowles noted that while Dunkin’ Donuts and MetroPCS together accounted for 135 new stores across the city in the past year, the other 294 national chains tracked by the report experienced a combined net loss of 41 retail locations across the five boroughs in 2017—statistics that depict “much more of a mixed picture for national retail in New York than has been in the past.”

Food-related chains have thrived over the last decade, alone responsible for more than 40 percent of the growth in national retailer locations in the city over the past 10 years, according to the CUF. The number of coffee chains like Dunkin’ Donuts and Starbucks have grown by 65 percent over the past decade, while fast-casual dining chains like Pret a Manger and Chipotle have more than doubled their presence in that time and fast-food restaurants like McDonald’s have grown 14 percent.

But the news has not been so good for retailers that “compete most directly with online outlets,” the report said, such as those in apparel, footwear, office supplies and electronics. Electronics retailers, in particular, have experienced the biggest drop of any national retailer category—with factors like RadioShack’s bankruptcy meaning there are now fewer than half as many electronics chain locations in New York than there were in 2008 (53 stores today, compared to 144 in 2008).

That dynamic hasn’t extended to mobile phone service chains like MetroPCS and T-Mobile, which in 2017 have surpassed clothing stores as the second-largest national retail chain category in the city, behind fast-food restaurants. Cell phone chains “have dominated the consumer electronics market in the decade since the iPhone was first released” in 2007, the CUF said, having grown to 854 stores across New York City from 233 locations in 2008.

Drugstore chains like CVS, Rite Aid, Walgreens and Duane Reade have struggled in comparison to recent years, losing a combined 53 locations across the city. Chain pharmacies now have a total of 558 locations across the city, up only 1 percent from their number in 2008, the CUF said—attributing the contraction in part to Duane Reade and Walgreens consolidating their locations since merging in 2010, as well as their closing of 600 stores nationwide ahead of a $4.38 billion acquisition of a portfolio of stores from Rite Aid.

Referring to the lukewarm environment for national chain retailers in New York City at large, Bowles cited “the combination of some of the highest rents in America and declining sales because of online competition.”

“A lot of retailers’ profit margins were already slim, and then you add in losses because of online shopping, and it’s not a surprise that a lot of these merchandise retailers are cutting back,” he said—adding that food establishments like Dunkin’ Donuts and Chipotle “aren’t facing that kind of online competition.”

While Manhattan continues to dominate the market among national retail chains with 2,734 locations, Brooklyn has seen the largest increase among New York City boroughs in the number of new chain locations in 2017—adding 47 new stores for a total of 1,587 locations, a 3.1 percent increase from last year.