Be It Duane Reade, CVS/pharmacy or Rite Aid, NYC Is Overrun With Drug Stores 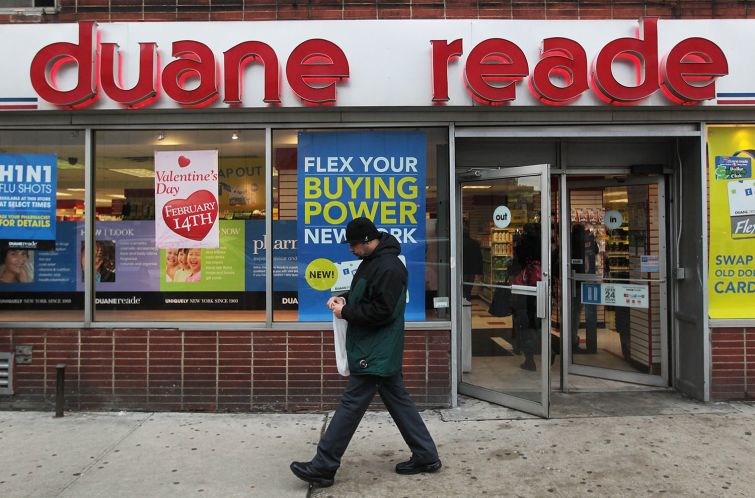 Duane Reade, Rite Aid and CVS/pharmacy are all over the city (Photo by Chris Hondros/Getty Images). tcullen2015

It is a familiar sight to anybody who has spent any time in this city: the ubiquitous drug store chain. This is the one business that seems immune to rent hikes or gentrification. The drug store shines in poor areas as well as rich ones. And it doesn’t seem to matter that the nearest competition is two or three blocks away. It doesn’t even seem to matter to a Duane Reade that the nearest competition is another Duane Reade.

“The two sides of Broadway trade differently,” a broker who has done deals with the big pharmacy chains explained.

Another broker in the know pointed out that you can find a Duane Reade across the street from Walgreens in Union Square, because they have different customers—even if both sets are convenience-driven. Another retail specialist noted that perhaps one drug store chain could set up shop nearby a competitor, thinking the latter is underserved or its lease is coming due.

Part of the reason why these drug stores have been so successful is that they have been intelligent about their real estate decisions.

Attorney Gary Rosenberg from Rosenberg & Estis, whose firm has represented landlords with drug store tenants, added: “I think in Midtown where rents are so high, tenants still prefer just enough ground floor to cover their walk-ins and either below-grade or second-floor space to average down their rent.”

Duane Reade became a dominant force in the New York City market pre-Walgreens acquisition due to its strategy of snapping up mom-and-pop pharmacies as well as tons of leases to box the competition out. The New York-born Duane Reade didn’t even open up stores in all of the locations it leased—the drug store subleased out some of the space it gobbled up.

To a large extent, Duane Reade had to be savvy given how much was stacked in favor of its competitors.

“If you’re a Duane Reade, if you compete against others, you don’t have the buying power,” said retired pharmacist Harry Sgantzos, who worked at a West Midtown Duane Reade for seven years until last year.  “[The competition’s] buying costs are lower. They have centralized warehouses feeding multiple states.”

Duane Reade has been successful because it figured out how to use New York’s fractious, scatterbrained floor plates to its advantage.

Signage is obviously important, which one can get from a minimal amount of ground-floor space—and once the signage is taken care of they can be flexible about everything else. “The way they’ve set it up [is]…they’re focused on minimal ground floor, but looking for cheapest ground-floor space,” Mr. Rosenberg said.

One of the brokers with knowledge of the drug store market said: “Duane Reade is an urban model, so they can be the most nimble [with the multi-level stores].” The others all come from suburban markets, he added, so they are less willing to compromise on size.

Rite Aid, for one, is not shrinking its floor plates or getting rid of pharmacists. But the stores are “adding more front-end, or convenience store, products,” the same broker said.

CVS doesn’t seem to be shifting its real estate strategy. “It seems like CVS is focused on larger stores,” said a source. “I don’t understand the reasoning behind it.”

Indeed, the New York drug store has made itself as much a one-stop shop, as it is a pharmacy, which is often a little cubby in the back.

“I think the pharmacy category has evolved so that now people depend on them for everything from prescription drugs to breakfast cereal,” said Peter Braus, a managing principal of Lee & Associates NYC. “They’re basically what the neighborhood bodega used to be a decade ago.”

Joanne Podell, vice chairman of retail services at Cushman & Wakefield, noted: “I liken them to five-and dimes with their home goods, etc.”

However, this comes at an interesting time; drug stores have been in a frenzy of mergers, which has been the industry response to pricing challenges, competition from supermarkets, club stores and other merchants, like Walmart and Amazon.com; as well as the national health care reform law, which has reduced the high margins for drugs.

As was widely reported in early November, Walgreens Boots Alliance is acquiring Rite Aid for $17.2 billion, whittling down the number of big drug store players in the country to two. The acquisition “complements Walgreens’ footprint, filling gaps in the Northeast and Southern California so [Walgreens] will cover the entire U.S.,” Walgreens said in its investor materials.

Between Walgreens’ 8,200 stores and Rite Aid’s 4,600 locations, the conglomerate will have 12,800 stores nationwide. Together they will own half or more of the drugstore market share in the 14 largest major U.S. cities, Business Insider reported. CVS, meanwhile, has 7,800 stores.

In Manhattan alone, Duane Reade, owned by Walgreens since 2010, is the dominant force with 91 stores. According to a Manhattan drug store market map from November created by The Shopping Center Group, the rest of the stores break down in the borough as follows: Walgreens (12), Rite Aid (29) and CVS (44).

A retail broker with familiarity with the drug store business in New York City said that prescriptions used to drive the business, and the front-of-the-store goods were secondary. “Now it’s the opposite,” he said, because of the Affordable Care Act, or Obamacare. “All these stores have to have much higher margins and need to be more efficient from a sales perspective,” he added.

Due to Obamacare, more people are using insurers to pay for their prescriptions, and private insurance companies reimburse at a price less than full retail. Walmart said in an August media call that part of its reduced profit outlook was due to the Affordable Care Act, Quartz reported.

At Duane Reade, the merger of its parent company Walgreens with Alliance Boots in December 2014 has resulted in the New York-centric brand bringing in better quality products to the front of the shop, brokers said. One source speculates that Duane Reade may even abandon pharmacies in some of its stores where there is a full-service Duane Reade within a couple of blocks. (The Duane Reade at 184 West 23rd Street in the Flatiron District that doesn’t have a pharmacy is a case in point.)

As a result of the Walgreens-Rite Aid deal, slated to close in the second half of next year, redundant stores are likely to be eliminated “but now Rite Aid will have capital to expand and relocate stores that are doing well,” one broker in the know said.

‘The pharmacy category has evolved so that now people depend on them for everything from prescription drugs to breakfast cereal. They’re basically what the neighborhood bodega used to be a decade ago.’—Peter Braus of Lee & Associates NYC

Meanwhile, Walgreens announced earlier this year that it plans to shutter 200 U.S. stores to cut costs.

A spokeswoman for CVS said via email: “We continue to look for opportunities to open stores in the New York City market. Over the past few years, we’ve reset many of our New York City stores to better serve our customers there. We’ve found that many of our customers there use CVS/pharmacy more like a general store due to a lack of convenient alternatives. As a result, we now offer more healthy food options, grab-and-go products, etc., to serve those customers. The recent announcement made by our drugstore competitors does not change our strategy in New York City.”

Mr. Pruger said the company has “an appetite for opening more stores” and those have been consistently the same size for the last eight years.

“With the density of 52 million tourists, 15 million people coming into Manhattan and 2 million residents, there’s a need,” Mr. Pruger said of the quotidian nature of drug stores in the city.

With so many of these drugstores per square block in New York City, how are these stores differentiating themselves?

On price for one thing, Ms. Podell said. “It’s good for the consumer,” she said. “It gives them a choice.”

Jeffrey Roseman, an executive managing director at NGKF, said that he thinks drug store proliferation may have slowed down a bit. As for the future, he said: “Some will start going into a smaller, more express model, rather than the previously standard 10,000- to 15,000-square-foot stores.” Others, Mr. Rosenberg said, could start “carving out space for a doctor’s office” and providing more and more services like a doctor on call.

Rite Aid didn’t respond to a request for comment and its New York metro area broker, Chase Welles of SCG Retail, declined to comment. Mike Riley of SRS Real Estate Partners, who represents Walgreens and its subsidiary Duane Reade, declined to comment, as did Walgreens’ former broker, Patrick Smith of JLL (who was at SRS when he represented the national pharmacy chain).