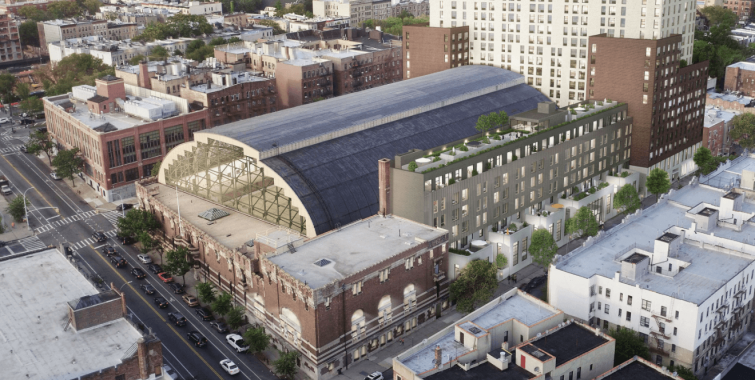 The City Planning Commission voted 11 to 1 this afternoon to approve the contentious plan to redevelop the Bedford Union Armory in Crown Heights into a mix of condominiums, rentals and a recreation center.

Protesters from New York Communities for Change and a handful of other local grassroots groups reportedly tried to flood the commission’s hearing room but were turned away by security staff. City Council candidate Jabari Brisport, who is running on the Green Party line against incumbent Laurie Cumbo for the council seat that represents Crown Heights, and Crown Heights tenant union member Joel Feingold were arrested and hauled away from the hearing in handcuffs, according to NYCC organizers.

Commissioner Michelle de La Uz was the lone dissenting vote against the armory plan, which has inspired protests and charges of gentrification since entering the Uniform Land Use Review Process (ULURP) in March.

Developer BFC Partners plans to build a 13-story residential building next to the armory, develop condos in place of its former stables, and convert the property’s soaring drill hall into a public recreation center. The current plans call for 330 rentals, half of which will rent for below-market rates. But, as housing activist groups have pointed out, only 20 percent of the units will be affordable to the average Crown Heights family. The median household income in the neighborhood is $41,745, according to 2014 census data. The ownership portion of the project will include 60 condos, 12 of which will be priced for middle-income families.

The City Planning Commission vote is just one step in the eight-month-long public review and rezoning process for the armory. The City Council still has to vote on the project by the end of the year.

BFC continues to defend the project, which it contends includes the maximum amount of affordable housing possible without city subsidies. “We’re committed to providing a new affordable recreation center, affordable office space for non-profits and affordable housing for the Crown Heights community,” BFC spokesman Sam Spokony said in a statement. “As the Bedford-Union Armory continues to sit vacant, this is an opportunity to make it a place that truly serves local families.”

The neighborhood’s community board and Brooklyn Borough President Eric Adams officially disapproved the project as part of ULURP earlier this year. Local City Councilmember Laurie Cumbo also came out against BFC’s plan for the armory, and has said that she plans to vote against it if it comes before the City Council in its current form.

The New York City Economic Development Corporation, which has spearheaded the armory’s redevelopment, released the following statement after the vote:

“As we move to transform the historic Bedford Union Armory into a world-class recreation center and much-needed housing, we will continue to work with Council Member Cumbo and other stakeholders to ensure this project serves the Crown Heights community,” said Anthony Hogrebe, an EDC spokesman.