The $1.2B refi will occur at the time of closing, and the loan will be securitized in the CMBS market 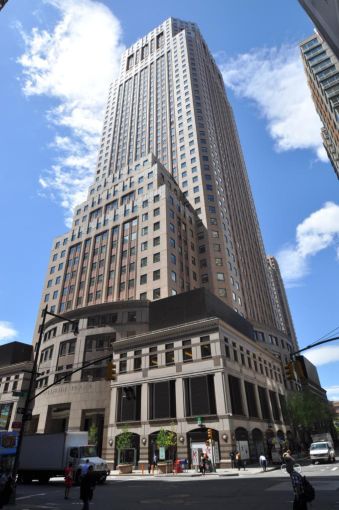 RXR Realty and SL Green Realty Corp. have entered into an agreement to purchase a 48.7 percent stake in Midtown West’s Worldwide Plaza from New York REIT with an agreed-upon property value of $1.7 billion, sources familiar with the transaction told Commercial Observer.

New York REIT will maintain a 50.1 percent equity interest, and George Comfort and Sons will continue to own the remaining 1.2 percent that it currently owns, sources said.

The deal on the trophy asset is expected to close on or before Nov. 1 and a $1.2 billion debt refinancing will occur concurrently with the closing. The 10-year, interest-only loan with have a “sub four percent” rate and will be securitized, said Wendy Silverstein, New York REIT’s chief executive officer, on an investor call this morning.

New York REIT will receive $346.2 million in cash, net of $116.5 million of defeasance cost, and a $90.7 million capital reserve to cover future capital and leasing costs at the property, according to an announcement from the REIT.

Harry Macklowe owned Worldwide Plaza before defaulting on his loan and handing the asset over to lender Deutsche Bank in 2007, The Wall Street Journal reported at the time. The bank sold it two years later to George Comfort & Sons and RCG Longview for the bargain price of $600 million.

In November 2013, New York REIT—then known as American Realty Capital New York Recovery—bought a 48.9 percent stake in the property for $220 million. The deal faced backlash from RXR at the time, which filed a lawsuit against the REIT for $200 million—alleging that RXR was promised the stake in the tower.

New York REIT marketed its almost-49 percent-stake in Worldwide Plaza in January, before choosing to exercise its equity option to buy an additional 49.9 percent stake in the property in June for $277 million—thereby bringing its equity interest up to 98.8 percent—based on the option price of $1.4 billion less $875 million of debt on the property.

The Real Deal first reported that the RXR-SL Green partnership was a front-runner to purchase the trophy asset.

“With convenient access to transit, a slate of top-tier tenants, and a historic reputation, the iconic Worldwide Plaza building is poised for a big future. We look forward to working with NYRT and SL Green to further enhance Worldwide Plaza’s position as a commercial destination in Midtown West,” Scott Rechler, the chairman and chief executive officer of RXR Realty said, in prepared remarks.

“The acquisition of Worldwide Plaza allows us to expand our footprint on Manhattan’s west side through investing in a Class A asset that is fully leased to institutional tenants,” David Schonbraun, SL Green’s co-chief investment officer, added. “We are excited to partner with NYRT and RXR in our efforts to drive value at the property and participate in the growth of this neighborhood.”

Both RXR and SL Green have been actively closing deals on trophy properties recently.

In July, RXR closed a $850 million refi for 237 Park Avenue. As previously reported by CO, a $477.8 million portion of the $693.2 million whole loan on the property—co-originated by Morgan Stanley (65 percent) and Société Générale (35 percent) was securitized by the lenders in the MSSG 2017-237P single-asset, single borrower commercial mortgage-backed securities deal. (A further $87.8 million in mezzanine debt is also in place on the property, with up to $69 million in future subordinate mezzanine financing permitted, bringing the total debt on the building to $850 million.)

Updated: This story was updated to include comments from RXR and SL Green, the proceeds received by New York REIT at closing and details regarding the debt refinancing.