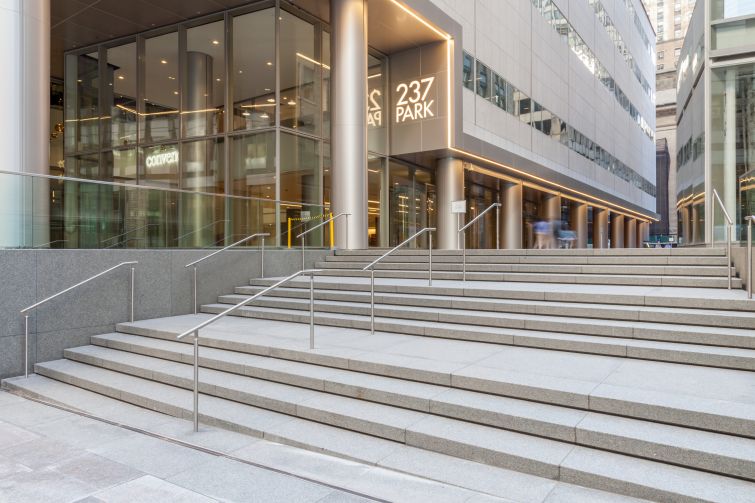 The loan on RXR Realty and Walton Street Capital’s 237 Park Avenue has been securitized in the Morgan Stanley/ Société Générale-sponsored MSSG 2017-237P single-asset single-borrower CMBS transaction, according to a presale report from Kroll Bond Rating Agency.

The deal is secured by a $477.8 million portion of the $693.2 million whole loan on the property—comprising a $598.2 million non-recourse first mortgage and a $95 million building loan—that was co-originated by Morgan Stanley (65 percent) and Société Générale (35 percent) on July 26.  A further $87.8 million in mezzanine debt is also in place on the property, with up to $69 million in future subordinate mezzanine financing permitted, bringing the total debt on the building to $850 million. The Real Deal first reported the lenders’ identities on the refi.

Loan proceeds were were used to refinance $628.2 million of existing first mortgage debt and mezzanine debt on the building, and also fund outstanding tenant improvements and leasing commissions. Approximately $23.4 million of equity was returned to the borrowers.

The MSSG 2017-237P trust collateral consists of four pari passu A notes totaling $132.6 million and four B notes totaling $345.2 million—an aggregate balance of $477.8 million. The remaining $215.4 million portion of the whole loan will be securitized in future CMBS deals, according to the KBRA report.

The loan is secured by the borrowers’ fee simple interest in 237 Park Avenue—a 1.3 million-square-foot, 21-story, Class A office building located on the west side of Lexington Avenue between East 45th and East 46th Streets, as well as its leasehold interest in the condominium units it owns.

The property, which includes 1,893 square feet of retail space, was constructed in 1914 and underwent a $62 million redevelopment in June.

In February, Scott Rechler, the chief executive officer and chairman at RXR Realty, told Commercial Observer that—with its redevelopment fully underway at the time—237 Park Avenue was fully leased and ripe for refinancing.

“The key is that a lot of the properties are an older vintage, so they were built in the 20th Century and not well prepared for the needs of a 21st Century tenant,” Rechler said at the time of interview.  “And so what we’ve done at 237 Park Avenue, 75 Rockefeller Plaza and 230 Park Avenue is take these older buildings and upgrade them.”

The building was 95.6 percent leased as of June, according to the KBRA report, with the two largest tenants accounting for more than half of the building’s total square footage (58.6 percent) and base rent (60.9 percent). New York and Presbyterian Hospital leases 479,016 square feet through November 2048 and J.P. Morgan Chase leases 254,585 square feet through July 2020.

Officials at RXR declined to comment. Officials at Walton Street Capital did not immediately respond to a request for comment.