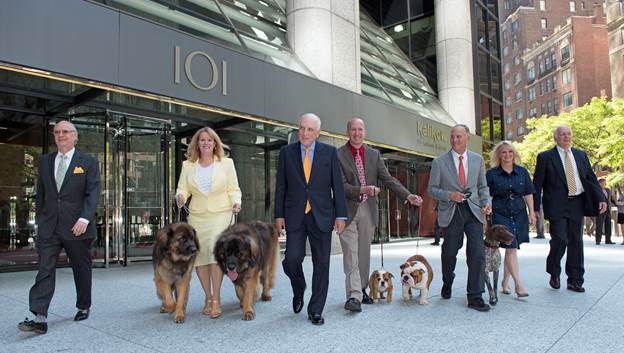 The American Kennel Club has agreed to take 60,000 square feet of space at 101 Park Avenue in Midtown to house the organization’s headquarters and its Museum of the Dog, the purebred dog registry announced Wednesday.

The direct deal will see the AKC take the entire fifth floor and parts of the adjoining lobby-level and third floors at landlord H.J. Kalikow & Co.’s 49-story, 1.3-million-square-foot office tower between East 40th and East 41st Streets. The organization’s headquarters will occupy the roughly 43,000-square-foot fifth floor, while the museum will be housed in the lobby and third-floor space.

The AKC said it will move into its new headquarters in “early fall 2018,” while the Museum of the Dog—which is currently located in St. Louis and “houses one of the largest collections of dog art in the world,” according to the Candy Caciolo, president of the museum’s board—is slated to begin occupying its space early 2019. Real Estate Weekly first reported the news of the deal. The asking rent and length of lease were not disclosed.

The AKC’s current headquarters are located nearby at the Sapir Organization’s 260 Madison Avenue. The organization announced its intention to move the museum from St. Louis to New York City earlier this year.

“We are very excited to move both our headquarters and the museum into [101 Park Avenue],” Ron Menaker, chairman of the AKC, said in the release, adding that the move “is reflective of our growth and expansion as organizations.” Dennis Sprung, the non-profit’s president and chief executive officer, said the new headquarters “supports the needs of our growing staff.”

Peter Kalikow, president of H.J. Kalikow, said the landlord is “extremely proud that the AKC has chosen 101 Park Avenue as the site for its world headquarters as well as the Museum of the Dog.”

The AKC was represented in the deal by Stephen Siegel and Chris Corrinet of CBRE, Glenn Isaacson of Cushman & Wakefield and Rich Speciale of AEQUITAS LLC. Landlord representation was not disclosed but C&W’s John Cefaly and Gus Field handle leasing at the property, according to 101 Park Avenue’s website.

A spokeswoman for CBRE declined to comment on the matter, while a spokesman for C&W did not immediately provide comment. Representatives for AEQUITAS could not be reached.