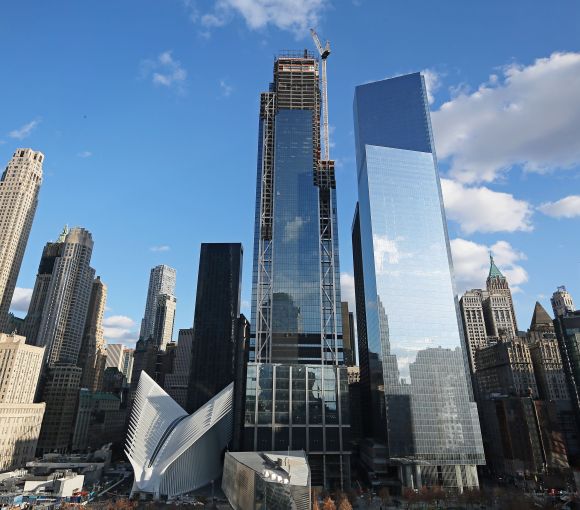 Looks like 4 World Trade Center is the new hot spot(ify).

Spotify has opted to move its headquarters to Silverstein Properties’ 4 World Trade Center, ending months of speculation on where it would relocate.

The music streaming service will occupy 378,000 square feet at the top of the four-year-old, 72-story tower, Gov. Andrew Cuomo announced at a press conference this afternoon. As part of the deal with the State of New York, Spotify will get an $11 million rent reduction over the course of the company’s 15-year lease, according to Empire State Development Corporation President Howard Zemsky. A source familiar with the property said the asking rent was $85 per square foot.

Cuomo announced that the agreement keeps more than 800 Spotify jobs in New York, and the company has committed to adding 1,000 new jobs. Spotify will move to 4 WTC next year, according to the governor’s office.

“We are proud to be a New York company,” Horacio Gutierrez, Spotify’s general counsel of U.S. operations, said at the press conference. “We are thrilled to be moving to Lower Manhattan and specifically 4 World Trade Center. ”

Currently, Spotify is based at 620 Avenue of the Americas in Chelsea, which Gutierrez said was a great area but limited the opportunity to expand.

“The space just wasn’t there,” he said. “There wasn’t the opportunity to grow.”

Since last fall, rumors swirled as to whether Spotify would choose 4 WTC or 1 World Trade Center, which is owned by Durst Organization and the Port Authority of New York & New Jersey. The deal with Spotify also means that the entirety of 4 WTC is officially leased.

“Today is a great day for the World Trade Center and Downtown,” Larry Silverstein, the chairman of Silverstein Properties, said in prepared remarks. “This major commitment by a pioneer of the digital economy is further proof that Lower Manhattan has become the top destination for New York’s most innovative companies. No other neighborhood can beat our mix of mass transit connections, apartments, restaurants, shops and culture.”

The Swedish company had been eyeing both of the World Trade Center towers since last fall, as was widely reported. Spotify had been looking to expand beyond the 140,000 square feet it currently leases at RXR Realty’s 620 Avenue of the Americas between West 18th and West 19th Streets, as The New York Post reported in November 2016.

Haskell said the company ultimately opted for 4 WTC because “there’s a variety of things” that the building offered. Among them, he said, was “The floor plates at 4 World Trade Center worked extremely well. There was a conscious decision on Silverstein’s part to create floorplates for all types of tenants.”

Spotify’s deal is the largest that Silverstein has signed with a private corporation at the skyscraper. The Port Authority, which owns the ground at the World Trade Center, and the City of New York anchor the lower half of the 2.3-million-square-foot tower. In recent years, Silverstein has signed a mix of media and finance companies to the building as well, including New York Mets broadcaster SNY, food-focused public relations firm PadillaCRT and finance firm Hudson River Trading.

“Today’s Spotify announcement is music to our ears. It ups the cool factor in Lower Manhattan and boosts the neighborhood’s cultural cred,” Jessica Lappin, the president of the Alliance for Downtown New York, said in a statement. “It’s also big news as it means leasing at 4 WTC is now complete.”