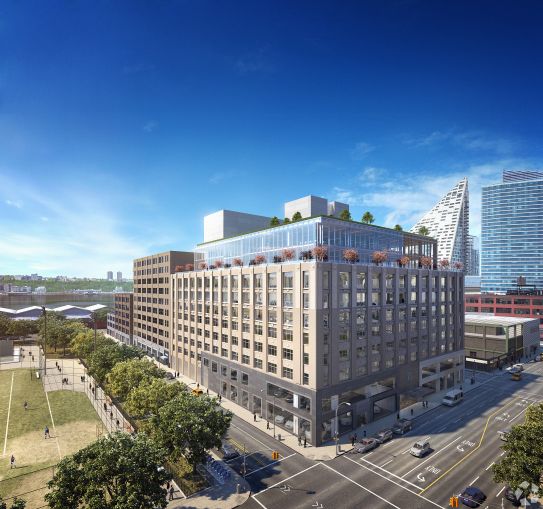 Activist investor Bill Ackman’s hedge fund and charity have successfully taken over a chunk of 787 11th Avenue—a long-awaited deal that moves the entities to the Far West Side from Midtown.

The companies signed a 15-year lease, according to a press release from landlord The Georgetown Company, which co-owns the building with a wealth fund connected to Ackman. The hedge fund, Pershing Square Capital Management, and the philanthropic group, The Pershing Square Foundation, will occupy 67,000 square feet of the eight-story building. Asking rent in the transaction was not available.

The companies will be located on the newly built ninth and 10th floors of the property, according to a source familiar with the deal.

The entities are slated to move into the 423,392-square-foot property near the end of 2017, according to the release. Both are currently based at Vornado Realty Trust’s 888 Seventh Avenue between West 56th and West 57th Streets (it wasn’t clear how many square feet they each occupy at the building).

Mary Ann Tighe and Evan Haskell of CBRE represent the landlord at the buildings. No other brokers were involved in the transaction.

“This is a neighborhood that will continue to grow and we’re pleased to welcome Pershing Square to the building,” Georgetown’s Adam Flatto said in prepared remarks.

Closing of the lease comes as the landlords have finished a refinancing on the property between West 54th and West 55th Streets, formerly occupied by the Ford Motor Company. Blackstone Real Estate Debt Strategies provided a $349.5 million construction loan for repositioning work at the 87-year-old property, replacing $200 million in original debt. CBRE’s Shawn Rosenthal and Jason Gaccione worked with Ackman-Ziff Real Estate Group‘s Russel Schildkraut to negotiate the financing on behalf of The Georgetown Company.

Pershing Square’s move to the building does not come fully as a surprise: Commercial Observer reported in May 2015 that Ackman planned to move his companies to the building, as well as add a rooftop tennis court. Since that time, the new owners have announced a $100 million overhaul of the property that includes a new exterior designed by Rafael Viñoly.

Flatto and a wealth fund controlled by the Ackman family closed on the $250 million purchase of 787 11th Avenue in July 2015, as CO reported at the time. The buyers took out a $200 million acquisition loan from J.P. Morgan Investment Management, according to the Georgetown release.

Since the purchase roughly a year and a half ago, the new landlords have secured a mega deal with BNF Automotive Group at the base of the building, which sits on the traditional Automobile Row. Jaguar and Land Rover have long had dealerships at the building, but in recent years were rumored to be on a month-to-month lease, sources told CO in May 2015. The new landlords signed a 25-year, 265,000-square-foot lease with BNF, the dealerships’ controlling entity, in December 2015 to keep the two brands there and add Nissan and Infiniti to the tenant roster.