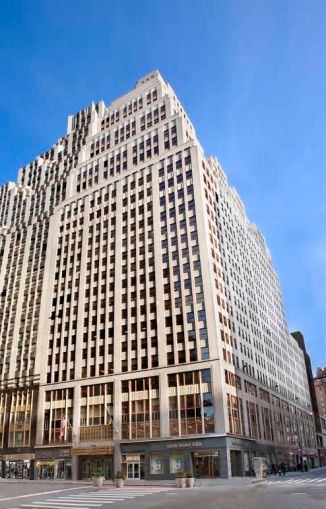 Communications agency Coyne PR is relocating its office to 1400 Broadway between West 38th and West 39th Streets, nearly doubling its current space a few blocks away.

The firm signed an 11-year lease for a 13,500-square-foot space, which spans the top two floors in the 37-story building, according to a press release by landlord Empire State Realty Trust. ESRT merged the two floors into a penthouse suite this February, as Commercial Observer previously reported.

Asking rent in the deal was $69 per square foot, according to an ESRT spokeswoman. Andrew Braver, Josh Kuriloff and David Sherman of Cushman & Wakefield represented the tenant, according to The New York Post, which first reported news of the deal. Scott Klau, Erik Harris and Neil Rubin of Newmark Grubb Knight Frank along with ESRT’s Keith Cody represented the landlord.

“[Coyne] is moving to a totally upgraded building in the vital Times Square South market, with its pedestrian plazas and easy access to Grand Central [Terminal], [Pennsylvania] Station, Port Authority Bus Terminal, and 15 subway lines,” said Thomas Durels, the executive vice president and director of leasing and operations for ESRT, in prepared remarks.

The new space comes with a private 1,000-square-foot terrace overlooking Bryant Park and Hudson River, per the release. Coyne, whose clients include the Walt Disney Company and Hard Rock International, will move next summer, the firm’s spokeswoman said.

“The space is creative, fun and one of the most of unique offices I have ever been in the city,” Chief Executive Officer Tom Coyne said via the spokeswoman. “We really wanted to find an office that would thrill our incredible New York City staff and I believe we hit a home run!”

ESRT bought the 1400 Broadway property in July 2014, and gave it an upgrade including a new lobby and new elevators. Other tenants include engineering consulting firm Hatch Mott MacDonald, Kohl’s and Men’s Warehouse, which renewed and expanded its lease to more than 26,600 square feet this April, as CO previously reported.