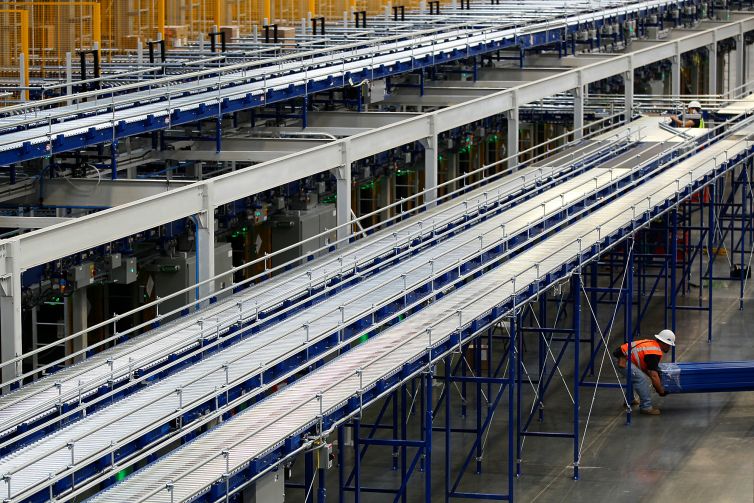 Workers construct a small section of a massive storage and conveyor system inside a warehouse leased to Skechers. Photo by Robert Gauthier/Los Angeles Times via Getty Images

Apparel brands are among the top retail firms that have sewn up a significant presence in Southern California’s Inland Empire, occupying gobs of warehouse space in the nation’s top industrial market.

Clothing companies led industrial leasing in the fourth quarter of 2022 with the top three deals, according to Savills’ report released Monday. Hanes renewed for 1.3 million square feet with Nuveen in Perris; Under Amour reupped for 1.2 million square feet with Prologis in Rialto; and Skechers signed a new 1 million-square-foot deal with Logistics Property Company in Banning.

Additionally, 2253 Apparel Inc. purchased the new development in Perris with $97.4 million in financing — before selling it again in December — and USAA Real Estate and McDonald Property Group are building a manufacturing and distribution facility with 1.8 million square feet in Beaumont for United Legwear & Apparel Company. (NFI Industries’ $220 million deal with Sares-Regis Group in the Inland Empire was the most expensive investment deal in Southern California in the fourth quarter.)

Average asking monthly rents in the Inland Empire have increased 68 percent from one year ago, according to Savills. However, the report explains that a slowdown in rent growth is likely coming due to larger economic challenges and rising operating expenses.

“Market conditions are the healthiest in the nation due to the demand for ecommerce fulfillment, last-mile supply chain space and proximity to the Los Angeles and Long Beach ports,” the report read. “Despite a record amount of space under construction, the continued ultra-low vacancy rate suggests there is not enough available inventory. … However, as the expectation of a recession looms, landlords, developers, tenants and lenders should closely monitor consumer spending as it relates to e-commerce fulfillment demand.”