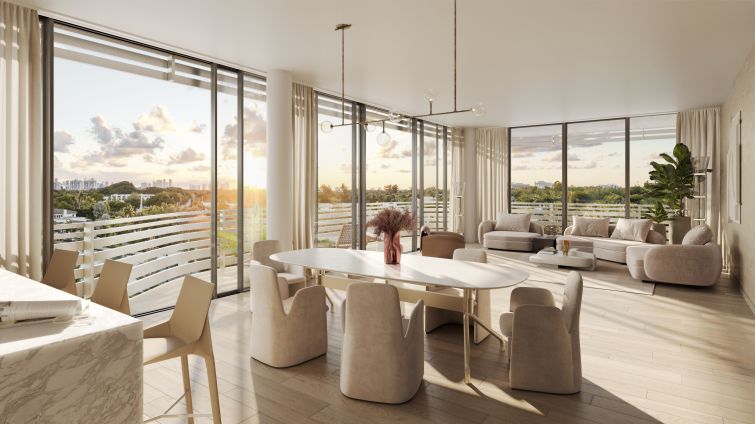 JMH Development, led by Jason Halpern, is switching up its plans (slightly) for a Miami Beach project that includes the restoration of an Art Deco building on the site.

In 2021, JMH was approved for a 22-unit luxury condo building at 2901 Indian Creek Drive in Mid-Beach facing Biscayne Bay, that would replace three existing two-story apartment buildings. While the broad outlines remain the same, JMH has released a new design that includes just 11 uber-luxury units, as well as a pool deck and tropical landscaping.

JMH will preserve one of the three walk-ups, which was built in 1936 on commission from Robert H. Morton, founder of the traveling Hamid Morton Circus. The vacant building was built in the Art Deco style of the period, but is currently inaccessible. It has been blocked from view since another of the apartment buildings was built in 1962.

The New York-based JMH will lift the building by several feet to comply with the current flood standards, as well as reorient it to face Indian Creek Drive. The Miami Beach Board of Preservation approved the project, which had been in the works since 2015. Halpern purchased the two lots that make up the site for $5.7 million n 2014, property records show.

At one time, JMH had a partner on the project, as evidenced by a second deed from 2017, but is now the sole owner of the property, the company confirmed.

The design, by Miami-Beach based Urban Robot, takes into consideration the Art Deco context, as well as leans into its bias toward innovation and sustainability. The building is located at the corner of 29th Street, not too far from the Faena Hotel.

The New York-born Halpern is active in New York, where his projects include the apartment complex The Astor LIC and 184 Kent Avenue, a Brooklyn warehouse redeveloped into luxury condos that was later sold to Kushner Companies, LIVWRK and Rockpoint Group.

An earlier Miami Beach project from JMG ended rather ungraciously. At 300 Collins Avenue in South of Fifth, the relationship between Halpern and his silent partner, Dhruv Piplani, turned fractious and Halpern was eventually ordered to turn over his share by a Miami-Dade County judge, The Real Deal reported at the time. Piplani was later sued by the condo association for allegedly shoddy interiors.