Lee Zeldin, the Republican hopeful for New York governor, has quietly gathered support and cash from a real estate industry once enamored of incumbent Kathy Hochul 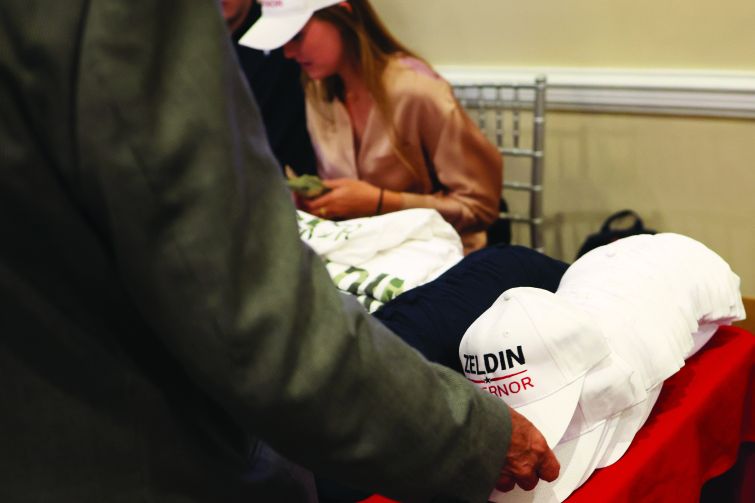 Kathy Hochul until about two weeks ago seemed like a lock for election to a full term as New York’s governor. As such, the commercial real estate industry was tripping over itself to line up behind her, checkbooks out.

Now, recent polls suggest that her Republican opponent, U.S. Rep. Lee Zeldin of Long Island, is gaining on her, though Hochul still seems likely to win — having outraised Zeldin’s paltry $16 million in campaign funds with her $46 million war chest. But a recent poll from Siena College saw Hochul’s lead over Zeldin shrink to 11 percentage points, down from 17 points in September. The opinion poll analysis website FiveThirtyEight puts her lead at even less, around 7.3 points.

Even if Zeldin remains unlikely to win in the heavily Democratic state, the tightening race might be pushing the rich (and the real estate interests) to split up their donations, said political consultant Hank Sheinkopf.

“This is not unique to the real estate industry — when something starts to get close, you’re going to see everybody pile in on both sides,” Sheinkopf said. “Why? To protect their interests.”

A few real estate bigwigs have certainly taken that advice to heart. Haim Chera, the son of the late Crown Acquisitions founder Stanley Chera and the head of retail at Vornado Realty Trust, donated to both Hochul and Zeldin, campaign finance records show. Chera gave $30,000 to Zeldin’s campaign in September and tossed a total of $69,000 to Hochul in three donations last year. Meanwhile, Moinian Group CEO Joseph Moinian has donated $52,000 to Hochul and $12,500 to Zeldin.

The elusive retail mogul Harry Adjmi handed out $22,000 to Hochul’s campaign and $45,000 to Zeldin in the past two years — shelling out his largest one-time donation, $35,000 for Zeldin, on Sept. 8, according to campaign finance records. Stephen Meringoff, a managing partner of Himmel + Meringoff Properties, donated $12,500 to Friends for Kathy Hochul in 2021 and $47,100 to Zeldin for New York in September. Howard Lorber, CEO of residential brokerage Douglas Elliman, among other titles, stuck with just Zeldin, ponying up $10,000 to the campaign in May.

Despite opening their wallets, real estate professionals were less willing to open their mouths about their political donations. Chera, Moinian, Adjmi and Lorber did not respond to requests for comment. In response to two emailed requests for comment, Meringoff sent a link to a Youtube clip of a Fox Business video entitled “Gov. Kathy Hochul roasted for telling Republicans to ‘get out of town.’ ” Meringoff declined to comment further in a subsequent email requesting an interview.

The real estate industry’s hesitancy to chat is not all that surprising. Zeldin, who represents New York’s first congressional district on eastern Long Island, has close ties to twice-impeached former President Donald Trump and was one of the 147 Republicans who voted to overturn the 2020 election results. His campaign platform focuses heavily on “law and order” with less of an emphasis on issues like health care, affordable housing and climate change, though both Hochul and Zeldin want more affordable housing in the state.

But Peter Kalikow, a real estate entrepreneur and the president of H.J. Kalikow & Company, who donated $74,529 to Zeldin directly or through a political action committee and $3,956.67 to Hochul in September 2021, was more open about his support. A spokesperson for Kalikow told Commercial Observer that Kalikow donated to Hochul to attend an event hosted by a friend of his wife.

“[Zeldin’s] policies are going to bring back what we used to have in terms of law, order and proper functions of government,” Kalikow said. “I think he’s hard-working and I think he’ll make a big difference.”

For Kalikow and the other real estate professionals who openly discussed giving their time or their money to Zeldin — among them Aurora Capital Associates President Jared Epstein and Red Apple Group Executive Vice President and Chief Investment Officer John Catsimatidis Jr. — crime was the No. 1 issue. Zeldin’s connections to Trump seemed a thing of the past.

“Crime, safety, the police and the budget are huge things,” said Epstein, who helped host a fundraiser for Zeldin in October. “I think we need someone that’s more conservative and will do a lot more with less because I think that’s going to be required due to the fact that more than 300,000 residents of New York City left [during the pandemic] so there is going to be less tax revenue.”

In an email to CO, Epstein wrote that he was so concerned about violence that he and his wife were considering relocating their family away from Manhattan if crime doesn’t drop.

Crime in New York City has been a hot topic since last year, when then-Gov. Andrew Cuomo declared gun violence a disaster emergency in July — though murders and shootings were down that month compared to the same period in 2020, CO reported. Violence in the Big Apple is still nowhere near the levels the city saw from the 1970s into the 1990s, and the 15.2 percent overall increase in crime in September compared to the same month in 2021 was mostly due to an increase in burglary, grand larceny and robberies, according to New York City Police Department statistics. The number of murders actually declined 23.5 percent year-over-year.

But an uptick in any type of crime is no incumbent’s friend, and the perception of more crime, coupled with heavy media coverage, have helped spur the anxieties of New Yorkers — Catsimatidis Jr. among them.

“I want my family and my customers and my employees to feel safe when they’re walking down the street,” said Catsimatidis Jr., who donated $25,000 to Zeldin’s campaign. “We have retail operations, and we see firsthand what’s been happening, and it’s really terrifying.”

Catsimatidis Jr. said he’s donated only to Zeldin, though he doesn’t fault anyone for playing both sides. His father, known for founding the Gristedes grocery chain and the current CEO of Red Apple, gave $55,000 to the Hochul campaign and $20,000 to Zeldin, and thousands more to Republican political action committees in the last two years.

Zeldin has a chance to weaponize those concerns and turn them into votes. Focusing on crime is a good strategy, especially when it comes to getting crucial New York City voters to come out for him, said Sheinkopf.

“It is a very smart strategy,” Sheinkopf said. “When voters go into a voting booth, they list in their minds a set of issues that they’re thinking about [and] they’ll make a decision based on what’s most important. Focusing on crime makes everything else unimportant. It’s no longer a question about his loyalty to Donald Trump, the allegation that he was a 2020 election denier, that he supported Trump through the insurrection, that he’s anti-choice, that he remains anti-choice but said he will follow the law of New York state — all that may, in fact, wane in comparison to crime. So he’s picked the issue that tends to move the most voters at the most rapid speed.”

Plus, real estate professionals have a vested interest in New York City’s long-term stability, given their investments — something not aided by crime concerns, Sheinkopf added.

No one in that laundry list of donors contributed to Zeldin, at least under their own names, according to campaign finance records.

Despite her strong (and loyal) financial supporters, Hochul’s loss of a double-digit lead over Zeldin is significant in New York, said Susan Del Percio, a Republican political strategist.

“New York should be a 20-point race. She should be beating him 60 [to] 40 at least,” Del Percio said. “Whether you think it’s a four-point race or a nine-point race, the fact that it’s [not] double digits is very significant.”

And, win or lose, Zeldin will walk away from the race with some powerful (if not always outspoken) friends.

“There’s nothing wrong with doing what corporations have done historically, which is to play both sides with hope for one outcome,” Sheinkopf said. “Having friends is what makes things work. And campaign donations create relationships. It’s just that simple.”