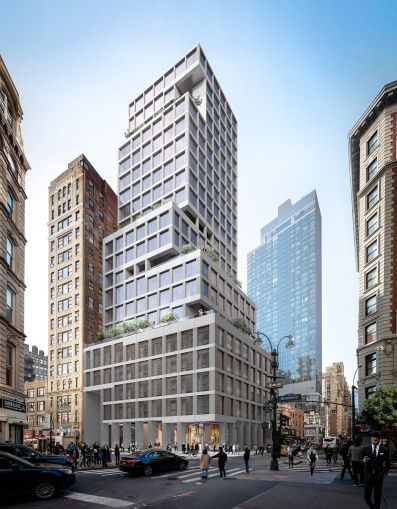 A rendering of the under-construction office tower at 1245 Broadway, which will rise 23 stories. Rendering: SOM

GumGum, which specializes in using artificial intelligence for targeted advertising online, inked a five-year, 6,500-square-foot lease for offices and a terrace on a tower floor in the Midtown South property. A spokesperson for the project declined to provide the asking rent.

The firm will move from its current Flatiron home at 5 West 19th Street. CEO Phil Schraeder said in a statement that “our intention with the space is to not only build a communal area for our team, partners, and clients to come and collaborate but an eco-friendly, sustainability-focused office space, including a community garden on the amazing private terrace.”

GDS and Corem Property Group recently completed the 23-story, 200,000-square-foot office building at the corner of West 31st Street and Broadway. Other tenants in the property include 101 Studios, A24, Avalanche Studios and a yet-to-be-named eatery from Matthew Kenney Cuisine.

Paul Amrich and Neil King of CBRE represented the landlords in the transaction. Matthew Siegel from Newmark handled the deal for GumGum. Spokespeople for both brokerages didn’t immediately respond to requests for comment.