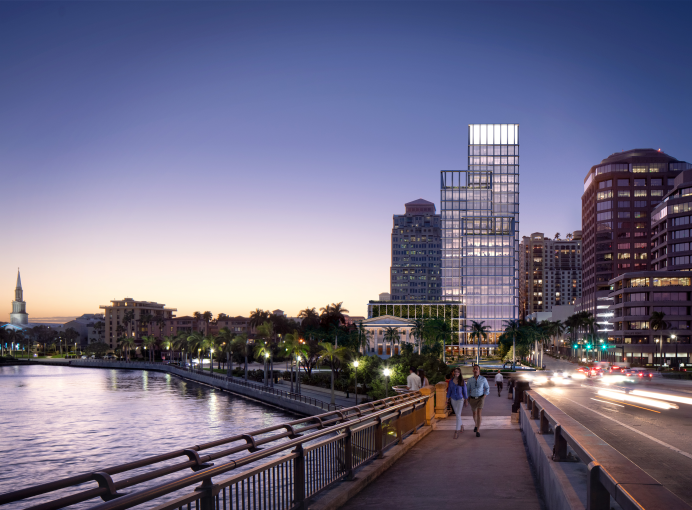 The luxury development, slated for completion in 2024, is now 60 percent preleased, and Related anticipates it being 75 percent leased by the end of the year, said a spokesperson for the developer. Tenants include First Republic Bank, financial firms Siris Capital, GTCR and Diameter Capital Partners as well as high-end Greek restaurant Estiatorio Milos, which is taking 10,000 retail square feet.

The financing — which comes from Michael Dell’s investment firm MSD Partners and arranged by Eastdil Secured — is one of the largest construction loans for a South Florida development this year. Terra came close when it secured $230 million in August to build a mixed-use development near Miami International Airport.

One Flagler has garnered controversy because of its location. The First Church of Christ, Scientist sold the 2.5-acre site behind its historic church, which dates back to 1928, to Related for about $20 million. Some church members opposed the move.

West Palm Beach residents also voted twice to block skyscrapers such as One Flagler, favoring instead to keep a five-story cap.

Despite the pushback, Related is West Palm Beach’s largest Class A landlord. Over the past two years as financial firms flocked to the city, it paid over $500 million for office properties, including CityPlace Tower and the Phillips Point complex.

360 Rosemary, the most recent office project Related completed, is fully leased, having landed financial heavyweights such as Goldman Sachs, Blackrock and Elliott Management as tenants.

Just last month, on the same block as 360 Rosemary, the developer proposed one of the city’s largest offices, spanning 456,000 square feet.

In Miami, where Related founder Ross owns the Miami Dolphins football team, the company is also developing a 1,000-foot tower in partnership with Swire Properties, which could become the city’s tallest building.

Update: The article was amended to include Eastdil Secured’s involvement.