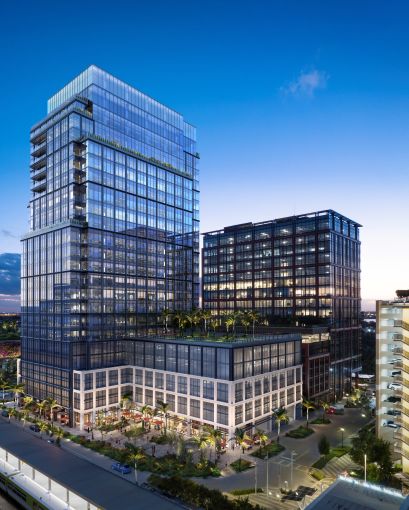 Betting that companies will continue to relocate down south, Stephen Ross’ Related Companies — West Palm Beach’s largest Class A office landlord — is proposing to build one of the city’s largest offices.

The New York-based developer is seeking to build a 25-story office building in the city’s downtown that would feature 456,000 square feet for offices and 15,000 square feet for retail, the firm announced. If completed, the project would bring Related’s total office footprint in West Palm Beach to over 2 million square feet.

Dubbed 515 Fern, the project — which is set to break ground in 2023 and be completed by 2025 — would stand within the same block as 360 Rosemary, an office development Related completed last year,

It would also stand a block south of the Brightline train station. Related plans to build a connecting road from 515 Fern to Evernia Street, where the station is located.

It appears that Related does not own the site. A Montreal-based company paid $5 million for the half-acre parcel, which houses a 6,000-square-foot office building, according to property records. A spokesperson for Related has yet to respond about the development’s potential partners and financing.

360 Rosemary, now fully leased, attracted some of the financial world’s biggest names during the height of the pandemic when many executives decamped to Florida. These included BlackRock, Goldman Sachs, Elliott Management and Point72 Asset Management.

Last year, in response to the demand, the developer broke ground on One Flagler, another Class A tower, which is set to be completed by next year.

Over the past two years, Related has also gone on an office shopping spree in West Palm Beach, paying $282 million for Phillips Point, a two-tower office complex, and $175 million for the 18-story CityPlace Tower, to name just two office transactions.

In Miami’s Brickell district, Related is in the early stages of developing an office skyscraper, which could become Florida’s tallest tower.