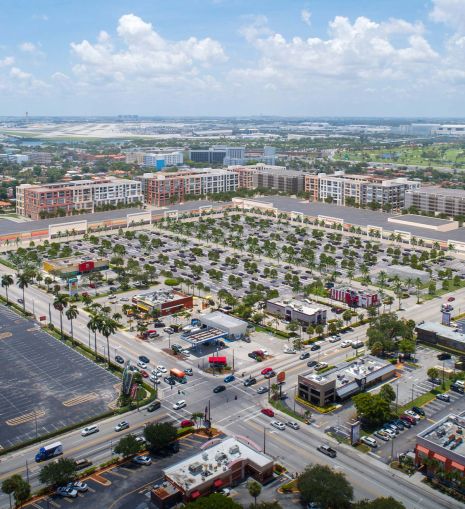 Four months after settling a civil lawsuit over the deadly condo collapse in Surfside, Terra scored $230 million to build a massive mixed-use campus near Miami International Airport, the developer announced.

The construction loan from Apollo Global Management and Mack Real Estate Credit Strategies will fund the first phase of the development, CentroCity. It will include approximately 350,000 square feet for retail, a Mater Academy charter school and three eight-story multifamily buildings, totaling 470 rental units.

Construction is already underway and is slated for completion in 2024.

In 2020, Terra, led by David Martin, paid about $29 million for a stake in the 38-acre site at 3701 NW Seventh Street, between Miami’s main airport and Little Havana, according to property records.

The parcel already holds a strip mall, which Terra will renovate. The Miami-based developer also plans to expand CentroCity’s retail component, which will be anchored by a 100,000-square-foot Target store and is already 95 percent leased, according to Terra.

On the residential side, the project will house a total of 1,200 apartments when complete.

“Our ability to secure favorable construction financing for CentroCity speaks to the growing demand for low-impact infill development that will enhance an underutilized asset and make it a more positive contributor to the community while bringing much-needed market-rate housing to the area,” Martin said in a statement.

The loan is the latest financing Terra has nabbed since settling in May a class-action lawsuit over the collapse of the Champlain Towers South condominium, which killed 98 last year.

The injured survivors and family members of the tragedy alleged the construction of Terra’s condo next door to the Champlain building contributed to its collapse. Terra has denied the allegation and admitted no fault as part of the settlement agreement.

Despite the high-profile lawsuit, Terra has plowed on developing.

The firm landed another construction loan from Mack early this year; $141 million for a mixed-use project in Bay Harbor Islands. Across the county, Terra is developing a mixed-use campus similar to CentroCity connected to the Dolphin Station.

In Miami Beach, together with the family office of Crescent Heights founder Russell Galbut, Terra is building a luxury condo, Five Park, for which it secured a $345 million construction loan last year, partly from Apollo.

Update: The article was updated to include the involvement of Walker & Dunlop.