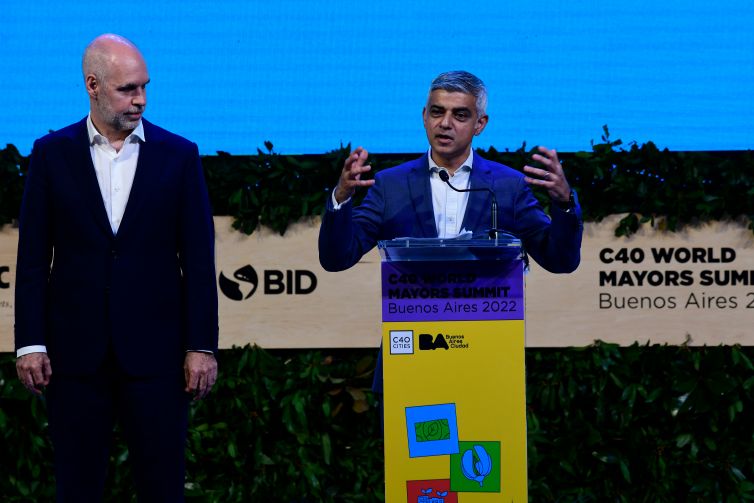 The bustling Latin American metropolis of Buenos Aires is home to more than 3 million people, and another 12 million in its environs. But along with the noise and energy of any modern city, Buenos Aires has a gentler side: a lavender treescape from blooming jacarandás that dot the city; green bike lanes supplemented by a public bike-share system; and in the city’s Palermo neighborhood, a 40-acre eco-park—a converted zoo showcasing and protecting Argentina’s biodiversity.

Such characteristics emphasize the harmony between urban and natural landscapes — an overlap that puts the impetus of protecting the environment on mayors worldwide. Buenos Aires, which promises its own climate action plan, hosted this year’s C40 World Mayors Summit from Oct. 19 to 21. The conference continued a global conversation about how cities can combat climate change through technologically smarter, more creative and resilient infrastructure.

Most likely, the worst consequences of climate change — and the ultimate manifestations of climate actions — won’t fully come to fruition during the term of any one mayor. However, public officials have the responsibility of considering the future beyond their current roles and positions. The theme of cities as communities of change-makers anchored the conference.

Climate action is ultimately about a people-centric future, said Vanessa Hauc, an anchor at Noticias Telemundo and the co-founder of sustainability nonprofit Mother Jungle. Hauc jump-started the event, whose United States attendees included Eric Garcetti of Los Angeles, Francis Suarez of Miami, and Eric Adams of New York, among others.

“We should do [climate advocacy] as human beings,” echoed Horacio Rodríguez Larreta, the chief of government of Buenos Aires. “Today climate change is an unparalleled scientific fact.”

Climate change is an undeniable area in which global cities can, have and must work quickly — and together. Despite differences in politics and cultures, cities can converge in the fight for long-lasting change, which can occur only if sustained through generations, said Larreta.

Yet as cities begin to implement all kinds of innovative solutions, certain assumptions and preconceptions about climate change interfere with tangible action. Larreta debunked some biases. Most notably, he spoke to global warming’s breadth of impact; no one person or region is free from the consequences of climate change, Larreta said.

Certainly, climate change disproportionately affects the poorest countries that lack sufficient infrastructure and resources. However, global warming has a worldwide impact. Europe saw one of the most severe droughts in over a millennium, while parts of North America hovered atop the list of worst droughts historically. Meanwhile, flash floods devastated parts of South Asia.

“I’m afraid to say the science was wrong,” said Sadiq Khan, the mayor of London and the chair of C40 Cities, the group that organizes the conference. “But not in the way climate deniers would have you believe. Our climate is actually deteriorating at a much faster rate than even the most pessimistic models predicted. The science was wrong because it was too optimistic.”

Khan acknowledged the difficulties of climate efforts; for some cities and countries, endeavors are neither straightforward nor easy, requiring ample resources.

Humankind, however, is rapidly turning the climate into a weapon of mass destruction, said Khan — making climate action all the more urgent. Whether London, New York or Buenos Aires, no city is immune to the risk of disaster. To address environmental threats, cities need to decarbonize and make fossil fuels redundant.

These efforts call for direct, immediate action rather than pledges and conferences. World leaders are good at pledging, not implementing, said Hilda Flavia Nakabuye, founder and organizer of Uganda’s Fridays For Future, a youth-led activist movement. She noted that more than 70 percent of all emissions come from cities. While the C40 Summit is certainly a step in the right direction, policymakers need to spend less time in meetings and more time in action, said Nakabuye.

The summit’s panel discussions highlighted some potential actions. One forum, entitled “Developing Green and Thriving Neighborhoods,” centered around the idea of the 15-minute city: an increasingly popular neighborhood planning tool and strategy. Following the pandemic, 15-minute cities have become especially prevalent, given the convenience and ease of flexible working models.

“The model of 20th century city design is no longer a fit for today,” said Mark Watts, the executive director of C40 Cities.

Historic models of city neighborhoods typically separate residential from commercial and business infrastructure. Transportation is often organized around populations that can afford to travel by car, said Watts. This inaccessibility ultimately results in long commutes with high levels of carbon, as well as unsustainable lifestyles and an inequality of access to amenities.

As such, 15-minute cities offer a people-centric alternative to traditional urban models. They provide a city framework in which residents can meet their everyday needs within a short distance.

Just don’t take the name literally. Across the world, municipalities have sought 15-minute cities under various aliases. Depending on the city’s scale, 15 minutes can easily stretch to 20 or 30 but maintain the same general principles. Paris, for example, uses the “15-minute city” metric, whereas Rome and Barcelona dub the same premise “superblocks.” Meanwhile, Melbourne and Portland, Ore. — sizable, spread-out hubs — bumped the 15-minute city timeline to “20-minute neighborhoods.”

“More than anything, the 15-minute concept is taking us back to the neighborhood, rather than the top-down big strategic approach to the metropolis,” said Watts.

Watts then passed the floor to Professor Carlos Moreno, scientific director of Pantheon-Sorbonne ETI Lab and the man who first developed the concept of the 15-minute city. Moreno set the tone for an ensuing panel discussion: “The 15-Minute City: From Concept to Reality.”

The concept of a 15-minute city addresses both climate and human-centric concerns, said Gualtieri. Proximity isn’t only about access to physical buildings or services but also about the convenience of relationships. All neighborhoods should provide public services, as well as encourage active participation and closer human interactions.

The humanity underlying neighborhoods provided a segway into the next panel: “Building Low-Carbon and Resilient Neighborhoods.” Ben Smith, director for energy and climate change at British engineering firm Arup, moderated the conversation with Bruce Harrell, the mayor of Seattle; Jan Vapaavuori, senior adviser for urban development at urban investor NREP and the former mayor of Helsinki; and LaToya Cantrell, the mayor of New Orleans.

Previous speakers dubbed climate change one area in which populations can converge despite differences. Similarly, building low-carbon neighborhoods requires a broad brushstroke over population disparities. Seattle, like many major cities, is economically stratified between the ultra-wealthy and lower-income populations, said Harrell.

When it comes to the climate, however, everyone wants the same outcomes: clean air, tree canopy, quality water. Climate discussions therefore call for a one-scale concept in which everyone deserves access to like resources.

“In Seattle, we lead with equity,” summarized Harrell.

To work toward equity, policymakers have, yet again, turned to their communities. As part of its resiliency efforts, Seattle has re-examined many of its assets in underserved areas. The city is seeking ways to convert community centers, libraries, parks and schools to solar power and the like, disaster-proofing public spaces, and making neighborhoods greener for their residents.

New Orleans is a city that knows all too well the impact of natural disasters on a neighborhood’s inhabitants. In 2005, Hurricane Katrina ravaged the city, shifting New Orleans’ focus toward mitigating future flooding. Now, the city is taking a bottom-up approach to climate change and engaging residents on projects that meet them exactly where they are.

“The world’s greatest experts on where they live are the residents themselves,” said Cantrell.

To increase neighborhood resiliency, New Orleans has invested grant funds into its first resilience district. The Gentilly Resilience District coincides with a series of environmental projects, including the building of blue and green corridors that will slow and store stormwater; the retrofitting of woodlands to capture water and preserve nature in the Dillard Wetlands; and the improvement of the Dwyer Canal as part of the Pontilly Neighborhood Stormwater Network.

Beyond Gentilly, the city has other storm projects underway across districts. These efforts protect both the environment and its inhabitants, said Cantrell — a sentiment of duality that reverberated throughout the conference, as well as in the panel’s closing remarks.

To promote walking, for example, cities should create neighborhoods in which people walk more without intentionally deciding to do so, said Vapaavuori. Rather, residents walk because it’s the natural and pleasant choice, one made possible via a deliberate neighborhood vision.

A neighborhood vision can ultimately foster happier, healthier lives, said Vapaavuori. Getting to that point means creating the social and ecological infrastructure for community building health and biodiversity; connecting said infrastructure with greener forms of mobility; and reducing emissions with net-zero buildings and energy systems.

Neighborhoods aren’t about homes but about lives, said Vapaavuori.