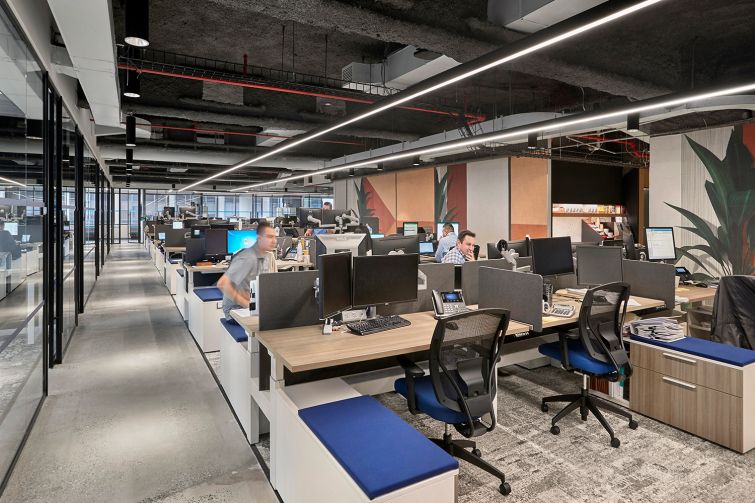 Companies are finally moving away from the traditional workplace centered around a corporate headquarters where employees gather on a daily basis and all the leadership presides. When employees were forced to adjust to working away from the office during the pandemic, some discovered that their productivity relied less on where they work and more on how they work.

Now, employers are looking at innovative workplace models that incorporate the new lessons  learned during the pandemic. These models include improved versions of prior workplace trends. Hub and spoke, for example, is a popular model used by many companies that includes one central office and smaller satellite offices.

The newest version of that is “hubquarters,” a network of smaller locations designed for both collaboration and independent work. These could be a cluster of small offices, coworking spaces and other remote locations, including home offices. All locations can be a vibrant part of the network, with key leadership present and a dynamic mix of teams collaborating in various combinations to meet  increasing employee demands for flexibility.

A different kind of hybrid

Despite the benefits of the in-office work experience, however, multiple surveys indicate more employees want to work in a hybrid workplace where they have more freedom over when they work in the office and how they collaborate. As a result, employers are increasingly embracing the idea to attract and retain top talent.

Under the basic hybrid model, employees work in the office on certain days and remotely on others, which can either be regulated or autonomous. This can create a number of challenges. Hybrid models can leave large office headquarters looking like ghost towns. The new hubquarters network model transforms that headquarters into one of many hubquarters. The former headquarters size may shrink, but the hubquarters will offset that loss of space.

It’s important to note that hubquarters will look different in each market. Established hubs like Silicon Valley and New York will remain an important center and new hubs of talent will emerge, driven by the desire for a shorter commute and in-person collaboration.

Hubquarters offer employees multiple options to work in person with colleagues as well as independently closer to or at home.

Tech giants appear to be taking the lead on this approach. Amazon has opened offices in 17 North American cities with plans to open six more, which closely resembles the hubquarters model. Last year, Google executives said they were considering adding smaller hub offices to give employees more flexibility around where they live. And Fujitsu recently announced plans to reduce its office footprint by 50 percent while giving employees the option to work from home, a hub or satellite offices closer to where they live.

A major factor prompting companies to adopt the hubquarters model is cost. Maintaining a large, half-empty headquarters prohibits many companies from having smaller satellite offices. Hubquarters not only take up less space and require less energy use from appliances, air conditioning and heating, they reduce companies’ carbon footprint by decreasing emissions from shorter commutes.

Though hubquarters offer increased flexibility for workers and savings for companies, it remains hindered by tradition and, if leadership sticks close to one hubquarters, then employees who work better outside of the hub have fewer opportunities for collaboration with leadership.

Collaboration doesn’t have to happen in an office to be successful, however. The survey also reported that nearly 70 percent of those who described themselves as satisfied with their job indicated they collaborate with people outside of their office at least once or twice a week. This demonstrates that collaboration shouldn’t just be reserved for hubs.

If the pandemic showed employees they can work from anywhere, then leadership needs to be more proactive about meeting employees where they are. Moving forward, employees need a workplace that operates more like a central nervous system with leadership that traverses the entire system, moving from hub to hub, and serving as the catalyst to get synapses firing, literally.

Petra Durnin is the head of market analytics at Raise Commercial Real Estate.