Tackling Office Buildings’ Biggest Pollution Source: Commutes To and From Them 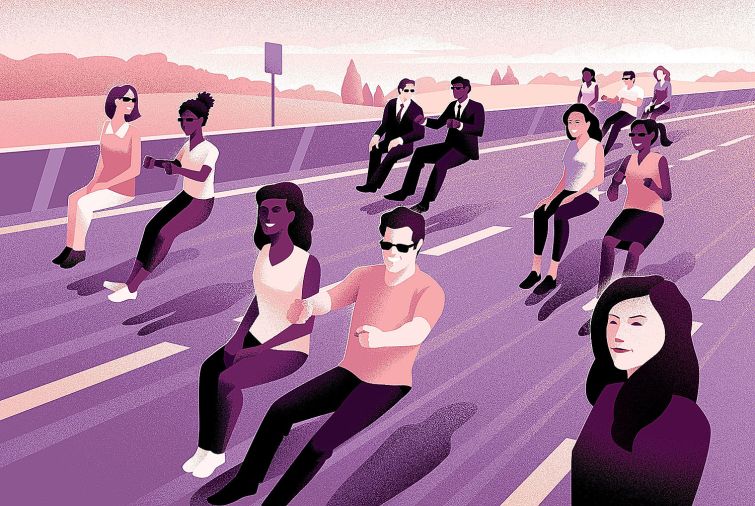 Rush hour patterns have shifted pretty drastically — a pandemic side effect with the potential to improve lives, as well as the environment.

Commutes have long been one of the largest contributors to greenhouse gas emissions, but they’ve also been ingrained in American life. However, the COVID-19 pandemic-induced shift to flexible work models has shown that it’s possible to reduce the carbon footprint of the daily commute by changing behavior, instead of building shiny new infrastructure or fancy upgrades. To truly get behind the environment, employers and employees are re-evaluating getting behind the wheel.

Reducing carbon emissions in the workplace requires companies to re-examine efficiency from all angles. Firms in real estate and at large have widely begun to reduce their direct emissions by adopting greener infrastructure, installing more eco-friendly systems and minimizing energy outputs, among other steps. These endeavors will certainly drive a greener future, though to truly steer climate change — in a good way — companies will need to address their indirect emissions as well.

One easy way to do that is through one particular source: commuting.

“The biggest emissions source of an urban office building is travel to and from that building,” said Matt Caywood, CEO and co-founder of software company Actionfigure, which curates smarter, greener transportation solutions. (The EPA also says commuting is the single biggest carbon emitter.)  “And that exceeds the systems, energy, the HVAC and lighting and all the building’s operating energy emissions by about 15 percent on average; so it’s 115 percent of that.”

Other estimates have fallen in a similar range to the 15 percent cited by Caywood. Commuting accounts for 11 percent more energy than the energy used by a new code-compliant office building, according to a 2018 article from BuildingGreen. For existing buildings, this percentage is even higher; transportation energy overtakes operational energy by 16 percent.

Transportation is also a high priority for business workers, particularly because long commutes have been recognized as unsustainable for work-life balance. Couple a commute’s effect on mental health with its environmental impact, and it’s about time transportation patterns shifted. Granted, the days of commuting — and road traffic — aren’t behind us quite yet.  According to both Bloomberg and Axios, the pandemic didn’t eliminate traffic altogether; it simply reshaped road patterns.

For any company, however, commuting falls under the regulatory umbrella of Scope 3 emissions, so the carbon from commuting is not, technically, under the control of the company itself. This lack of direct oversight decentralizes accountability and makes unsustainable commuting a difficult problem to address.

“The fundamental challenge is that, in the past, people have not had the data that they need to account for these emissions of a building,” said Caywood. “It’s easier to wire up the building’s generator or the furnaces and figure out what the emissions are and the Scope 1 energy usage is.”

But the advent of the flexible work model, catalyzed by two years of pandemic living, has presented a new opportunity for more efficient — and minimized — commutes.

“It used to be normative, before the pandemic, that you were at your post Monday through Friday, 9 to 5, or whatever it was,” said Joel Steinhaus, CEO of coworking space Daybase.

Indeed, COVID-19 restructured norms surrounding in-office work that have since seen new sentiments toward commuting cropping up. Rather than treating the trip to the office as part of a mindless routine, employees can instead stack in-person meetings and purposefully design their schedules, said Aaron Landry, Actionfigure’s director of content. In doing so, employees can reduce the frequency of their commutes — and their corresponding carbon footprints.

Granted, the debate about remote work models has presented both pros and cons for employees and employers, and its impact on the environment is not the only factor at play. In fact, fewer commutes also impact transit infrastructure.

Although the pandemic has shifted transportation patterns, it’s undeniable that there is widespread rejection of the daily, stringent commute that it may never recover from. An April survey concluded that roughly 8 percent of Manhattan employees are working in the office five days a week. Meanwhile, a commuting survey from the Metropolitan Washington Council of Governments showed that, for employed residents of the D.C. metro region, weekly commute trips in 2022 by car, transit, walking, biking and carpooling are significantly lower than in 2019.

Such changes suggest that flexible working models have not only upped the convenience factor for employees, but have also presented a more mindful approach to both working and driving.

“In some ways, the enemy of efficiency is just everyone’s in a routine,” said Caywood. “The changes, this disruption of hybrid and remote, creates a lot of opportunities to make things more efficient, if we’re clever and intentional about it.”

Transportation can achieve a greener effect if people simply stay closer to their homes. This method of reducing automotive carbon footprints expands upon previous discourse about the use of electric vehicles. Switching to electric vehicles and building more charging stations are surely steps in the right direction for greener real estate. However, EVs are not enough on their own, said Caywood.

“Transportation’s a huge wedge of carbon,” said Caywood. “It’s the biggest one in the U.S., and personal vehicles are the biggest part of that. So, there’s a number of studies showing that from a climate change mitigation perspective, electrifying vehicles is not going to be enough.”

To truly make transportation greener, employees and employers alike — not to mention any citizen of the world — should pursue more efficient trips, Caywood said. He recommends electric vehicles, public transit, e-bikes and walking whenever appropriate. Carpooling is another alternative, known to reduce carbon dioxide emissions.

In addition to reimagining work commutes via daily transportation, the pandemic has also spurred a change in business travel by air. Emissions drastically declined when planes were grounded during the early stages of the pandemic, and, while flying is now an option for business travelers, many employees have opted to forgo flights. In February 2022, 42 percent of business travelers said they’ll never return to the air, according to data from Morning Consult. For comparison, 39 percent of travelers held that stance in 2021. (However, that same report also noted an increased interest in leisure travel.) In Steinhaus’ words, why would employees “burn an entire day and literally burn [their] carbon footprint” when they can simply hop on a Zoom call and do those same meetings remotely?

The convenience of working online has surely propelled flexible models and commutes forward. However, collaboration remains essential for many company operations. Getting employees to work together in person requires a restructuring of both in-
office schedules and a consideration of how — and when — employees are actually getting to work.

“There’re a lot of employees who want in-person collaboration, but they also complain that they don’t want a bad commute,” said Landry.

Many employees now expect commutes to not be expected but warranted,  which has caused some office owners to greatly enhance  their office amenities — even as there has been a subsequent backlash as employers see a pending recession as a hefty piece of leverage and are thus pulling numerous perks that have accumulated since 2020.

Actionfigure takes it a step further, suggesting that even when a commute is justified, there are still ways to increase its efficiency. The platform provides employees with the full range of options for commuting, including shuttles, smart parking, EV charging stations, bike facilities and the like. The software also takes into account the time, cost and emissions of each of those commute options.

Another effect of the shifting work model is the rise in coworking space as an alternative to the office. Coworking spaces have capitalized on the desire for minimized commutes, meeting the demands of an increasingly flexible workforce directly in employee neighborhoods. In fact, coworking provider WeWork cited a shorter commute as a major perk. In addition, many residential and mixed-use landlords are incorporating coworking spaces into their buildings, developments or downtown hubs.

There is one caveat, however. It’s not entirely clear whether working from home is actually more environmentally efficient, said Steinhaus. Although work from home has surely minimized commutes and their corresponding emissions, the trend has also forced people to rely on their own technology and HVAC systems, rather than using one communal source of energy that benefits multiple people simultaneously.

“You may have to be duplicating devices, you may actually have a much less efficient HVAC system than I do,” said Daybase’s Steinhaus. “The fact that you’re using your home, which was not designed for work and was not designed efficiently for work, instead of coming to a place where there are other people using the shared resources, that’s sort of what [Daybase is] about.”

That’s one way that coworking spaces can offer an alternative to both in-office and work-from-home options.

“We should not waste the pandemic relative to behavioral shifts when it comes to the potential for positive environmental outcome,” said Steinhaus.