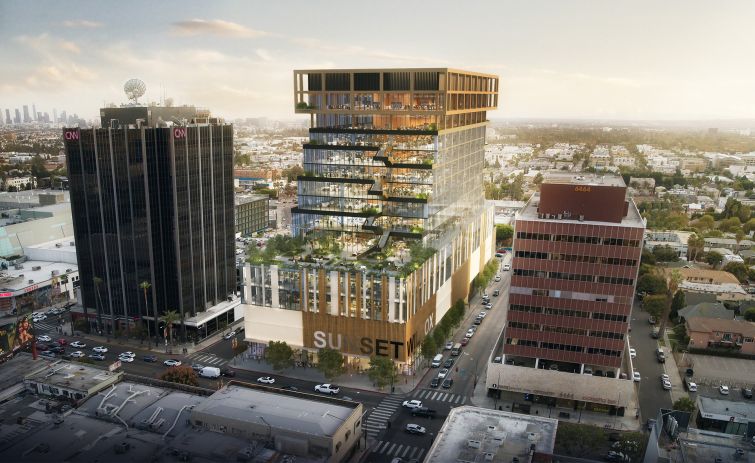 The Gensler-designed development at the intersection with Wilcox Avenue will rise 275 feet. MP Los Angeles

A new tower with 431,000 square feet of office space is set to rise on Sunset Boulevard in Hollywood after getting the green light from the Los Angeles Planning Commission Thursday.

The nine-member board signed off on the plan by Millennium Partners and Shorenstein Properties to demolish the Staples store and other commercial buildings at 6450 Sunset Boulevard to make way for Sunset + Wilcox, Urbanize reported. The Gensler-designed development at the intersection with Wilcox Avenue will rise 275 feet with 15 stories, and it’s expected to be complete in 2026.

Hollywood’s office vacancy rate has decreased for four consecutive quarters, to 21 percent, and it’s one of the few markets with year-to-date net absorption, according to Colliers’ most recent report. There’s about 6.2 million square feet of office space in Hollywood, and the average asking rate for Class A space is $4.93 per square foot per month.

Several major creative office and mixed-use projects are in the works in Hollywood. For example, the firm CMNTY Culture plans to build 500,000 square feet of creative office and studio space at the corner of Sunset Boulevard and Highland Avenue, and another project called The Star is set to replace small offices on Sunset Boulevard with approximately 500,000 square feet across the street from Sunset Gower Studios. Millennium Partners is also behind the $1 billion Hollywood Center development, which could potentially include 386,000 square feet of office space.

Brian Lewis, a spokesperson for the development team, told Urbanize in a statement that Sunset + Wilcox will be the first all-electric office building in Greater L.A.

“The urgency surrounding the climate crisis compels us to take this vital step now even though such action is voluntary and not required by law,” Lewis said. “Considering that gas used in residential and commercial buildings is a significant source of greenhouse gas emissions, there are multiple health, climate and economic benefits associated with transitioning to all-electric buildings. Electrification creates healthy working and living environments.”