Companies are clawing back pandemic-era perks at the office. Did workers ever care about them that much? 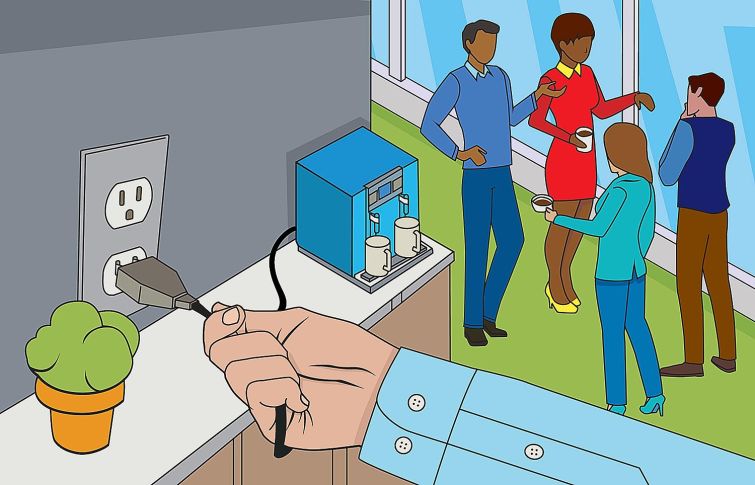 Company perks are like icing on a cake. It’s not a must but it’s good to have  — and it looks pretty bad when you scrape it off.

But during COVID-19, the little extras were even more heavily emphasized. Perks (and amenities) were the thing that many on both the tenant and landlord side believed would induce workers to return to their fancy (and pricey) Manhattan desks.

Now that the pandemic is over, according to President Biden — and considering the fact that many market observers worry about a recession possibly on the horizon that would give employers leverage they did not have a few months ago — does this still hold true?

A junior banker from Goldman Sachs told Commercial Observer that the investment bank had pulled away the free coffee cart in the lobby of its lower Manhattan headquarters during the first week of September, but staff can still get coffee on each floor and cafeteria. As a double whammy, that same week, several Wall Street giants lifted COVID-19 protocols with a mandatory return to a five-day workweek. Goldman was one of them.

“One thing I would love to know is if the CEO of Goldman Sachs has his free coffee taken away,” said Raphaël Morgulis, spokesman for Locatee, a Switzerland-based tech company that provides workplace analytics solutions.

It’s not just the coffee. Other perks at Goldman Sachs have slowly been going away. The firm started offering free breakfast, lunch and car rides to and from the office during the pandemic, one source said. On April 20, The New York Post reported the bank pulled the rides and free lunches a day after raising its meal allowance from $25 to $30 following employees’ complaints. The company will now pay for the car rides only for employees who work late, according to people familiar with the matter.

“Perks are difficult to remove once people have gotten used to them,” Allison S. Weiss, principal and founder of CRE Recruiting, said. “Maybe the pendulum has shifted from a candidate-driven market to an employer-driven market again.”

Before the pandemic, big banks such as JPMorgan Chase and Morgan Stanley had a tradition of giving U.S. Open tennis championship and Major League Baseball tickets to top performers at the firms. However, unless they’re bringing a client to the game, bankers now need to pay for their tickets, a source from JPMorgan lamented.

And the impact has an unintended reach that extends beyond corporations saving a few bucks.

“Taking resources away from core benefits often has a negative impact on the most important business metrics — namely, employee retention, productivity and engagement,” said Lívia Martini, chief people officer at Gympass, a well-being platform for employees.

Further, cutbacks at U.S. banks open up opportunities for European competitors. Bloomberg conducted a survey of the top 12 European banks in September, including UBS Group AG, Deutsche Bank and Societe Generale. The results showed that all of them allow employees to work remotely for part of the week.

“Whether you like it or not, the office is competing with the home office. That’s just a fact,” said Morgulis. “And then the question is, what is the office adding to the employee experience?”

Viewing flexibility as a competitive advantage, several European banks are supplying staff with the equipment to make working from home easier. Spain’s Banco Bilbao Vizcaya Argentaria is providing phones, laptops and, if requested, a chair, a screen, a mouse and a keyboard to its employees, Fortune reported.

“Companies are still kind of transitioning from focusing on costs to starting to focus on employee experience,” said Weiss. “The people who are making these return-to-work policies are very isolated from the people who are the most impacted on a daily basis.”

However, what do company perks really mean to employees?

Some employees find the perks trivial and even somewhat insensitive, considering the fact that their economic situation has actually deteriorated over the last few years. “People are really feeling the pinch of inflation,” Weiss said, citing conversations she’s had with job seekers. “It’s great that companies want to provide Nespresso coffee at work. Employees might rather get paid 5 percent more because they can’t afford the same lifestyle anymore.”

Also, it’s not just about general company perks. It’s about the right ones that really matter to the staff. Discussion around company perks often exposes the disconnection between employers and staff.

“We learned during COVID that what employees really seek, in addition to those fundamental table stakes of good compensation and great work, is flexibility,” said Annemarie DiCola, the CEO of data provider Trepp. “This is a difficult economic time that we’re in. And I certainly respect what other companies may have to decide to do about that. But a value-focused, community-centric alternative might actually be far more engaging to your valued employees than free snacks.”

One U.S. bank offers an example. Back in March of 2021, Citigroup urged its staff to limit video calls with so-called “Zoom-free Fridays.” The investment bank’s chief executive, Jane Fraser, said May 28 would be designated as a company-wide holiday too, to be known as a “reset day.” However, starting the week of March 21, 2022, the bank asked vaccinated employees in all U.S. locations to start returning to the office for at least two days, Reuters reported.

“Free coffee or kombucha on tap are nice-to-haves, but the most important benefits are the ones that address both physical and mental health, and provide employees with the flexibility to take their well-being into their own hands in a way that fits their lives,” said Martini. “This includes, of course, health insurance, sufficient paid time off, and access to fitness and well-being benefits.”

Marking the first year back in the office, Trepp held an intra-company fundraising event to support food insecurity and mental wellness charities in the U.S. and the U.K.

“Things that trump beer, pizza and U.S. Open tickets are when you tell your employee, ‘We care about you,’ ” said DiCola. “ ‘We want you to stay here and do more great work for us. And we’re going to strengthen you to do even more things. We’re going to teach you more things, round you out, and make you an even fuller professional than you already are.’ ”

Cutting off perks may be a reaction to the current employment market as many companies are tightening their belts, but it actually reflects something deeper than just a cup of free coffee or a car ride.

“Perks are helpful. But I think at the end of the day if you don’t have a company culture that is productive and encourages people to want to participate in the office environment, it doesn’t matter how many pizza parties you throw or how much kombucha you have on tap,” said Weiss.

A Goldman Sachs spokesman declined to comment on the bank’s policies.