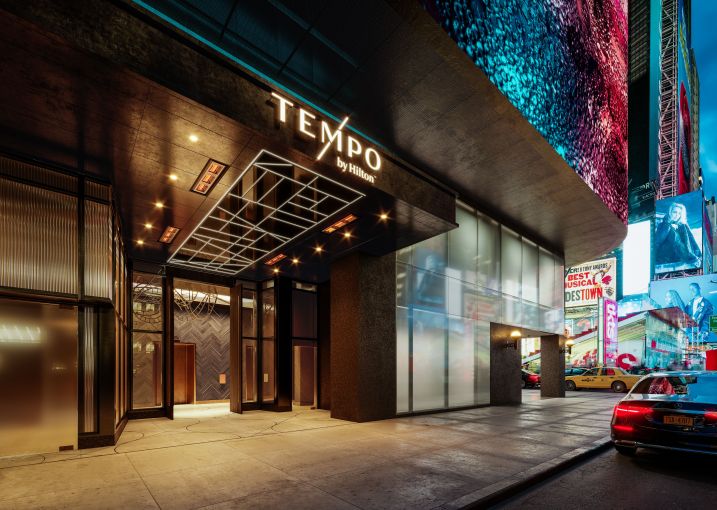 Times Square will soon accommodate even more tourists as Hilton Worldwide Holdings plans to open a massive 661-room hotel in an under-construction development.

The hotelier will launch the first in its Tempo by Hilton brand at TSX Broadway, as Times Square and the tourism industry steadily trudge back from pandemic-induced near ruin, the Wall Street Journal first reported.

“With the city’s continued development boom, it was the perfect time to introduce our newest lifestyle brand and Tempo by Hilton’s first hotel to the world’s most dynamic destination,” Danny Hughes, executive vice president at Hilton, said in a statement.

The hotel will be situated in L&L Holding and Fortress Investment Group’s $2.5 billion, 550,000-square-foot development at 1568 Broadway, next to Times Square’s red bleachers. Construction on TSX Broadway began in 2019 and is expected to be complete next year.

“As our newest brand, Tempo by Hilton is designed to create an elevated and innovative stay, with thoughtfully appointed rooms that offer comfort and functionality plus an emphasis on well-being,” Matt Schuyler, chief brand officer at Hilton, said in a statement. “Tempo by Hilton Times Square will set the stage for a new standard of hospitality in Times Square, for today’s discerning traveler.”

TSX will provide travelers with retail and entertainment sites, including the Palace Theatre, a historic venue that was lifted 30 feet above its original location to the third floor of L&L’s new asset. It will also be home to the TSX Entertainment company.

The hospitality industry didn’t — or possibly couldn’t — back down in the midst of uncertainty during the pandemic lows, and several other new hotels are planned in the city, including Marriott’s Edition planned for 701 Seventh Avenue, also known as 20 Times Square.

The breadbasket of New York City tourism also attracted investment by Sharif El-Gamal, the chairman and CEO of Soho Properties, whose organization put $400 million on the table with the Margaritaville Resort Times Square, the franchise’s flagship, at 560 Seventh Avenue. The “parrot head” haven opened in July 2021 and had a steady 75 percent occupancy by November of that year, Commercial Observer reported.

Hospitality is not the only industry putting its eggs in Times Square’s basket, with TikTok recently taking 232,000 square feet at the Durst Organization’s 4 Times Square, now known as One Five One.