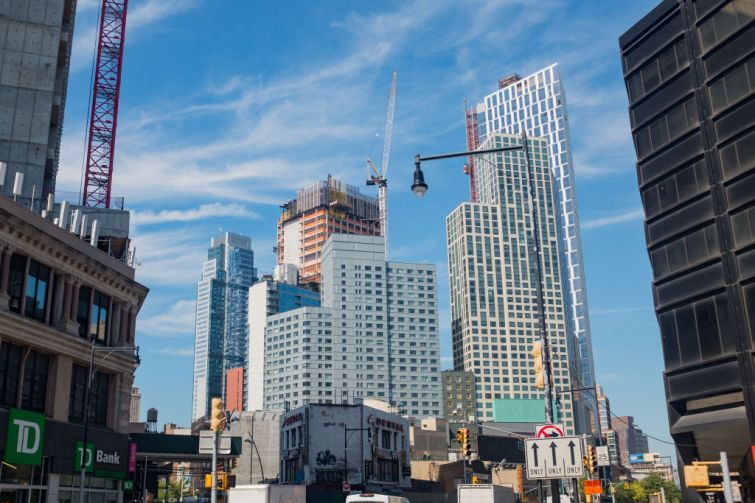 A general view of high rise and new construction as seen from Flatbush Avenue in downtown Brooklyn. Photo: Epics/Getty Images

More apartments are expected to be built in New York City than in any other city in the U.S. this year, according to a report from RentCafe and Yardi Matrix.

The report found that New York will construct 28,152 of the 420,000 new units to come online nationwide by the end of the year, the first time New York will lead the country in building apartments since 2018. The housing can’t come soon enough as New York faces skyrocketing rents and low supply.

Pandemic-driven shipping and supply delays slowed construction in 2020, but it rebounded last year when the U.S. saw 423,000 apartments completed, the most built in the country since 1972, according to RentCafe. And demand for rentals rose as high home prices pushed would-be buyers into increasingly expensive apartments, according to the report.

“The construction industry is finally returning to pre-pandemic levels of activity,” Doug Ressler, manager of business intelligence at Yardi, said in a statement. “But [it] is still being hampered by three familiar challenges: labor shortages; material costs and availability; and supply chain issues.”

The average U.S. rent increased to a record $1,879 in July, a 12.3 percent jump compared to the same month last year, according to Realtor.com. In New York, average Manhattan rents surpassed $5,000 for the first time in July and neared $4,000 in Brooklyn, according to a report from brokerage Douglas Elliman.

National rent hikes began to cool in July and new construction could help drive them down, according to Realtor.com. RentCafe forecasted that other cities struggling with high rents and low housing supply, such as Washington, D.C. and Los Angeles, will build more than 11,000 apartments each.  RentCafe anticipated that 10 major U.S. cities it studied will gain more housing units than their total deliveries in the last five years.

One of those cities, Miami is expected to build 19,125 apartments this year and has already finished 3,000, though that has not eased demand in the city after rent went through the roof as remote workers fled to its sunny shores during the pandemic, according to the report.