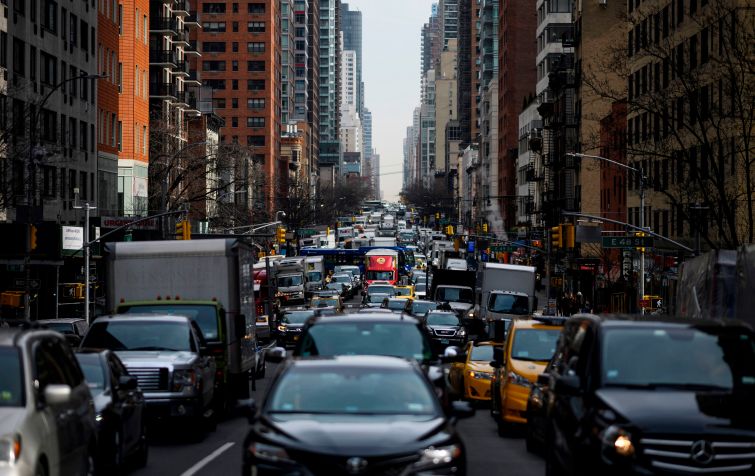 Traffic moves on 2nd Avenue in the morning hours on March 15, 2019 in New York City. Photo by Johannes Eisele / AFP

The Metropolitan Transportation Authority (MTA) hit the throttle on the long-stalled congestion pricing Wednesday, revealing that it could cost motorists up to $23 to take a car below 60th Street in Manhattan.

The agency released the environmental assessment for congestion pricing, first proposed by disgraced Gov. Andrew Cuomo in 2017 and placed in the ether by the Trump administration, which failed to provide New York with guidance for approval of the program. The MTA showed it could cost between $5 to $23 to drive through Manhattan’s central business district, depending on the time of day and type of car. The report, which is hundreds of pages long, is a requirement of the Federal Highway Administration (FHWA) before it can put its stamp of approval for the state to move forward with implementation.

While paying up to $23 to drive through Manhattan could be a hard pill to swallow for some motorists, the plan is worse for commercial trucks, which could pay anywhere from $12 to $82 during peak hours.

The report claims that overall traffic would be cut by 15 to 20 percent after congestion pricing gets implemented, with truck traffic dropping a whopping 55 to 85 percent. Taxis, city buses, emergency vehicles, those transporting people with disabilities, and cars belonging to residents within the central business district who make below $60,000 per year would be exempt from paying at toll stations, which would be operated by E-ZPass. These exceptions were approved by the New York State Legislature in 2019 when congestion pricing was passed into law.

“The tremendous detail included in this assessment makes clear the widespread benefits that would result from central business district tolling,” MTA Chair Janno Lieber said in a statement. “Bottom line: congestion pricing is good for the environment, good for public transit and good for New York and the region. We look forward to receiving public feedback in the weeks ahead.”

Implementing congestion pricing would increase ridership on MTA commuter trains, buses and subways by 1 to 2 percent and raise an estimated $15 billion per year from tolls alone, contributing to the agency’s $55 billion capital plan for 2020 to 2024, according to the report.

The assessment also found that a minority of tri-state residents would be impacted by congestion pricing, with 85 percent of daily trips into central Manhattan being via public transit and costing on average only about $2.75. About 5 percent of trips into the proposed toll zones by car were made from within New York City from the outer boroughs, 3 percent were from the outlying counties, 3 percent from New Jersey and 0.2 percent from Connecticut.

The remaining 4 percent were made via other modes of transportation including taxis, for-hire vehicles, bicycles and on foot, according to the MTA.

“We must get congestion pricing done so we can invest in public transit, curb emissions, and reduce traffic, which has roared back to pre-COVID levels,” New York City Department of Transportation Commissioner Ydanis Rodriguez said in a statement. “This draft environmental assessment is the product of three years of detailed study and is a major milestone towards delivering congestion pricing for New Yorkers.”

Now, the congestion pricing will go through the public review process with six public hearings throughout August. If the FHWA approves the plan, the state will then have 310 days to design, plan and finalize everything that will be implemented.

In late July, the program showed signs of advancing through the appointment of members to the Traffic Mobility Review Board on congestion pricing, in which a number of former and sitting real estate executives were chosen. They included Carl Weisbrod, the former head of the New York City Department of City Planning and current senior adviser at HR&A Advisors; Real Estate Board of New York president emeritus John Banks; Regional Plan Association chair and RXR CEO Scott Rechler; Velez Organization president Elizabeth Velez; and Kathryn Wylde, the president and CEO of the Partnership for New York City.