New York’s next mayor has a historic chance to transform traffic in Manhattan’s main business districts, remaking the streetscape in the process 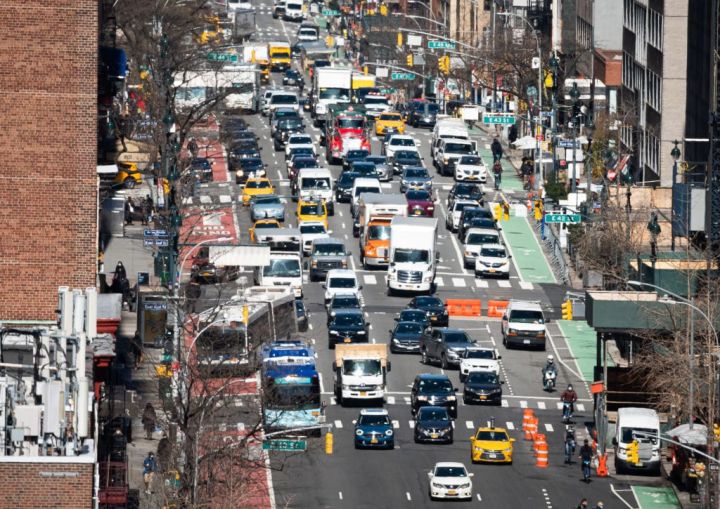 “This is what happens when the MTA makes bad spending decisions for decades,” the Democratic mayoral nominee wrote on July 8. “We need congestion pricing $ ASAP to protect stations from street flooding, elevate entrances and add green infrastructure to absorb flash storm runoff. This cannot be New York.”

Not to be outdone, New York City’s mayor for another six months demanded that the Metropolitan Transportation Authority (MTA) start charging vehicles entering Midtown and Lower Manhattan “as fast as humanly possible,” a long-awaited plan known as congestion pricing.

“I think it would be tremendously helpful at this point,” Bill de Blasio said at a press conference on Tuesday. “We need to get people back into mass transit and we need support for mass transit.”

Of the two, Adams is more likely to deal with the details of getting congestion pricing off the ground. The Biden administration signaled it would begin an environmental assessment of the plan in March, after the Trump administration blocked the assessment. The review could take several months or a couple of years, depending on the level of input and legal challenges.

Separately, the MTA has not yet convened its six-member Traffic Mobility Review Board, which will determine how much the tolls will cost and whether anyone could be exempt from them.

De Blasio nominated Sherif Soliman, the city finance commissioner, to the board on Thursday and again implored the MTA to start the process “urgently.” But, Gov. Andrew Cuomo controls the five remaining board members and hasn’t named any of them.

“It is clear the state and MTA are calling the shots on it,” Tom Wright, president and CEO of the Regional Plan Association, said. “The city’s involvement in it is through a bully pulpit or advocacy effort. That doesn’t mean the city doesn’t have a role to play or an enormous stake in the outcome.”

Adams’ support for congestion pricing has encouraged transit advocates, who say he can keep the pressure on the governor and the MTA to follow through in a timely manner.

“If Eric Adams wanted to throw a wrench into things, he could really gum it up. It’s great to see it’s not the case,” Ben Fried, a spokesman for TransitCenter, a transit-minded think tank, said. “All the public opinion polling we’ve seen in places that have done congestion pricing once it’s implemented, people really like it. The politics of it could really benefit those in office once enacted.”

It had been a long road to get those roads tolled. State legislators haggled over the merits of congestion pricing for more than a decade, until a series of nightmarish subway breakdowns in 2017 and 2018 roiled straphangers. Business leaders, including in commercial real estate, warned of economic stagnation if the subway deteriorated.

Advocates and corporate leaders joined forces in 2018 to support charging vehicles a fee to cross East River bridges. That effort failed, but the following year, state leaders approved the nation’s first congestion pricing proposal. Officials estimate that $15 billion from electronic toll receipts would flow annually into the MTA’s $51.5 billion capital program, which had been paid with government grants, fare revenues, and bonds.

The pricing scheme was supposed to start in January 2021, but the Trump administration held up its environmental assessment of the bridge tolls, due to a dispute with the governor’s office in early 2020 over a law allowing undocumented immigrants to obtain a driver’s license. The pandemic struck a month later, putting the MTA and the rest of the state into crisis mode.

Riders began to return to the subways this spring, eclipsing 2 million trips per day on April 8. Meanwhile, toll traffic has returned to pre-COVID levels over the same period. And New York, just before the pandemic, overtook Los Angeles as the city with the worst traffic in the country, according to a Texas A&M University study, with average speeds through Midtown down to 4.7 miles per hour.

But, congestion pricing could be subject to additional delays, even if the feds finish their assessment and the MTA assembles its panel quickly. The governor and state lawmakers may not want to impose a new surcharge on drivers in 2022, when Cuomo and both houses of the legislature are up for election, advocates warn. That comes with its own dangers.

“There’s a potential scenario where traffic congestion becomes a real issue in 2022,” Wright said. “Politicians are good at anticipating risk, but they might find themselves wrong-footed when voters ask, ‘What are you doing to deal with horrible traffic conditions?’”

Adams is well-attuned to slow travel times and dilapidated subway stations in his home borough. When part of the ceiling collapsed on a subway platform at Borough Hall station in June 2018, Adams urged the governor and state lawmakers to convene a special session and pass a plan to repair 150 stations and modernize signals. He also joined transit leaders in September 2019 to demand that the MTA reverse a series of bus service cuts.

“He has a record of standing up for riders,” Danny Pearlstein, policy and communications director at Riders Alliance, a transit advocacy group, said. “He did well in the lowest-income areas of the city, where few people drive, as well as outer-borough fringes, where many more people drive. There’s a tremendous number of transit riders in his coalition and I think he’s keenly aware of that.”

But, Adams can also be dismissive of the needs of cyclists and pedestrians. He and his staff have repeatedly parked on a public plaza at Borough Hall, limiting where pedestrians can walk. And his mayoral campaign attacked Democratic rival Andrew Yang for citing parking placard abuse and double parking as significant campaign issues.

Any delay in congestion pricing would give an incoming Adams administration time to get up to speed on the specifics of the proposal and coordinate its implementation across multiple government agencies. He may also be able to remake multiple city corridors once congestion pricing begins and traffic patterns change.

Jon Orcutt, a former Department of Transportation adviser under Mayor Michael Bloomberg, believes Adams will be able to expand the city’s network of busways and bike lanes, while also carving out more space for pedestrian plazas and small parks. That could even include removing sections of the Brooklyn-Queens Expressway and Prospect Expressway along the Brooklyn waterfront.

“These things are all going to work together in some way and we need to be ahead of it,” Orcutt, a spokesman for the cycling advocacy group Bike New York, said. “You don’t throw the switch twice on congestion pricing. It would be a huge, historical disaster not to take advantage of the one-time drop in traffic in order to reclaim space in NYC and make the city better, safer, and more competitive.”