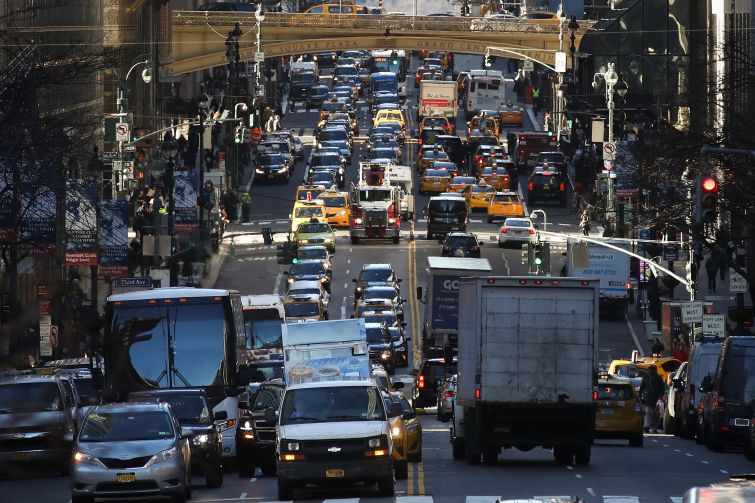 The long-delayed implementation of congestion pricing in Manhattan took a step forward Wednesday when the Metropolitan Transportation Authority appointed a panel of five experts — mostly from the real estate industry — to move the plan along.

Only two of the 22 MTA board members voted against approving a five-member advisory body for the program, formally known as the Central Business District Tolling Program, despite its integral role in the agency’s $55 billion capital plan.

Recommendations for the plan, which has been making its way through the state and federal bureaucratic processes since it was introduced by disgraced Gov. Andrew Cuomo in 2017, will be hashed out by the group known as the Traffic Mobility Review Board. Broadly speaking, congestion pricing will toll motorists heading into Manhattan below 60th Street.

“We have overcome huge hurdles and are ready for public comment and a second phase of hearings once the [Federal Highway Administration] shortly releases the [environmental assessment] document,” MTA chair Janno Lieber said in a statement. “And the experienced, talented and diverse group we have selected to serve on the state-mandated Traffic Mobility Review Board will be there to factor it all into their deliberations about pricing, discounts and exemptions.”

Lieber said the MTA hopes to have the plan approved by the federal government by the end of 2022 and implemented by the end of 2023 or early 2024. The funds will help the agency close a deficit projected at $2.5 billion within two years and possibly avoid a fare hike for straphangers.

The board will be led by Carl Weisbrod, the former head of the New York City Department of City Planning and current senior adviser at HR&A Advisors. Other members are Real Estate Board of New York President Emeritus John Banks, Regional Plan Association chair and RXR CEO Scott Rechler, Velez Organization President Elizabeth Velez, and Kathryn Wylde, the president and CEO of the Partnership for New York City.

Recommendations expected to come from the Traffic Mobility Review Board include toll rates for drivers, credits, discounts and exemptions, with the aim to raise no less than $15 billion for the MTA through congestion pricing. Members will review traffic patterns, traffic mitigation measures, operating costs, vehicle types, public impact, public safety, peak and off-peak rates, and the environmental impacts of the plan, according to the MTA.

“The MTA is facing a dire financial crisis. Albany cannot afford any delay to stave off the worst impacts on New Yorkers, including severe service cuts and fare hikes. The governor and the Legislature must act before it is too late,” Renae Reynolds, executive director of advocacy group Tri-State Transportation Campaign, said in a statement. “We need congestion pricing and new funding streams to keep the agency afloat. Every dollar Albany invests in public transit is a dollar spent fighting climate change and averting an MTA death spiral.”

Congestion pricing, however, has not been approved as required by the Federal Highway Administration, which provided the criteria for the environmental assessment to the MTA.