'The level of support in Manhattan for a casino ranges from strongly opposed to nuclear opposition.' 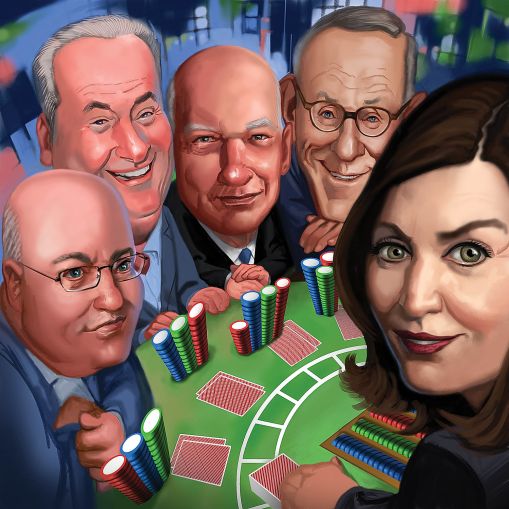 The push to build a casino in Manhattan — even with big names like Vornado, Related and SL Green involved — faces some long odds. Illustration: Richard Clark

Gaming operators, developers and hedge fund behemoths are going all in for a chance to run a new casino in the heart of Manhattan — but it may not be in the cards.

Ever since the New York State Legislature legalized the expansion of three new downstate casino licenses in the state budget in April, high-rolling property owners have been courting gaming operators in a high-stakes effort to win a bid.

Several sites in Queens, Brooklyn, Staten Island and Nassau County have been floated as potential locations for a new casino, but the promised land to gaming industry veterans remains Manhattan.

“The market is going to be huge,” Marcus Threats, a senior associate with Marcus & Millichap’s hospitality practice, said. “Think about the close proximity of the number of people with an average income twice the national average. They’re going to come out of the woodwork for this license.”

The competition to land a gaming venue is only starting to heat up. In early October, the New York State Gaming Commission will appoint a three-member panel called a Gaming Facility Location Board, which will then have 90 days to issue a request for casino license applications.

The proposals are expected to be chosen next year, but there’s a catch. To maintain their hot hand, each project must secure the equivalent of a royal flush — or four out of six votes from a Community Advisory Council (CAC) made up of appointees of the governor, the mayor, the borough president and the district’s state Assembly, state Senate, and City Council representatives. That measure, which was added to the state budget, could guarantee Manhattan projects will be dealt a bad hand if local officials band together, stakeholders said.

“I am not a fan of casinos or gambling; I’ve voted against every gambling bill I’ve seen in Albany,” said state Sen. Liz Krueger, whose Manhattan district will include Times Square and Penn Station by January and who will appoint a CAC member. “It’s not obvious to me there’s a path. Many electeds from Manhattan and many constituents also see no place for a casino in Manhattan.”

Two existing slot parlor owners have a leg up on other bids, multiple sources said. The Genting Group, which owns Resorts World Casino and Aqueduct Racetrack in Ozone Park, Queens, and opened a Hyatt Regency hotel on its site last August, wants to upgrade its “racino” to include table games with live dealers. So does VICI Properties, which acquired Empire City Casino in Yonkers from MGM last year for $17.2 billion. (MGM Resorts International is still operating the casino.)

“Everybody knows the hardest part of the process is getting local communities to support the idea of getting a casino in their community, which is why Aqueduct and Yonkers are almost guaranteed to get the license because there’ll be no local objection,” said Jeffrey Gural, chairman of GFP Real Estate and owner of the Tioga Downs Casino in upstate New York. “They have all the stuff a casino will offer and they can convert over very quickly to a casino. They don’t have to build anything.”

The third license remains up for grabs.

The likely bidders include some of the most prominent names in real estate, and Midtown Manhattan and its surrounding area hold particular promise for several commercial developers.

Vornado Realty Trust Chairman Steven Roth has long pitched turning one of its holdings near Herald Square into an integrated resort.

“Manhattan has, by far, the largest number of hotel rooms, restaurants, museums, tourist attractions, and the region’s transportation network was designed with Manhattan as its hub,” Roth wrote in a letter to investors in 2021. “We have heard the chatter and have been approached.”

Several of Vornado’s neighbors have looked into converting nearby properties they control. Morris Bailey, who owns Atlantic City’s first casino hotel, is looking into building a casino on the former McAlpin Hotel site at Broadway and 34th Street. And L&L Holding Company is contemplating a gaming facility within its 46-story Times Square tower on 47th Street that will also include the 108-year-old Palace Theatre, The New York Times reported.

Other developers are already hooking up with casino operators and putting their cards on the table. SL Green Realty and Hard Rock Cafe representatives held meetings with elected officials this year to push a plan to put a casino in 1515 Broadway, although the hospitality company now appears to be more inclined to back other projects. Hard Rock Chairman Jim Allen said the company identified three potential sites for a casino, although it would not include the Hard Rock hotel on West 48th Street that opened in May.

Then there’s Related Companies, whose representatives met with City Hall officials to chew over the company’s proposal to build a casino over rail yards on the edge of Hudson Yards on Manhattan’s far West Side. Related Chairman Stephen Ross offered to MSG Entertainment’s James Dolan to move Madison Square Garden to form a new entertainment sports complex, although Dolan rebuffed him. A Related spokesman confirmed the company was interested in a casino license and is exploring options for a bid.

Meanwhile other developers are stepping up to plug their sites in the outer boroughs.

Both Thor Equities’s Joseph Sitt and Red Apple Group CEO John Catsimatidis have floated erecting casinos along the Coney Island waterfront. Casino operators have discussed adding a gaming facility to the Belmont Park parking lot in Nassau County. And public officials have not ruled out dropping a casino in Staten Island, perhaps near the St. George Ferry Terminal.

Finally, there’s Mets owner Steve Cohen. The hedge fund manager has been touting Citi Field’s parking lot as a potential casino site to city officials and has already met with representatives from Hard Rock and the Las Vegas Sands to find a casino partner. But Cohen has also emphasized broader plans to build hiking trails near Flushing Creek and redevelop the area around Willets Point, an industrial area filled with auto body repair shops that has long been on mayoral to-do lists.

“Willets Point is not heavily populated, is easy to get to with mass transit, and we know they can handle big crowds because baseball and tennis are there,” Gural said. “If I were a betting man, that would be the favorite.”

Developers may dream of blackjack tables and multimillion-dollar poker tournaments in Times Square, but the odds that a casino would wind up anywhere in Manhattan are slim to none, according to several stakeholders.

“The level of support in Manhattan for a casino ranges from strongly opposed to nuclear opposition,” said one operative familiar with the licensing process. “It’s a default Manhattan carveout.”

Borough President Mark Levine, City Councilman Erik Bottcher and state Sen. Brad Hoylman are all against setting a casino in Midtown, as are Congress members Jerrold Nadler and Carolyn Maloney. So are the area’s top entertainment and civic institutions, including the Broadway League and the Times Square Alliance, never mind several business owners, officials said.

“I haven’t heard from any constituents who want a casino,” Hoylman said. “We know that poor and vulnerable New Yorkers are often targeted by casinos. They add traffic, noise and congestion, and they affect the quality of life.”

Krueger said she has been turned off by the intense pressure from gaming industry lobbyists who have demanded tax breaks when their revenues fall short of their forecasts.

“Our existing casinos, with online gaming, say, ‘We’re not making enough, we have to lower our taxes.’ Give me a break,” Krueger said. “If in theory we allow gambling because we get tax revenue from it, people may not be spending their money in other areas where we get tax money from.”

Conditions may be more favorable in Queens than in Manhattan, but Cohen still has his work cut out for him.

In January, Cohen hosted Mayor Eric Adams and Adams’ chief of staff Frank Carone in his executive suite at Citi Field to sell them on the idea of a gaming complex in Willets Point, Bloomberg reported. Last year, Cohen donated $2 million to a political action committee to support Adams’ mayoral campaign and made an in-kind donation of $1,935 to Gov. Kathy Hochul’s gubernatorial campaign. He also cut a $67,100 check to Hochul while his wife added the maximum $69,700 contribution. (For good measure, casino hopefuls Stephen Ross and Steve Roth each gave $69,700 to Hochul.)

Cohen’s lobbyists have also met with Queens elected officials, including Borough President Donovan Richards and state Sen. Jessica Ramos. Richards told the New York Post he wants to see “investment and job development” in the Willets Point area in any proposal. Both told the Post they had not seen any plans yet.

A Queens- or Brooklyn-based proposal would also likely have the tacit backing of the powerful Hotel Trades Council, which lobbied Albany for months to issue new casino licenses. The union is seeking to find work for thousands of its members who are still unemployed after the pandemic shuttered dozens of hotels, and an outer-borough casino site with a separate hotel offers the likelihood of more unionized jobs than a vertical casino tower in Manhattan, sources familiar with union leaders’ thinking said.

The mayor is also believed to favor a Queens site, which would give him the ability to build a legacy project that includes a soccer stadium, a hotel, a school and a convention center, sources said. Hochul’s preference is unclear.

They may not want to get too involved. The last time casino licenses were given out a dozen years ago, FBI agents targeted several legislators for their roles in rigging bids for the Aqueduct racetrack, which Genting later won. State Inspector General Joseph Fisch referred his findings to the U.S. attorney’s office, which chose not to indict anyone, although four state senators involved were later arrested on other charges.

One political operative warned the governor that she should stay as far away from anything to do with casinos as possible.

“I haven’t seen Hochul play real politics yet. This is one of these areas where a lot of money is floating around,” the operative said. “Her job is to let the gaming commission do its job. If I’m her, I’m getting as far away from it as I can once I do my part of the job.”

Update: This story originally said that Steven Cohen donated $1.9 million to Gov. Hochul’s campaign but the sum was actually $1,935.