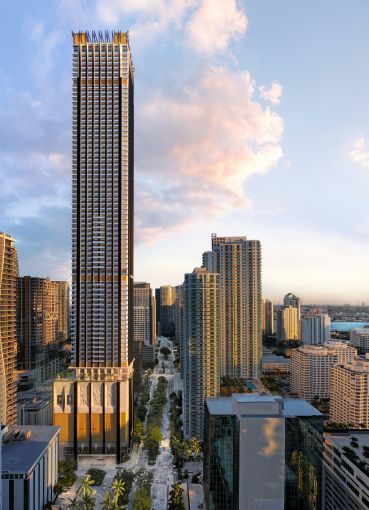 The firm, behind celebrity hot spots Carbone and ZZ’s Club, among others, was slated to develop an ultra-luxurious condo and hotel tower in Miami’s financial district in partnership with Michael Stern’s JDS Development Group. They announced the joint venture last December.

Despite publicly releasing renderings for the projects and touting the clubs and restaurants that MFG would operate as selling points, some of which would be exclusive to the 90-story development, the two companies hadn’t signed a contract, per anonymous sources.

“In mutual alignment, Major Food Group and JDS Development Group have come to the decision not to proceed in their collaboration on the MAJOR tower,” according to a joint statement provided to TRD.

JDS will continue developing the project, now called 888 since it’s located at 888 Brickell Avenue, adjacent to SE 10th Street. The 1,049-foot-tall skyscraper, which could become one of Miami’s tallest buildings, is set to include 259 condos, a hotel and 115,000 square feet for amenities. Construction hasn’t yet commenced.

After capturing the Miami hospitality scene with its Carbone restaurant, which became the hottest reservation in town, the condo venture was set to mark MFG’s ascension into a new domain: real estate.

Despite the setback, MFG is continuing to expand in Miami. It’s set to open two Sadelle’s locations, one inside a Kith store in the Design District and another in Miami Beach. Earlier this year, it opened its Dirty French bistro in Brickell.

Besides the Brickell condo, JDS, best known for constructing so-called supertall residential skyscrapers in New York, is developing a mixed-use tower across the Miami district. The New York-based developer secured an $86 million loan for the 64-story project last month.

Representatives for JDS and MFG did not immediately respond to Commercial Observer’s request for comment.