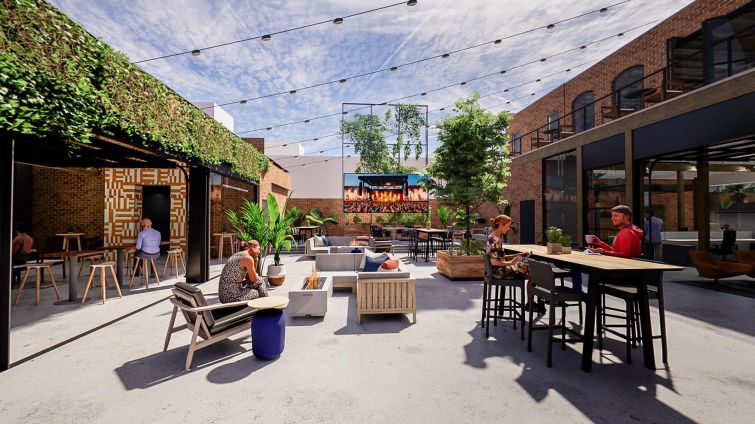 OUTFRONT Media, a real estate investment trust and one of the largest outdoor advertising companies in the country, is moving its Los Angeles headquarters to an office in Hollywood.

The company, which operates billboards and transit campaigns, signed a 34,000-square-foot lease to take the entire building at 1520 North Cahuenga Boulevard which was recently vacated by Urban Outfitters and Umami Burger. A joint venture between Santa Monica-based Artisan Ventures and Chicago-based Walton Street Capital owns the property.

The building is located in Hollywood’s fast-developing “Vinyl District,” which has seen high-end restaurants and bars open the past couple of years, including Grandmaster Recording and Mother Wolf, along with hotel destinations such as Dream Hotel, and the Thompson and Tommie hotels (which also have high-end restaurants).

JLL announced the deal and represented the landlords on the lease.

“We are seeing continued demand for freestanding campus environments, including the adaptive reuse of retail and industrial buildings into office spaces where creative tenants can build a culture, brand and vibe,” JLL’s Nicole Mihalka said in a statement. “With excellent visibility and ample outdoor space to work and entertain, this is the perfect location for a dynamic tenant in Hollywood’s vibrant Vinyl District.”

L.A.’s office market is struggling amid new spikes in coronavirus cases, as well as rising inflation and interest rates. According to a second quarter office report, more than a quarter of the office space in Hollywood is either vacant, available for sublease, or under a soon-to-expire lease agreement. The submarket’s average asking rate is at $4.77 per square foot per month, ahead of the county’s average of $3.87 per square foot.

Walton Street is focused on developing and acquiring office, hotel, retail, industrial, multifamily, senior and student housing and gaming, among other assets, and the firm has been active in Southern California. At the start of the year, Walton Street acquired a 182,630-square-foot industrial building in the Inland Empire for $70 million, and, in 2020, the firm bought an industrial building in Ventura County and one in L.A. County for a combined $88 million.