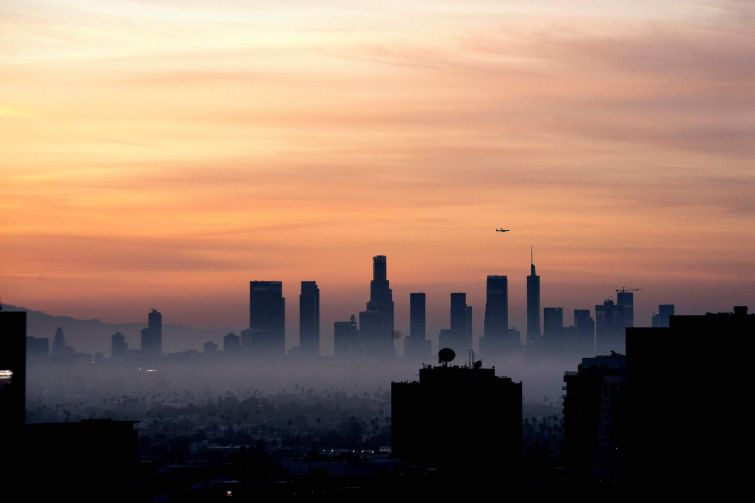 A plane flies over the Los Angeles, California, skyline at sunrise. STEFANI REYNOLDS/AFP via Getty Images

Savills’ report on the past three months found “deals falling out of contract by the end of the quarter (mostly from the technology sector) and other active requirements now on hold.” Total office leasing for the past three months was just under 2.8 million square feet, which is 20 percent less than the previous quarter, and down from the 3.1 million in the same quarter last year, according to the report.

Seasonal slowdown could be partially to blame as deals tend to spike towards the end of the year, but Savills mostly cites risk and uncertainty brought on by inflation.

The report measures office availability, which is the sum of vacant space as well as expiring lease terms in Los Angeles. Office availability stood at 25.1 percent at the end of the second quarter. The overall average asking rent also decreased slightly from $3.88 per square foot per month in the first  quarter to $3.87 per square foot in the second quarter.

Amazon led leasing with the largest deal of the second quarter: the 207,000-square-foot agreement at the Water Garden in Santa Monica. Forever 21 signed for nearly 163,000 square feet at Brookfield’s California Market Center downtown, and First Republic Bank signed for more than 156,000 square feet in Century City.

Also, TCW Group left the tower with its name on the top for a 129,317-square-foot property at 515 South Flower Street downtown. Dine Brands signed for 92,670 square feet in Pasadena, and Blue Shield signed for 71,753 square feet in Long Beach.

Santa Monica leads the region in average asking rent by a nickel with $5.86 per square foot per month. The next most-expensive submarkets are Century City, Beverly Hills, Playa Vista and West Hollywood. The overall average for the second quarter was $3.87 per square foot.