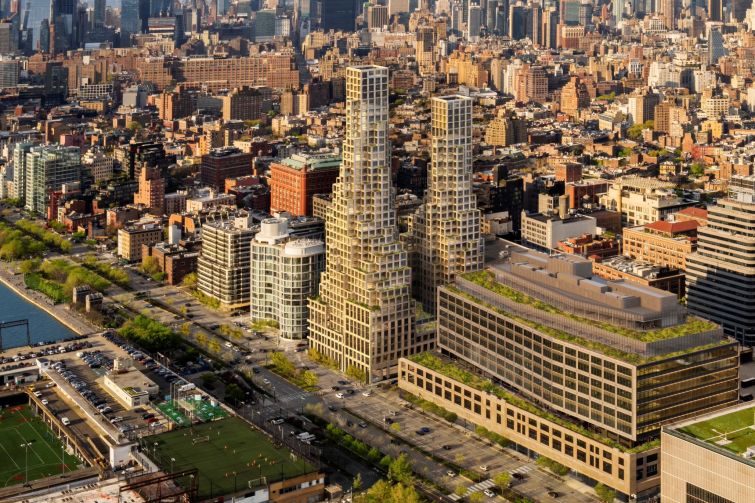 A rendering for the residential towers planned at 570 Washington Street. Photo: CookFox Architects

The joint venture behind a more than $1 billion luxury condo slated for an empty West Village lot nabbed a $322 million debt package and raised more than $400 million of equity for the long-awaited project, Commercial Observer has learned.

Blackstone supplied the loan in a deal that closed late Friday afternoon to finance a portion of the land acquisition and pre-development work at 570 Washington Street. The JV — composed of developers Zeckendorf Development, Atlas Capital Group and The Baupost Group — is planning a two-tower condominium development rising 450 feet and encompassing a full city block near Google’s St. John’s Terminal campus.

Newmark’s Dustin Stolly and Jordan Roeschlaub arranged the debt financing on the development, which is expected to see total future capitalization in excess of $1.25 billion. The brokerage also facilitated the JV between the trio with over $400 million of equity, underscoring Newmark’s continued push to grow its equity business by focusing heavily on large JV deals led by the firm’s New York office.

“We are pleased to support this sponsor group through the first stage of this development,” Michael Eglit, head of U.S. originations for Blackstone Real Estate Debt Strategies, said in a statement. “They are well positioned to deliver a unique, high-quality project that will benefit from the continued growth of the west side of Manhattan. We look forward to the completion of this project and to our continued investment activity here in New York City.”

The 570 Washington Street project has been subject to a lengthy rezoning process that began in 2013. Atlas led the rezoning for the entire St. John’s Terminal site of nearly four city blocks with the former ownership group paying $100 million to the Hudson River Park Trust in exchange for unused air rights. The overall 1.3-acre development site permits over 600,000 square feet of predominantly residential space.

Zeckendorf and Atlas both contracted this past February to purchase the ownership interests of 570 Washington from Westbrook Partners for $350 million. The Baupost Group joined the JV on Friday.

The Baupost Group, a Boston-based investment manager, manages roughly $29 billion across asset classes. It was one of the sellers of the Hudson Commons office building in late 2021, trading it for more than $1 billion in the biggest New York investment sale of the pandemic to that point.

Representatives for Atlas, The Baupost Group and Newmark did not immediately return requests for comment.  Zeckendorf declined to comment.