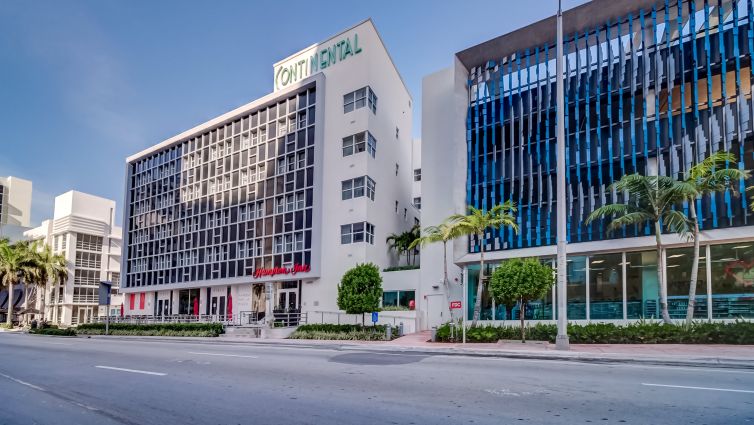 Hampton Inn by Hilton at The Continental in Miami Beach. Photo: Pebb Capital

The Hampton Inn by Hilton at The Continental in Miami Beach, a Miami Modern-style property built in 1948, features 100 rooms and a pool. Located at 4000 Collins Avenue, just one block from the beach, the six-story hotel sits within a strip known for housing other hotels, such as the iconic Fontainebleau resort, in the Mid-Beach neighborhood.

The joint venture spent $25 million renovating the Hilton hotel after buying it for an undisclosed amount in 2016, said a spokesperson for Pebb. While property records did not record a sale, they show Pebb nabbing loans, totaling $44 million, from Acore Capital Mortgage in 2016.

The recent sale — to an undisclosed buyer — comes a little over a month after Pebb sold the 8,896-square-foot retail portion of the property, entirely leased to CVS Pharmacy for over 25 years, to Cove Capital Investments for $17.73 million. (Pebb’s representative declined to divulge the buyer’s identity.)

It also comes just a month after a hotel across the street, the 339-room Confidante Miami Beach, sold for $232 million.

These trades are examples of investors’ appetite for hotel properties as the hospitality industry bounces back from the pandemic.

Miami’s revenue per available room, a metric used to calculate a hotel’s performance, grew by 22.8 percent between 2019 and 2022 — the most of any U.S. market, according to JLL.

The hotel’s previous owners drew ire from preservationists, who accused them of intentionally letting the property fall into disrepair after a 2017 fire, in hopes of tearing it down and building something new.