Preservations and Politicians Fight to Save Landmarked Upper West Side Church 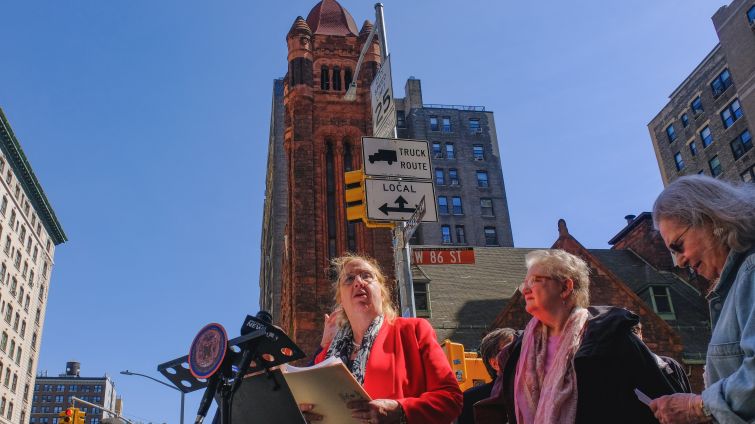 Councilwoman Gale Brewer at a May 5 rally to save the West-Park Presbyterian Church in the Upper West Side. Photo: Mark Hallum

An Upper West Side congregation seeking to repeal the landmark designation on their 19th-century church has residents and politicians on edge.

Councilmember Gale Brewer, Congressman Jerry Nadler and a small crowd of skeptical preservationists accused the West-Park Presbyterian Church of intentionally neglecting the structure dating to the 1880s and inflating the estimated cost of renovations.

The congregation, which does not even have a pastor, previously filed a hardship application with the Landmarks Preservation Commission (LPC) so it can ditch its landmark status and  sell the property to a developer, who plans to replace it with a residential tower.

“The Presbyterian Church is the owner of the landmark, and the owner of the landmark under landmark law should be taking care of the building. They did not, that’s a fact,” Brewer said during a Thursday press conference. “Yes, the building needs work, but what we want is for the church to sell it to a nonprofit or somebody who’s going to preserve it, and we will be able to raise the money.”

The church estimated that a full renovation of the inside and the facade would cost upward of $50 million, but the local electeds and preservationists cried foul and said the cost will be more like $20 million. On top of that, Brewer and the Center at West Park, a nonprofit that rents space from the congregation, said the congregation previously refused offers of help to fund the renovations.

Roger Leaf, chair of the West-Park Presbyterian Church’s Administrative Commission, denied that the church’s current state is a matter of willful neglect on the part of the congregation, adding that efforts to raise funds for repairs have yielded paltry results. Even an offer by Center at West Park to buy the property outright fell short, he said.

“The $50 million is a real number. The $20 million is unimaginably low given the condition of the building,” Leaf told Commercial Observer. “There’s over 100 pages of documentation in the hardship application that supports the condition issues in the building. Many are structural as well as the facade.

“Only a fraction of the money needed was raised,” he added. “There were many promises made by elected officials and community groups, how if the building were landmarked there would be funds available, and those funds have never materialized.”

Zachary Tomlinson, who runs the Center at Park West, said his organization had done its own appraisal of the building, valuing it at no more than $5 million. They offered that amount to the congregations but were turned down.

“The actual cost of restoring the facade is actually only $18 million. The other $30 million and change is an added cost and a $15 million contingency, so they grossly inflated the cost,” Tomlinson said. “This basic minimum scope of conservation of the facade and roof replacements is from 2019, so there’s a little bit of inflation to be taken into account. But if you look at the totals here, the actual cost is only $3 million, and with additional indirect costs it’s under $5 million.”

Leaf said there has never been a “serious offer” to buy the church that would have been acceptable to the congregation and the Presbytery of New York City, the organization in charge of Presbyterian parishes across the city.

“We have an obligation to do what’s in the best interest of the church,” Leaf said. “We love this building. It’s been the spiritual home of the church for 140 years. This is not something that we took lightly. … This was the only way that we could see a plan forward where the church could end up with space that we could use.”

The church at 165 West 86th Street was built in 1991 but has fallen into a decrepit state over the years. The New York City Department of Buildings deemed the facade unsafe two decades ago, mandating a sidewalk shed be erected around the perimeter to protect pedestrians from crumbling sandstone.

With a shrinking bank account and congregations (the church only has 12 parishioners) West-Park wants to ditch its landmark status so Alchemy Properties can buy the site. Alchemy would raze the church to make way for a residential tower with market-rate housing and a 10,000-square-foot space where the West-Park’s congregation can continue to worship.

In exchange for development rights and the space, the church would get $8.8 million from Alchemy to outfit the space, which will be bare-bones upon delivery, on top of the purchase price, according to Leaf. Alchemy has not released information about the number of units or the pricing for the residential portion of the development.

However, Brewer worked to have the church designated a landmark by the LPC in 2010 and doesn’t want to see her efforts go down the drain — especially considering that its designation received only two nay votes by the New York City Council.

The congregation’s hardship request is scheduled to go before Manhattan Community Board 7 on Thursday for an advisory vote before heading to the LPC for a decision.

Of the 19 hardship applications filed to LPC in the agency’s 60-year history, 13 have been approved. 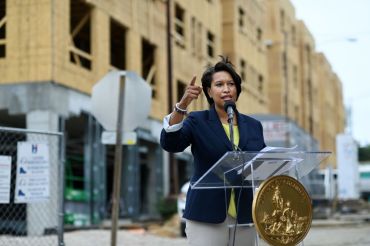