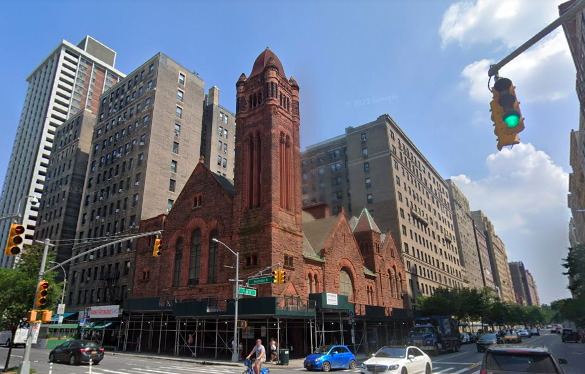 These Upper West Side Christians are faced with an unlikely sacrifice.

Down to its last dollar, the West-Park Presbyterian Church has painstakingly come to the decision to appeal its previous landmark designation in order to sell the 140-year-old church to a developer, which plans to raze the historic property and build an apartment building in its wake.

The 12-person congregation has no pastor and faces the obligation of paying $50 million to bring the crumbling structure at 165 West 86th Street into a state of good repair.

Instead, the Presbytery of New York City — the body in charge of Presbyterian parishes in all five boroughs — unanimously approved the congregation’s request on Monday night to redevelop the property with Alchemy Properties with a market-rate housing tower, along with a 10,000-square-foot worship space, for West-Park Presbyterian Church to continue.

The church and Alchemy have come to a purchase and sale agreement with Alchemy Properties that is contingent on demolition.

But the 2010 designation by the New York City Landmark Preservation Commission (LPC) — made against the wishes of the congregation, which was strapped for cash then too — remains a hurdle.

“It has no resources left to maintain the building at all and, because it’s a designated landmark and because of the condition it’s in, it’s unclear if we were to just try and sell the building that we would even be able to find a buyer,” Roger Leaf, chair of the West-Park Presbyterian Church’s Administrative Commission, told Commercial Observer. “But if we were in a position to sell the building and not get any real money for it … the likely outcome — the inevitable outcome — would be that the congregation would have to disband.”

In exchange for development rights and the space, the church would get $8.8 million from Alchemy to outfit the space, which will be bare-bones upon delivery, on top of the purchase price, according to Leaf. Alchemy — which declined to comment — has not released information about the number of units or the pricing for the residential portion of the development.

“The LPC has always been sensitive to the cost and effort of maintaining historic buildings, and we work closely with owners to find solutions that are realistic and achievable,” the LPC said in a statement. “The landmarks law does contain a hardship provision for when an owner feels like they cannot sustain the landmark under the law, but these applications are very rare.”

Evidence that the church poses a danger not only to occupants, but also to bystanders, is apparent on the surface. The New York City Department of Buildings (DOB) deemed the facade unsafe two decades ago, mandating a sidewalk shed be erected around the perimeter to protect pedestrians from crumbling sandstone. That sidewalk shed has been there ever since, acting as a haven for unhoused New Yorkers. In the community center, the bricks of a wall can be seen parting from the rafters, disintegrating from the top down.

The congregation recently had to raise $75,000, borrowing from the Presbytery, to fix an exterior wall that was ready to collapse.

Leaf and attorney Valerie Campbell followed the Presbytery’s approval of the sale by officially filing a hardship application with the LPC on Tuesday to remove its landmark designation.

There have only been about 19 hardship applications filed with the commission since its creation in 1965; the agency granted 13, denied four and didn’t act on two, according to the LPC.

“We don’t think it’s going to be a precedent for every struggling church, and there certainly are a lot of churches that are struggling with building maintenance,” Campbell said.

The application would need to go before a public hearing as well as get an advisory nod from Manhattan Community Board 7 before the LPC can approve or deny the application.

The West-Park Presbyterian Church was designated a landmark in 2010 and is regarded by the LPC as one of the best examples of a Romanesque Revival-style religious structure in New York City. The roots of the church go even deeper on the Upper West Side.

It was founded in 1852 as the 84th Street Presbyterian Church and started as a humble wooden chapel on West 84th Street and West End Avenue. The congregation would go on to purchase the land where the church sits now in 1882, and architect Leopold Eidlitz was commissioned to design a small brick chapel on the eastern end of the site, according to LPC records.

As the population of the Upper West Side exploded during the 1880s, Henry Kilburn was hired to design a newer, larger church to accommodate the influx of worshippers. By 1911, the Park Presbyterian Church merged with the West-Presbyterian Church, which was founded in 1829, and became the congregation as it is known today.

But, over the years, the historic church has started to fall into a decrepit state. The DOB’s website has three pages of mostly active violations on the property dating as far back as 1993 and ranging from boiler issues to failed elevator inspector. One boiler-related violation from 1988 was only resolved in 2011 and another for “failure to maintain the building,” cost the parish $6,250 in fines.

Now, with a shrinking congregation and bank account, the church asks the question: save the church, or dissolve a congregation that technically has close to two centuries of history itself in New York City.

“If we were in a position to [just] sell the building, and not get any real money for it, then the congregation, which is dwindling in the numbers and no longer has a pastor, would also no longer have a place for worship,” Leaf said.