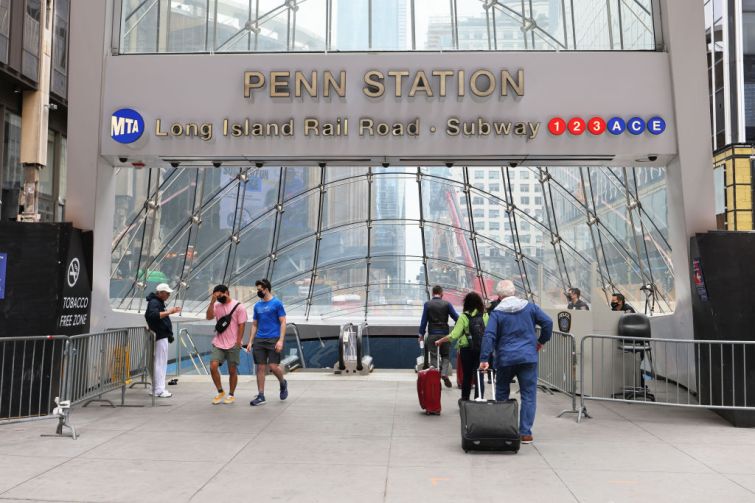 The state’s plan to redevelop Pennsylvania Station might be headed off track, according to a new report from the Independent Budget Office (IBO).

New York State will need between $8 billion and $10 billion to improve the much-loathed station below Madison Square Garden, which it plans to partly fund by building new Class A office towers around the transit hub. But all of that money may not materialize given a lack of demand for office space amid the COVID-19 pandemic and sparse details on how the project will be funded by the state, which could lead taxpayers to foot the bill, according to the IBO.

“There’s a lot of information missing that you would want to have before you commit to moving ahead with this particular plan,” George Sweeting, IBO’s acting director, told Commercial Observer. “It’s not whether this project is good or bad. … We’d like to have more information about the specifics of the plan. How much is it actually going to cost? How much are they going to finance it? How are these payments structured?”

The plan to redevelop Penn Station, conceived by disgraced former Gov. Andrew Cuomo and modified by Gov. Kathy Hochul, outlined how the Empire State Development Corporation would construct up to 10 new buildings around Penn Station from West 34th to West 30th streets between Ninth Avenue and Avenue of the Americas.

As part of the proposal, ESD would let private developers build at a greater density than the city normally allows and bypass its land-use review process, directing property tax revenue and fees to the ESD rather than the city to help finance the redevelopment of the station. The ESD would collect payments in lieu of taxes (PILOT) and fees for the rights to build those towers, mostly from Vornado Realty Trust, which owns the majority of the buildings near the station.

While the IBO questioned the state agency’s lack of a firm budget or debt structure, the ESD said it would have that information before it presents a final plan to its board in the next two months.

“When we come back with our final project plan, I think the most important thing is that we will have an agreement with the city on any kind of PILOT structure or things that will impact city taxes,” said Holly Leicht, an adviser on the Penn Station-area project at the ESD. “We’re not going to bring it to our board until we have that agreement in place.”

Until the buildings are completed and the ESD can collect that revenue and fees, ESD will fund New York’s share of transit improvements through bond or debt financing plus $1.3 billion in capital funding. The fees and PILOT would repay that debt — though PILOT funding has been a more controversial method of financing after it left New York City with unfunded costs of expanding the 7 train line to Hudson Yards.

The ESD would also pay New York City the property tax revenue it would have collected on the surrounding buildings had the changes to Penn Station not happened — meaning the city’s tax revenue wouldn’t come up short. The state agency could afford to do so, because of the additional value brought in by allowing the construction of denser buildings, according to Leicht.

“This is not an unprecedented approach,” said Leicht. “There’s going to be an increased tax base in this area so it makes sense from a financial perspective that the tax base, as it increases, helps pay for that extra value — the improvements to Penn Station.”

The IBO raised concerns that those payments might not be enough, especially if the state is reimbursing the city. New York City collected $60 million in property taxes on the eight sites slated for the new development in 2022, a small fraction of the $8 billion to $10 billion needed for the renovations, according to the IBO report. Notably, the tax-exempt Madison Square Garden wouldn’t pay toward the project, eliminating what would be about $43 million in taxes annually that could help fund the renovations.

Further complicating the issue, those new supertall towers won’t be completed until 2044 while the station reconstruction will finish around 2032, leaving a decade when the city could be forced to provide debt service payments until it can collect that money, the report said.

Another potential pitfall is that part of the taxes and fees collected by the ESD will be based on the value of those surrounding office properties, which could fluctuate given the pandemic’s impact on office property values in New York City. If the value of office buildings fall, the revenue used to pay for the station could shrink, said Sweeting. At the same time, the properties surrounding Penn Station could be a hot commodity given the demand for Class A space and the station’s access to the tri-state area, he added. Leicht anticipated that the latter would be more likely.

“What we’re seeing and what developers are seeing is demand for new office space,” Leicht said. “We feel pretty optimistic there’s going to be interest in these sites [which are] shaping the modern office.”

Vornado’s properties would stand to benefit from the plan as it owns the majority of the sites near Penn Station that would be rebuilt and contain some tax-exempt residential housing, thanks to including affordable housing components, according to the report. Vornado’s Steven Roth donated just under $70,000 to Hochul’s reelection campaign, CO reported.

Leicht pushed back on the idea that the project is a handout to real estate, saying that while Vornado stands to gain, so does the public through a better, more accessible station.

“We are not looking to give the private sector anything more than is needed to get the public benefits that we want,” said Leicht. “It’s a balancing act.”

Hochul and Vornado did not immediately respond to requests for comment.

With the PILOT and fee money, the ESD would revamp the underground train station by adding natural light with new skylights, widening the hallways and raising the low ceilings. The changes are desperately needed to improve the passenger experience at the transit hub — which serves hundreds of thousands of commuters and is widely disliked.

“The thing that people find most bewildering about it is how — even though it’s not a super big station — it’s so disjointed and it’s so disorienting,” said Brian Fritsch, the communications director for the Regional Plan Association, a nonprofit focused on the economic health of the New York City metro area which has advocated for Penn Station’s revitalization. “I think what we would love to see is a station where no matter where you got off the train … you knew exactly where you were.”