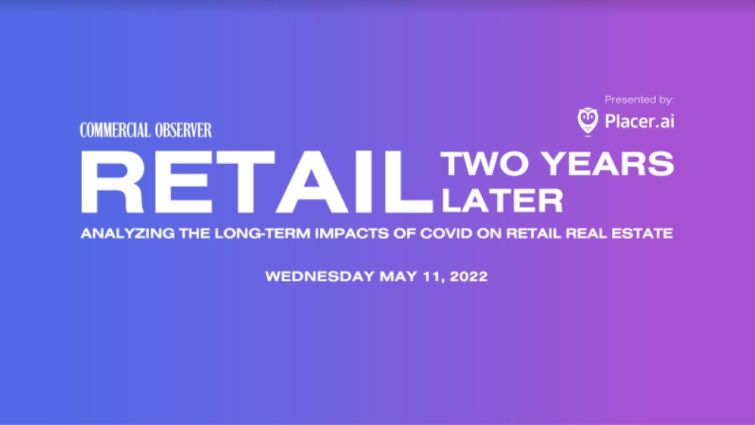 Retail seemed decimated by COVID just two years ago. Today, in some urban locations, retail is now seen as a savior.

This was one of the trends discussed during “Retail, Two Years Later: Analyzing the Long-Term Impacts of COVID on Retail Real Estate,” a May 11 webinar on the current fortunes of retail that was hosted by Commercial Observer Partner Insights and presented by Placer.ai.

The panel featured thoughts from moderator Ethan Chernofsky, vice president of marketing at Placer.ai, and panelists Ashley Robinson, chief strategic adviser at the Seaker Group, and Bret Swango, vice president of workforce analytics in the Americas at Collier’s International.

Chernofsky kicked off the discussion with the observation that while retail was perceived as sharply declining pre-pandemic, it has since shifted into something of a savior for cities.

Robinson noted that geography plays a larger role in evaluating retail now, and in the very survival of the business itself.

Referring to in-person capacity limits caused by COVID, Robinson noted that, by forcing businesses to restrict access, “we were asking businesses to do the opposite of what they’ve been trying to do for years.” But she also said that “anyone still surviving at the end of this two years later has been weather worn and business tested, and is much stronger on the other end.”

Swango, who works extensively within both the retail and industrial categories, noted that, for larger retailers, part of their advantage throughout COVID has been the ability to present both retail shopping space and last-mile fulfillment to customers. Citing Walmart as an example, Swanger said a large retail space can also allow for warehousing space, and therefore successful implementation of last-mile delivery.

“That’s such an interesting take,” said Chernofsky. “Even within the retail space, let alone in separate industrial areas, this idea that I have such a large space that I can dedicate some of it to fulfillment is one of these really interesting trends that I feel is going to gather steam in the next couple of years. It gives an added power to the physical presence of shopping centers, [especially as] less of it is dedicated to actual retail.”

Detouring to a discussion of office space and work from home, Swango noted that COVID work interruptions made companies re-evaluate their relationship to flex space.

“When something like COVID comes through, everybody gives back their flex [space],” Swango said. “That was a knock on what WeWork and others were doing. Companies were saying, ‘Everything’s great when the market’s up, but as soon as things turn back, that flex space will be the first piece [we] give back.’ But the nature of this downturn raised flex space to the top of the spectrum.”

Swango said that over 60 percent of respondents to a Colliers’ survey haven’t even set a return-to-office date. For those that have, only 30 percent are mandating a specific number of days employees must be in the office.

“In times of hyper-uncertainty, you want to make asymmetric bets,” said Swango. “So a lot of our clients are saying, ‘We’re going through this big digital transformation, but we don’t want to make long-term commitments because the market’s changing so quickly.’ Well, you can test the waters with flex space in new markets and you’re not taking on a massive obligation.”

This was followed by a discussion of the effect that flex space and virtual or hybrid working has had on retail. Given the displacement of people from areas where retail thrives, the effect has been considerable.

“One of the major metrics we look at in retail when we’re advising on expansion is: What is the daytime population — how many people are there that are potential consumers in any certain area?” said Robinson. “Major business sectors like New York, San Francisco and Seattle have been hit probably the hardest, [but] you see it across the country. So when we’re looking at these urban locations, we have to not just qualify how COVID has impacted these markets, but quantify that customer base.”

The panel next addressed how the supposed exodus from urban areas early in the pandemic seemed to open up new opportunities for suburban retailers. But with urban areas recovering in many ways beyond what was widely predicated, investment in suburban retail needs to be carefully considered.

“There are so many caveats here,” said Robinson. “If you look strictly at COVID recovery, we see suburban outdoor lifestyle centers or retail nodes doing better, from a COVID-recovery perspective, than urban areas. But if we’re making long-term financial investments based on the next 10 years, then we have to think, what is the consumer potential? We have to quantify that opportunity. And I have yet to see enough evidence for me to advise our clients that they should abandon the urban centers and run out to the ’burbs.”

Robinson also pointed out the importance of evaluating actual spending potential over COVID-recovery numbers. Using Fifth Avenue in Manhattan and Roosevelt Field, the largest shopping mall on Long Island, for comparison, she noted that visitors to Fifth Avenue are down 35 percent compared to pre-COVID, while the mall’s numbers are about even. But in terms of sheer numbers, Fifth Avenue still enjoys around a million more visitors per year. The bottom line is that even through COVID devastation, Fifth Avenue is still the more profitable bet.

The discussion then turned to whether urban retail would return to its previous heights, and what retailers could do to help the process.

Robinson noted that retailers, including restaurateurs, have much to consider here, including access to a limited talent pool that could be complicated by local politics.

“They want to be located in places where they can attract great labor, and oftentimes they want to be in political settings where their employees feel protected,” said Robinson. “Some states are passing laws that can be perceived as threatening toward certain minority groups. That’s something major employers have to consider now.”