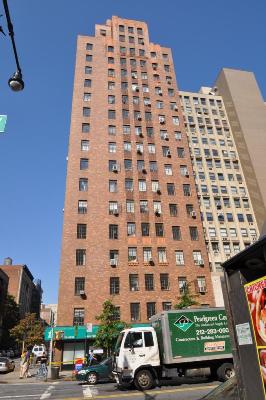 The $42.5 million, or $443,000 per unit, sale has been in the works since December 2021 and part of the SL Green’s long-term plans to consolidate its hefty portfolio toward prime, core assets. SL Green stands to make about $15 million in profit from the 1080 Amsterdam transaction.

But what isn’t a core asset for the seller, is a treasure to A&E.

“We have assembled a diverse multifamily portfolio — from workforce housing acquired from legacy owners in the boroughs to prestigious core Manhattan residences acquired from major institutional investors,” Douglas Eisenberg, executive chairman of A&E, said in a statement. “Even as others were openly despairing about New York City’s future, we continued to quietly execute on our core convictions, locking up high-quality properties at attractive pricing across the city.”

The recent deal comes on the heels of A&E picking up the Upper West Side apartment tower at 140 Riverside Boulevard for $266 million from Sam Zell’s Equity Residential last week and it was in contract to buy a South Brooklyn multifamily portfolio from LeFrak for roughly $250 million on Tuesday.

Marc Sznajderman, Andrew Sasson, Chad Sinsheimer and Justin Bomba from Ackman-Ziff were named as advisers to SL Green in December 2021 while A&E did not use outside brokers.

SL Green did not immediately respond to a request for comment on the closing of the sale.