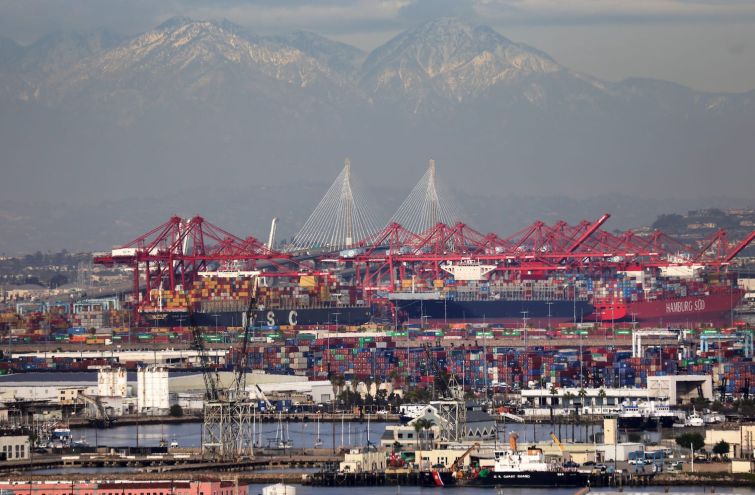 Container ships and at the Port of Los Angeles with the Port of Long Beach in the distance in February 2021. Photo: Mario Tama/Getty Images

Industrial space is still scarce and that means that rents continue to rise across the nation.

The national average rent for industrial space hit $6.45 per square foot after the first two months of this year. That’s a 4.4 percent year-over-year increase, while the vacancy rate reached an average of 5.2 percent for the month of February, according to a new report from CommercialEdge, a real estate data firm.

Nationwide, industrial transaction volume passed $9 billion in the first two months of the year, and a total of 593 million square feet of industrial space was under construction in late February, accounting for 3.5 percent of total inventory. Additionally, developers have added about 45 million square feet to inventory so far this year.

Southern California is still leading the nation after an increase in activity at the ports of Los Angeles and Long Beach. And Orange County recorded the highest 12-month rent increase, at 7 percent.

This brought rents in Orange County to $11.65 per square foot per year. L.A.’s increase was 6.7 percent, and the Inland Empire ticked up about 6.5 percent. This is largely due to lack of available space, according to CommercialEdge.

Areas such as Charlotte, N.C., which saw a 1.1 percent increase; Houston, which ticked up 1.7 percent; and Indianapolis, with a 2.3 percent rise, saw some of the weakest rent growth year over year. Available land meant developers were able to meet the well-documented industrial demand, while driving vacancy levels to new heights.

Last year saw a strong momentum that continues to grow and carry over after a historic 2021. The U.S. reached a record low of 4.4 percent for vacancy rates in the fourth quarter of 2021, a January Savills report found. Average rents rose up to 20 percent in some cities.

The future looks bright for the industrial sector. A report from Cushman & Wakefield shows that ​​rent growth for warehouses and logistics space nationwide could rise by more than 15 percent over the next two years due to the unprecedented demand in e-commerce services established over the course of the pandemic, Commercial Observer reported earlier this week.