Inflation on the other hand? That scares the heck out of it. Seyfarth Shaw’s Ron Gart talks about other conclusions, too, drawn from the law firm’s annual sentiment survey. 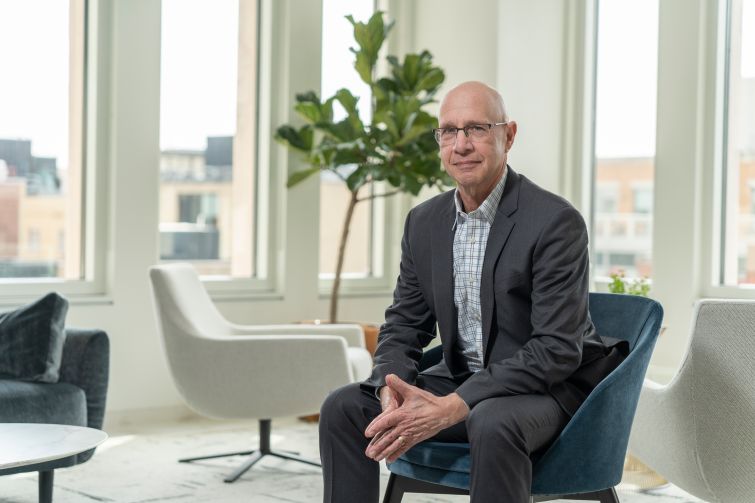 There’s hardly anyone, in any business, who doesn’t want to know what conditions will be like two years from now, five years from now. The word “visionary” seems to be more in use in business than in religion.

Of course, a lot of the events that govern our lives are not ones that were widely predicted. Name me the “visionary” who predicted the COVID-19 crisis.

But that doesn’t stop people from trying. The 900-person law firm Seyfarth Shaw does what it calls its Real Estate Sentiment Survey every year, measuring the attitudes of 128 real estate executives around the country to see what they think of the future. Among their findings, life sciences is the hottest, most in-demand form of commercial space use, and 67 percent project a continuing significant downturn for office markets in central business districts over the next two years.

Ron Gart, a Seyfarth partner and chair of its Washington real estate practice, explained what it all means in an interview with Tenant Talk earlier this month. Here are highlights of it, edited for brevity and clarity.

What is your overall expectation for the commercial real estate market for 2022?

Overwhelmingly, 84 percent say they are very optimistic this year. And that was about the same percentage as last year, and last year was a gangbusters year for real estate. Ukraine was distant on the horizon, and there was a notion of some sort of interest rate increase, and inflation was beginning to be seen, but there was clearly a lot of optimism at the end of January, beginning of February.

One of the things that I was taken by in the report was what it said about tokenization and that it’s, by and large, a nonstarter for real estate or commercial real estate. It made me wonder if all the big tech innovations we’ve heard about, like cryptocurrency, blockchain and the metaverse, as well as tokenization, are going to be real estate events. What do you think about those things, or what the survey says about them?

A lot of these items have been kicking around now for seven to eight years, pretty much. And there was a thought about five years ago about blockchain and how it was going to take over the title industry. And, frankly, there was silence until very recently. Now, I believe, there’ve been a few transactions. [But] 97 percent said it was not part of [their] capital strategy.

And, when you break it down, it makes sense. One, there’s a lack of understanding of what tokenization is, how it works and how it will work in the real estate industry. Then, there’s the lack of regulation, whether it’s cryptocurrency or tokenization and technology. You’re dealing with a real estate industry that is a conservative industry by nature. Things don’t move quickly in real estate. Of all the industries, real estate may be slower in accepting that type of change.

The people who are answering our survey, they are investors and they have multiple sources of capital and debt for that matter, and debt is still relatively cheap, so they don’t feel they need to rely on tokenization at this point.

Do these new industries give investors the comfort that they will fill spaces and be around to pay the bills?

The right answer for now is no one knows. You can’t draw any conclusions, positive or negative. Clearly the proponents of tokenization in real estate believe there is a marketplace, that there is a way to invest, but I don’t think the respondents to our survey yet are prepared to analyze for that back end because the front end is so difficult to get their arms around.

Talk to me a little bit about rising interest rates. It seems that every year for maybe the last 20 years, we’ve been threatened with rising interest rates. This is the year it’s actually happening. And I could see that that would be bad for both investment activity and the leasing of space. (Editor’s note: This interview was conducted just before the Federal Reserve began raising rates.)

On the interest rate front, yes, we see there’s an expectation of three to four increases. So let’s say for the moment that’s about 100 basis points from where we are now. If you go back to 2018 or 2017, I believe the 10-year Treasury rate was about the same as today plus those basis points. And 2017 and 2018 were very fine years to get transactions done.

We don’t think interest rates as projected will have a material impact on decision-making, with one exception. With home mortgages, home purchases and perhaps in commercial [real estate] as well, where there’s a fear of increased interest rates. Brokers will tell you, “Hey, act now, before interest rates are XYZ higher.” So it may accelerate some professional decisions.

So, with that one caveat, which would actually be an accelerator, most folks today are either not terribly concerned or are thinking of a change in investment strategy as a consequence of anticipating an interest rate increase. If it goes to 200 basis points, it might be a different story. Clearly, in our survey, once you get over 100 basis points, that’s when 50 percent say the threshold where they start to get concerned is greater than 100 basis points. We’re still in an incredibly low interest rate environment.

If you go from 0 to 1, that’s a huge percentage increase (actually it’s infinite), but you still have a pretty low rate.

Correct, and any businessperson depending on their source of capital and/or debt, they’ve got lines of credit and, if rates go up, that obviously impacts their decision-making. With remote workers, how do you incorporate those — how much space do you need, the decisions you face today and the space you may have tomorrow — all those are just factors you have to take into account. [Interest rates] are one more factor that you would have had to take into account the last 10 years. As a practical matter, in 2022, we don’t think it will have a dramatic effect.

One of the things that really struck me in the survey was the idea that life sciences and single-family rentals are seen as the most opportunistic sectors in 2022. And I’m just curious how that compares to earlier years.

For us, that assessment has been the rage for three to five years, as a way to invest. That’s been coming under attack a little more than it has because of ESG [pro-environment, social justice and good governance investing] concerns. Also Congress is taking a look at that [single-family rental] sector.

Also, take a look at life sciences, and what we have seen is during this period of COVID, there have been a number of companies that have been able to pursue not only vaccines but other medical design-oriented technologies. That space has seen a major increase in need for additional space. If you are on the landlord side, and you’re thinking about growth prospects, it may not be a law firm anymore. It may not be a lobbying group anymore. But life sciences makes sense because that appears to be a growth industry that will be expanding over the next seven to 10 years. They’re liking the growth and maybe even the endgame, helping public health.

There are corridors, like in the D.C. marketplace and the I-270 corridor out in Maryland, where that has been a primary source of development.

Doesn’t life sciences require an expensive commitment, and once you go with it, there’s no going back? A life sciences company can’t do R&D in the same space as a law firm. I wonder what level of concern there is about that.

I think there is a level of concern, at least two-fold: One is going in, and one is going out. Most of the providers of the laboratories are very concerned about security, for obvious reasons. So they build in protection so that the landlords won’t have access to the laboratory space, and they won’t know what’s going on necessarily in the laboratory space. So, going in, somebody’s got to think through risk tolerance with respect to what is going on in the space, whereas otherwise you would have the ability to inspect on 24 hours’ notice.

And then you have an issue on your exit, in 10 years, or five years, or 15 years. What does that space look like? Can you re-rent the space, or does it have to be a total teardown?

On the question of single-family rentals, this is also a fairly new market. So I’m curious if that poses some concern to investors given that if you have an avid market, you can make the properties financeable, but if you don’t, you pretty much have dead space?

Today, at least, the question is going to be yes, absolutely there are concerns. The rental increase on single-families was something like 14 percent last year. You might have individual units that are unoccupied, and you got a lot of very big players in this area, and they’re well-capitalized, and they got the same operating teams in place, dealing with short-term vacancies. The reality is there is a very, very vibrant market for renting of single-family homes.

It was obviously accelerated during COVID. People wanted more space. They couldn’t necessarily afford a home. Certainly, in the last two and a half to three years, the market has just taken off, but again it was an acceleration of the market that started to some extent with millennials perhaps not having the cash to buy a home. Now, as interest rates increase and mortgage rates increase, that will take some people out of the single-family home market. So if you’re now a family, meaning more than one person, and you can rent space, [but] you can’t buy that home because of the mortgage rates, you just created a greater market for rentals of single-family.

How long that continues, I don’t know. I don’t have a crystal ball.

The other risk factor, if you will, is whether Congress will try to regulate the market in some fashion.

I see that inflation is a top concern for your respondents, topping labor, the supply chain, virus challenges and working from home. Why was that the case? All those other things, they seem fine things to worry about.

Last year COVID-19 was the No. 1 challenge. Our analysis is this: The top three are purely economic issues, and if you go with the thought we’ve been following for years, clearly the fundamentals of the real estate industry are what the industry looks at. COVID took it out of that. It became its own issue.

With COVID receding now, the economic challenges facing our industry, the fundamentals, come to the fore, and that’s inflation, the labor workforce and the supply chain. If you talk with folks in the construction industry, you’re looking at costs increasing 15 to 50 percent. That’s going to affect your decision going in, your bottom line going out and your operations in the middle.

Inflation can be a scary phenomenon. Where does it end? How high does it go? How long does it last? For those of us of a certain generation, back in the `70s, and how it affected our economy for a good 15 years — it’s one of those things, it has an aura about itself. Real estate professionals like to know what the rules are, and they will play by the rules. It’s the unknown that gives real estate professionals the most concern.