With City Mandate Out, NYC Restaurants Left to Decide on Dine-In Vaccine Requirement

It’s up to New York City restaurants now whether they want customers vaccinated. It’s not an easy choice. 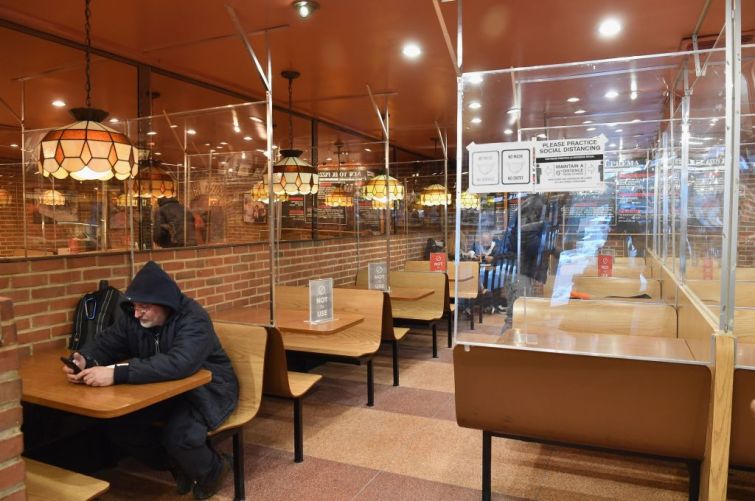 When an unvaccinated customer walked into Miti Miti, one of George Constantinou’s Brooklyn restaurants, intent on joining a group of eight, he had to throw “the customer is always right” out the window.

“Seven people arrived and they had everything — their vaccinations looked good,” Constantinou said. “They ordered a round of drinks and appetizers, and then the eighth person came, and didn’t have proper vaccination proof. It created a little issue at the host stand — the group of seven threatened to leave if we didn’t let the eighth person in.”

But the law is (or, at the time, was) the law, and after refusing to let the eighth person in, the entire party left, costing his restaurant business, Constantinou said. Today, Constantinou’s three restaurants don’t have a vaccine requirement — after Mayor Eric Adams dropped the rule on March 7 for customers of eateries, gyms and indoor concert venues to prove vaccination.

Despite that party of eight and a handful of other incidents, Constantinou supported the vaccine requirement when then-Mayor Bill de Blasio introduced it in early August 2021 and thought, at first, that Adams might have ended it a little too soon. (He felt the same way about Gov. Kathy Hochul’s decision to nix the state mask mandate on Feb. 9, as the city’s COVID-19 cases plummeted from an omicron-induced peak).

For the city’s restaurant owners, vaccine and mask mandates are a high-stakes affair. Enforcing the rules has put a strain on staff and even resulted in an intense protest at the Greenwich Village seafood restaurant Dame — one of a handful of restaurants keeping a vaccine requirement for diners. A mob of about 30 stormed the restaurant on March 8, demanding service despite not having proof of vaccination — or even a reservation, Grub Street reported. The crowd shouted derogatory slurs, compared the vaccination requirement to historic racial segregation in the South, and co-owners Patricia Howard and Ed Szymanski called the police, according to Grub Street. Howard did not respond to a request for comment from Commercial Observer.

But not having a vaccination mandate carries its own risk — the coronavirus. The New York City Health Department found that vaccines prevented one in four residents from contracting COVID-19. Unvaccinated people are 14 times more likely to die from COVID-19, and without the city’s high vaccination rate — 77 percent — the department estimated that an additional 48,000 residents would have died because of the virus. As of March 16, 86 percent of city residents had gotten at least one dose of the coronavirus vaccines. At the start of the vaccination program, the city had distributed about 10.5 million shots, and last week it reached over 17 million shots given, according to city data.

The COVID-19 pandemic and the resulting capacity limits on indoor dining ravaged the restaurant, bar and nightlife industry. Like many restaurant owners, Constantinou, who owns Bogota Latin Bistro, Miti Miti and Medusa, has felt the impact through layoffs. After the pandemic first hit in March 2020, he laid off three-quarters of his employees — from 130 to 30 people. While he was able to re-staff his restaurants to about 110 workers that first COVID summer, he let go five more workers and cut shifts during the January 2022 surge of cases thanks to the omicron variant. Karl Franz Williams, the owner of the cocktail bar 67 Orange Street in Harlem, estimated that his business — which had finally reached pre-pandemic levels by fall 2021 — was cut in half by the omicron wave.

“New York City’s restaurant and nightlife industry has been devastated by COVID-19, and over the past two years these small businesses have endured ever-changing pandemic mandates that have posed significant challenges to their operations, yet they’ve fought hard to persevere, and to feed and serve our city during this time of crisis,” Andrew Rigie, executive director of the New York City Hospitality Alliance, which represents restaurants, said in a statement.

While at least 30 restaurants are keeping a vaccination requirement for patrons, Constantinou decided against it, though he said it was understandable that other eateries are being more cautious. He said the end of the mandate has taken a stressor off his staff, and might be helping out his bottom line — though that could just be due to the sunny spring weather.

“From the middle of February to the end of February I [saw] a good 10 percent increase in business,” Constantinou said. “How much of that was the vaccine mandate being lifted or how much of that was warm weather? It’s tough to say but it’s just the right time. … Especially [after] COVID, we really need our customers.”

“It’s become a lightning rod within communities,” Williams said. “I think people at this point are eager to just be back to pre-pandemic normalcy. Now, what is normal? Will it ever be exactly like that again? No … there will always be a reason to wear a mask. But I think that it’s at a point now where personal liberty and making your own choice about what you do and where you go begins to play more into it.”

Rigie felt that, given the city’s high vaccination rate and fewer coronavirus cases, Adams made the right choice in lifting the vaccination mandate. COVID-19 cases in the city have declined since a spike in January, though a new coronavirus variant is showing troubling signs of spreading. The strain of the virus is an offshoot of omicron, and spreads about 30 percent faster than its predecessor, Gothamist reported.

“We must continue to be safe and smart, and modify mandates as the situation evolves,” Rigie said in a statement. “That’s why it’s with optimism and the careful consideration of many, that we stand in solidarity with Mayor Eric Adams, public health officials and community leaders to lift the city’s temporary proof of vaccination mandate for indoor dining, as an important step in our resilient city’s revival.”

As the city continues to navigate the trials of a global pandemic, life (and business) goes on for restaurateurs like Williams — who, since the mandate was first announced, has gotten married and is expecting another baby. Constantinou and Williams both hoped that the city would dedicate more resources to help restaurants recover from the pandemic, including the city’s popular alcohol-to-go program, which let customers order takeaway spiked drinks.

“I think that there’s now a view, especially with the warmer weather coming in and places opening up, where everyone [thinks] our restaurants are totally fine,” Williams said. “But that’s not the case. There’s still a lot of recovery that needs to happen.”

Hochul promised to make the popular alcohol-to-go program permanent, but unfortunately for Williams and the city’s drinkers, the state legislature omitted language that would have made the program permanent in the recently released state budget plans, though it could still become permanent through other legal avenues, the New York Post reported. Money, like that provided through the federal Restaurant Revitalization Fund — which only gave financial assistance to 34 percent of businesses that applied for it — would also be much appreciated, Constantinou added.

Looking to the future, Constantinou — who caught up with CO on March 14 while on a vacation with his family — felt grateful his business has survived, and hoped his experience running his three restaurants through the pandemic made him stronger.