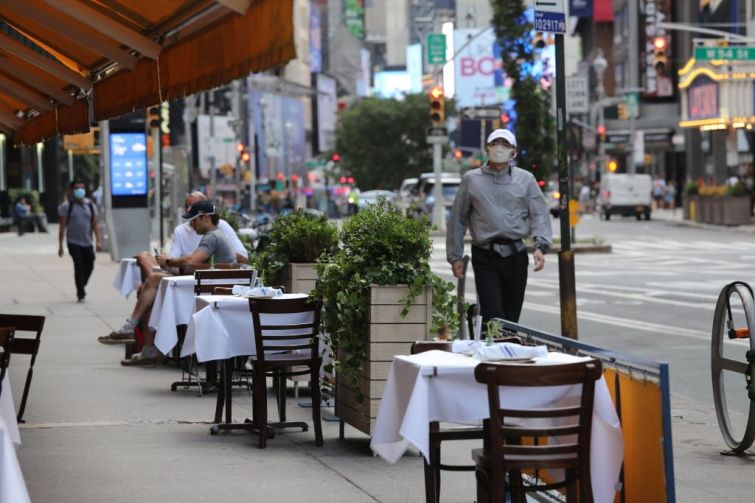 Even with outdoor dining and drinking, restaurants and bars in New York City continue to struggle and pay rent. Photo by Rob Kim/Getty Images

Even more New York restaurants were unable to pay their full rent in August as the coronavirus pandemic continues to decimate the industry, a new survey released by the New York City Hospitality Alliance found.

The nonprofit trade group polled nearly 500 restaurant, bar and nightlife business owners around the city and found that 87 percent could not foot their entire retail rent last month. Even with outdoor dining in full swing in August, the number of restaurants unable to cover the full rent increased from 83 percent in July and 80 percent in June, according to the Hospitality Alliance.

“Restaurants, bars and nightlife venues have been financially devastated by the COVID-19 pandemic,” Andrew Rigie, executive director of the Hospitality Alliance, said in a statement. “Even before the pandemic when operating at 100 percent occupancy, these small businesses were struggling to stay open. Now we’re seeing widespread closures, approximately 150,000 industry workers are still out of their jobs, and the overwhelming majority of these remaining small businesses cannot afford to pay rent. “

Last month, 34 percent of business owners surveyed by the trade organization reported not paying any rent at all while landlords don’t appear more forgiving as the pandemic continues.

About 60 percent of the owners said their landlords had not waived any rent during the pandemic — a decrease from the 71 percent who were unable to get rent waived in July — while nearly 61 percent reported their landlords had not deferred any rent so far, according to the survey. Meanwhile, 90 percent said they were unable to renegotiate their leases because of COVID-19, a 4 percent increase from June.

Of the few landlords who did waive rents, fewer than one-third waived more than 50 percent of the bill, according to the Hospitality Alliance.

The city’s restaurant industry has been battered during the pandemic, with thousands of workers laid off and thousands of eateries not expected to survive.

In mid-March, restaurants were forced to switch solely to take-out or delivery models to curb the spread of the disease and were allowed to offer outdoor dining in July. Gov. Andrew Cuomo announced earlier this month indoor dining can resume in the city on Sept. 30 at a 25 percent capacity after an outcry that included a $2 billion class-action lawsuit from restaurant owners.

“We understand the difficulties facing restaurants, which is why we’re protecting commercial establishments from eviction, allowing bars to sell cocktails via take-out and delivery, and cutting red tape so restaurants can easily expand outdoor dining,” Jack Sterne, a spokesman for Cuomo’s office, said in a statement. “We’ve achieved record-low infection rates thanks to a data-driven reopening strategy — we are using that same phased approach to re-open indoor dining in New York City and will continue working with our partners in the industry moving forward. This pandemic isn’t over and everyone is trying to avoid a potential second wave that would force businesses to close down again.”

Last week, the City Council passed a bill that would allow owners to charge a 10 percent COVID-19 surcharge to diners’ bills to help offset the costs of supplies required to stay open during the pandemic.