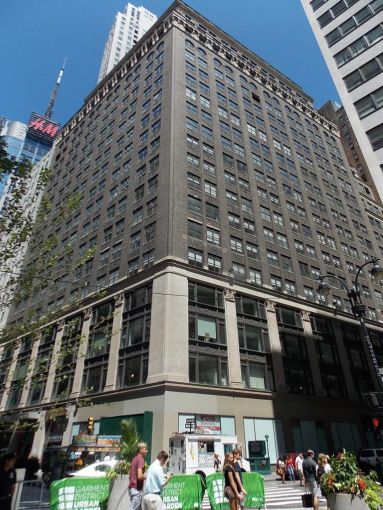 Land N’ Sea, a designer and manufacturer of various clothing brands, took 33,819 square feet on the third floor of the building at the corner of Broadway and 40th Street, according to the landlord. The apparel maker previously subleased the space from Sean “Diddy” Combs’ eponymous clothing company, which was subleasing from Kate Spade, as CO reported in 2018.

Meanwhile, contractor CNY Group has leased 34,025 square feet on the fourth floor of the building, where it has subleased space from Kate Spade since early 2020. CNY designed its own offices, which feature a 550-pound concrete reception desk imprinted with an overhead map of Midtown and a sandbox in the elevator lobby.

CIM did not provide the lease lengths or asking rents, though previous reporting pegs office rents in the building between $50 and $73 a square foot.

The landlord recently renovated the property, adding an updated entrance on 40th Street, a new lobby, a new roof deck, a tenant lounge and 21,000 square feet of outdoor terraces.

The largest tenants in the 25-story, 745,000-square-foot building between Times Square and Bryant Park are WeWork, with 301,000 square feet and Macy’s, with 197,000 square feet, according to The Real Deal. All of Kate Spade’s 67,000-square-foot space was previously subleased to CNY Group and Land N’ Sea at $27 and $43 a square foot respectively, TRD reported last year. A CIM Group spokesperson confirmed that with Kate Spade’s lease expiring, the two tenants occupying the space opted to do direct deals with the landlord.

The landlord’s in-house leasing team handled the transactions, along with CBRE’s Howard Fiddle, Brad Gerla, Paul Amrich and Neil King. A CBRE spokesperson did not immediately respond to a request for comment, and it wasn’t clear if the tenants had brokers in these transactions.