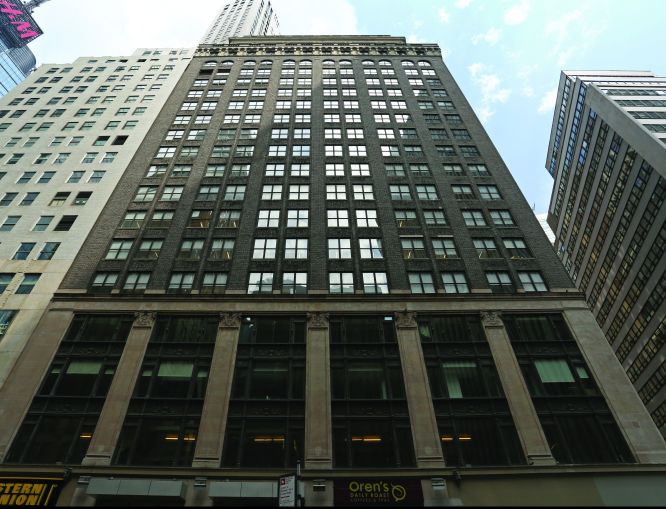 Coworking giant WeWork isn’t slowing down its rapid acquisition of space as the year comes to an end and it has nabbed one its largest leases this year in New York City, the company announced today.

WeWork inked a deal for 236,000 square feet in CIM Group’s 1440 Broadway between West 40th and West 41st Streets in a deal that closed last week, according to CIM Group and WeWork. The company is taking the entire 14th to 21st floors in the 25-story building, and will have a newly built private entrance and lobby on West 41st Street.

A spokesman for WeWork would not provide the terms of the deal or the names of the brokers involved and a spokesman for CIM Group did not immediately respond to a request for comment. CoStar Group data lists average asking rents in the Times Square building as $53 to $64 per square foot.

“Given the exceptional demand we’re seeing from companies wanting to be based around Bryant Park, we have continued to expand our presence in the area,” Granit Gjonbalaj, WeWork’s chief real estate development officer, said in a statement. “Today, we have over 10 locations within a 10-minute cab ride from the park, and 1440 Broadway will be among the largest of those.”

WeWork plans to open the location at 1440 Broadway next summer and already committed 80 percent of the newly leased space to an enterprise client, companies of 1,000 workers or more, a WeWork spokesman said, but declined to cite who.

The coworking company has been gobbling up office space around the city this year and in September claimed it surpassed J.P. Morgan Chase as the largest tenant in Manhattan with a 5.3-million-square-foot portfolio, The Real Deal reported.

News of its latest huge deal comes the same week as The Wall Street Journal reported that investors from SoftBank Group balked at a planned $16 billion investment into WeWork—which currently has a $45 billion valuation—over concerns about the strength of the coworking company’s business.

WeWork is set to lose around $2 billion this year and key investors in SoftBank’s fund are concerned WeWork’s business model makes it likely to be in more trouble if the economy drops, the WSJ reported. SoftBank is already an investor in WeWork with $8 billion contributed to the company.