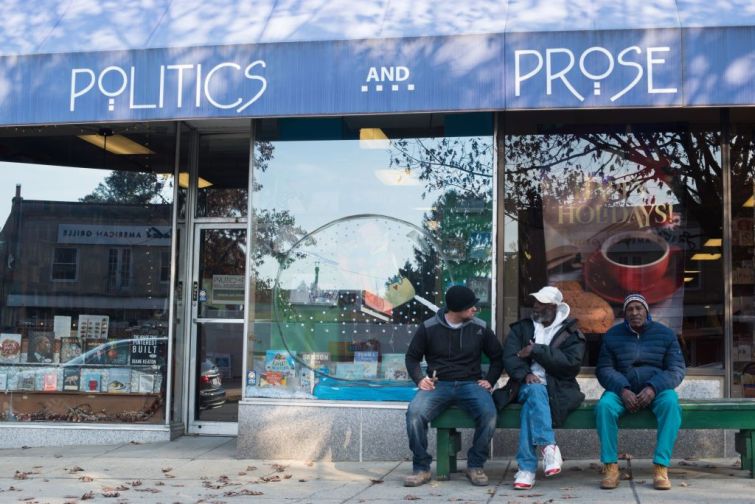 Three men sit on a bench in front of Politics and Prose bookshop in Washington, DC on Nov. 30, 2017. Photo: MARI MATSURI/AFP via Getty Images

Employees at the famed Politics and Prose bookstore in Washington, D.C., formed the district’s first bookstore union, the union and retailer’s ownership announced on Monday.

The married pair who own the store, Bradley Graham and Lissa Muscatine, decided to voluntarily recognize the union about three weeks after union organizers filed for an election with the National Labor Relations Board (NLRB) — the federal body charged with supervising union elections.

“We are proud to join the growing movement of booksellers and baristas across the country who have unionized their workplaces,” said the Politics and Prose organizing committee in a statement. “Forming our union has not only served as an affirmation of our shared values within the Politics and Prose community, it will also strengthen our workplace and ensure the long-term success of our beloved community hub.”

United Food & Commercial Workers Local 400, a labor union in the United States and Canada, will cover 54 positions out of the more than 100 Politics and Prose workers, and will represent the union at the bargaining table as the two sides discuss a contract for unionized employees.

Employees pushed to unionize for multiple reasons including pandemic-related staffing shortages, which had caused at least three employees to quit the bookseller, DCist reported.

Graham and Muscatine decided to recognize the union — rather than let the NLRB hold a vote — after facing backlash from high-profile authors and customers when Graham said that recognizing the union without a vote would “disenfranchise” employees who didn’t sign union cards or wanted more time to make the decision, DCist reported. The co-owners also hired Jones Day, a national law firm that is controversial for its aggressive tactics.

The two walked that statement back a week later, saying they were open to voluntarily recognizing the union. Muscatine and Graham also hired a new attorney, Kathy Krieger of the firm James & Hoffman, who has represented unions, individuals and non-profit organizations in civil litigation, according to the firm.

Graham declined to comment further on the nascent union and Politics and Prose union organizers and Local 400 did not immediately respond to requests for comment. Workers at the bookstore’s three locations previously told DCist that they hoped a union would make it easier to negotiate salaries and improve scheduling for overworked staffers.

Politics and Prose is far from the first business to see a union drive during the coronavirus pandemic. One early example was the Washingtonian Magazine, whose staff formed a 17-person union a month after the company’s CEO published a controversial back-to-office plan in an op-ed in The Washington Post.

The labor movement has expanded to the e-commerce and retail industries over the course of the pandemic as well. Amazon workers in Bessemer, Ala. and Staten Island, N.Y. warehouses have been fighting to unionize employees who work at the two distribution centers in each area. Workers at a Starbucks store in Buffalo, NY have voted for a union in a first for the coffee giant. Recently, white-collar employees at the large architecture firm SHoP Architects in New York City have started a union drive.

The growth of unions after years of eroding support is part of the broader and unprecedented shifts in the labor market. More than 4.5 million Americans quit their jobs in November 2021 in a record for the United States, The New York Times reported. The coronavirus — which has killed 821,2019 people in the U.S. — has also garnered more public support for essential workers who have not seen the benefits of rapidly rising profits by companies, Time Magazine reported.