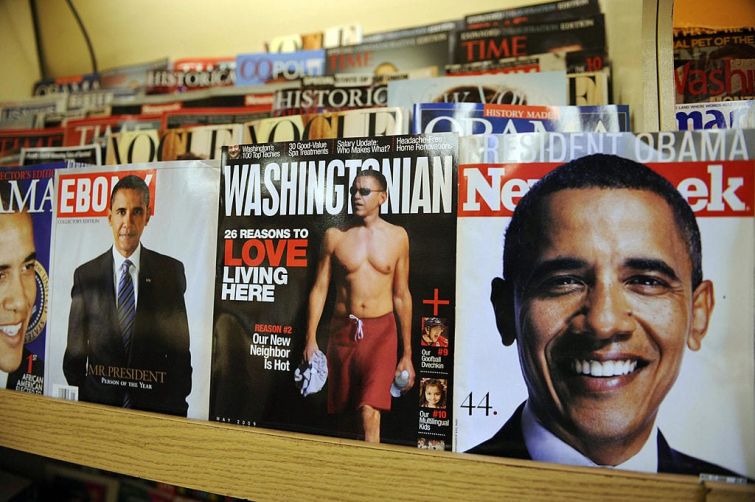 The Washingtonian and various magazines with cover photos of US president Barack Obama are seen at a news stand April 23, 2009 in Washington, DC. Photo: TIM SLOAN/AFP via Getty Images

The CEO of the Washingtonian — a monthly D.C. magazine and website — is in hot water with her employees after writing an op-ed in The Washington Post that many saw as threatening her staff if they did not return to the office. She’s since walked her statements back in an internal memo, but not before the Washingtonian decided to halt publishing for the day.

CEO Cathy Merrill’s piece, published in WaPo on Thursday, outlines her concerns with “the unfortunately common office worker who wants to continue working at home and just go into the office on occasion.” The piece’s original headline read: “As a CEO, I want my employees to understand the risk of not returning to work in the office.” (The title was later changed.)

In it, she made some of the conventional arguments for the office, such as its ability to foster culture, attract talent and develop employees.

But the piece quickly drew fire for a section that argued that employers had a “tempting economic option” to demote employees to “contractor” status if they chose to miss out on “extra” in-person office interactions. (The description of those “extras” were roundly derided: “I estimate that about 20 percent of every office job is outside one’s core responsibilities — ‘extra,’” she wrote. “It involves helping a colleague, mentoring more junior people, celebrating someone’s birthday — things that drive office culture.”) A demotion to contractor would result in an employee’s loss of health care, 401K matching and other benefits, she wrote.

In response to the opinion piece, the Washingtonian is going dark Friday. In a coordinated effort, at least a dozen editorial team members announced on Twitter, using the same language, that they would not publish online articles for the day — notable for a publication not represented by a union.

The opinion piece caught the entire Washingtonian team off guard, said one editorial staff member who spoke with Commercial Observer.

“We just felt a little blindsided and pretty insulted after all of the work that we’ve done over the past year and a half to try to keep making a good product in the midst of a really crazy, difficult time to be a reporter,” the staff member said.

Merrill’s comments on health care were particularly striking, given the context of the global coronavirus pandemic, which has forced reporters industrywide to work remotely.

“We’re just a little baffled,” the staff member told CO. “In the middle of the pandemic, to have health insurance brought into the conversation for us, I think, was definitely very concerning.”

The editorial staff member confirmed that the magazine’s website would not publish online on Friday.

Employees of the Washingtonian have not stopped all work, Senior Editor Andrew Beaujon told CO. The editorial team is in the process of closing their print magazine, and many reporters are trying to get ahead on their next stories. 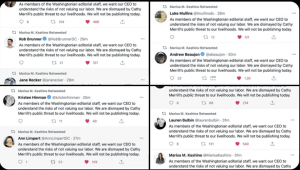 Adding fuel to the fire was the original headline of the op-ed on Thursday, which was addressed to employees.

“Now, I don’t know who decided on that headline,” said the staff member. “But given what was written in the article paired with that headline, I don’t know how anyone could read that not as a direct message to the employees of Washingtonian when it was first published.”

The magazine is still figuring out what a return to normalcy looks like, and the conversations hadn’t even touched on an all-remote option, the staff member said.

The headline was changed the following morning to, “As a CEO, I worry about the erosion of office culture with more remote work.” Editorial Page Director Fred Hiatt made the change for WaPo before he knew about the protest, WaPo told CO.

“I asked our team to change the headline early this morning to something that I thought better captured the piece,” Hiatt wrote to CO. “Nothing else in the oped has been changed. Our policy, when we update an already published piece, is to be transparent and note that it has been updated. But we test and change headlines frequently and routinely.”

WaPo did not respond when asked who authored the original headline.

Merrill walked back her statements in an internal memo to staff on Friday, saying flexible work schedules, health and 401K benefits would not change. She also said she would not switch full-time workers to freelancer status, according to CNN.

“Washingtonian embraces a culture in which employees are able to express themselves openly,” Merrill said in a statement to CNN Business. “I value each member of our team not only on a professional level but on a personal one as well. I could not be more proud of their work and achievements under the incredibly difficult circumstances of the past year. I have assured our team that there will be no changes to benefits or employee status. I am sorry if the op-ed made it appear like anything else.”

The Washingtonian staff is still working from home, though the magazine’s office is open for those who need to come in or get out of the house.

Merrill did not immediately respond to requests for comment.